Decided to post few pics of a project I'm doing at the moment, 3D printed Suzuki Samurai hard body. The model is not my design, it's from Thingiverse: https://www.thingiverse.com/thing:2956295. I have combined some STL files with Meshmixer to reduce amount of gluing though. 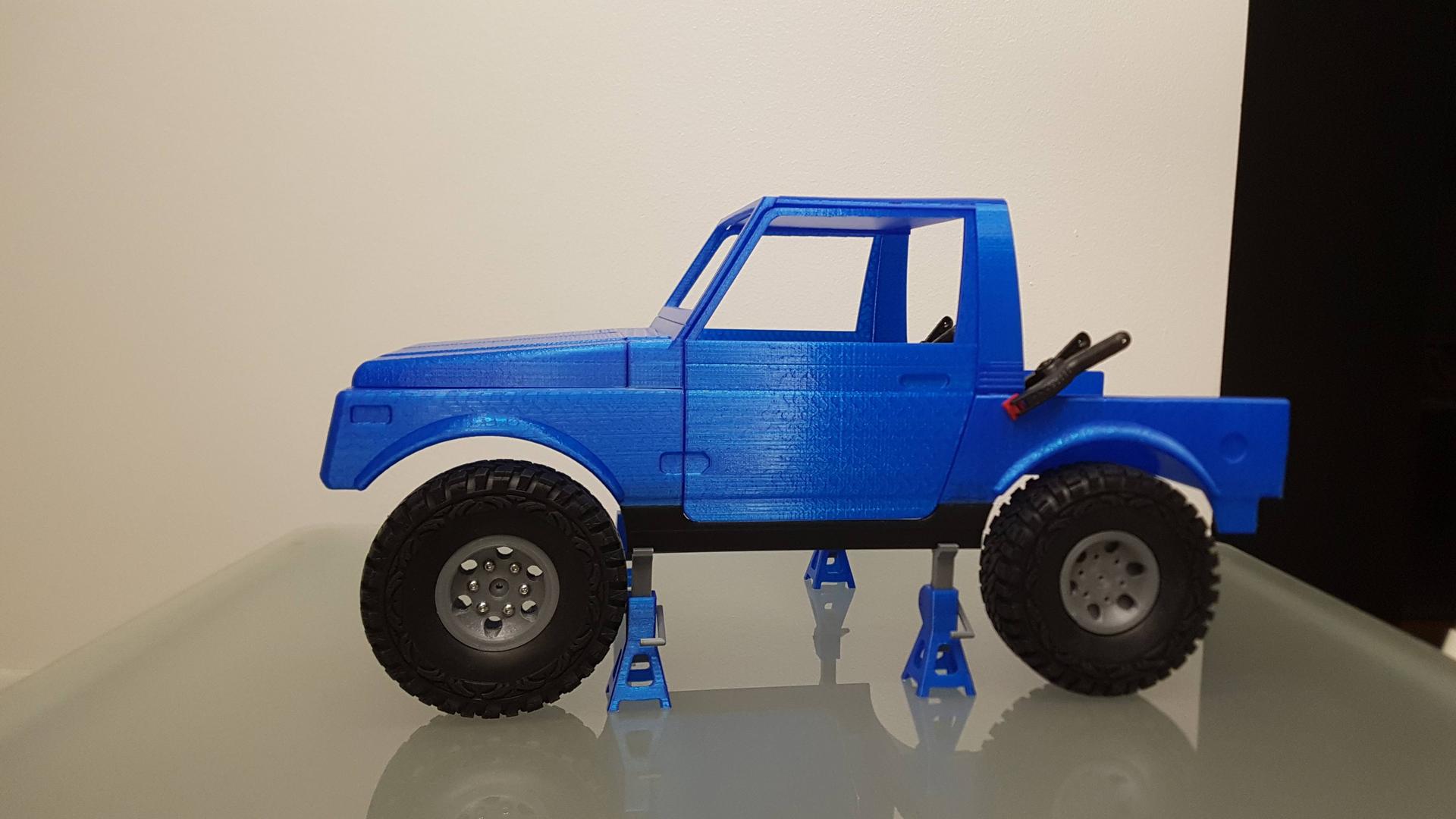 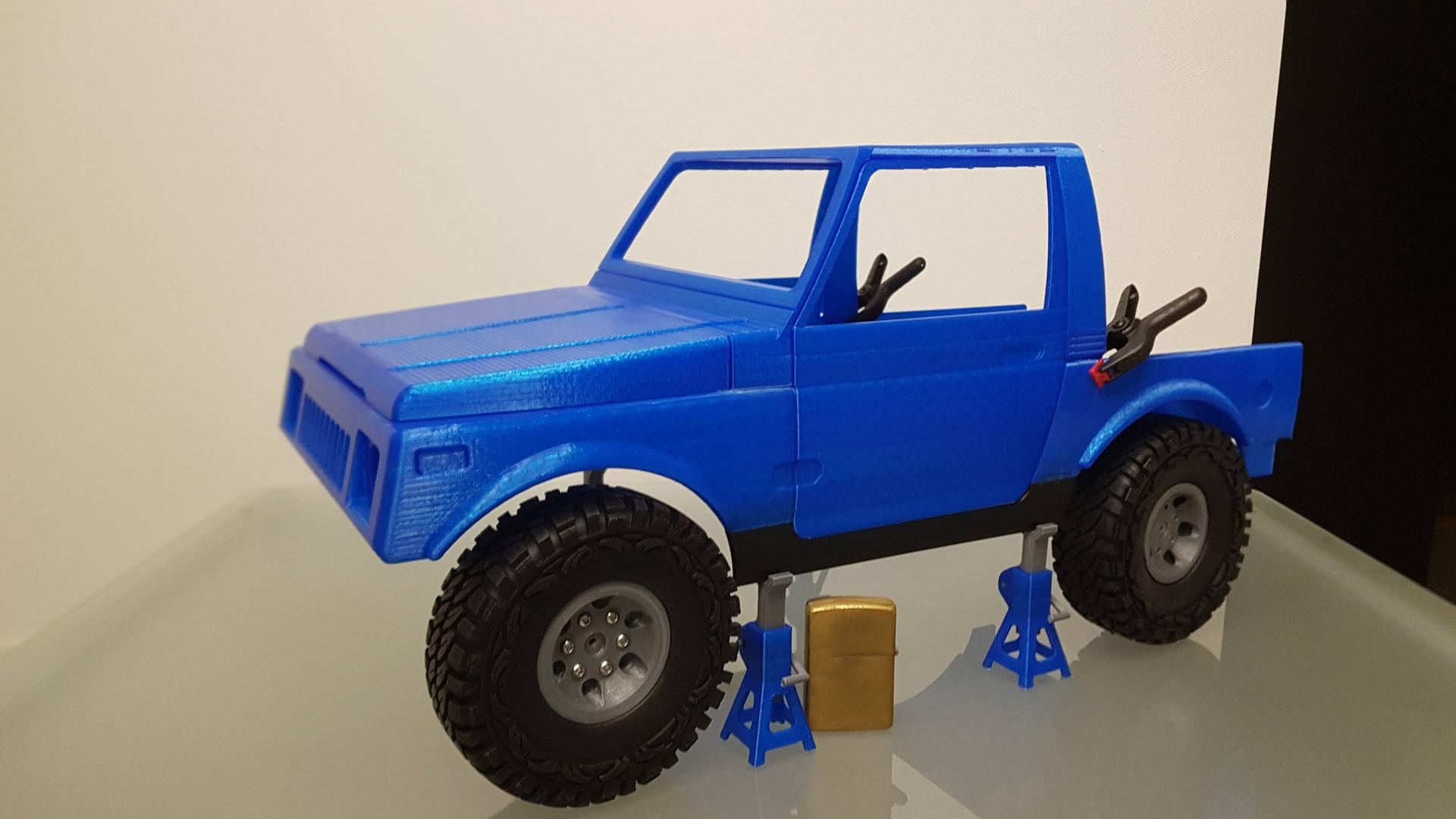 Didn't have a banana so there is a Zippo for scale 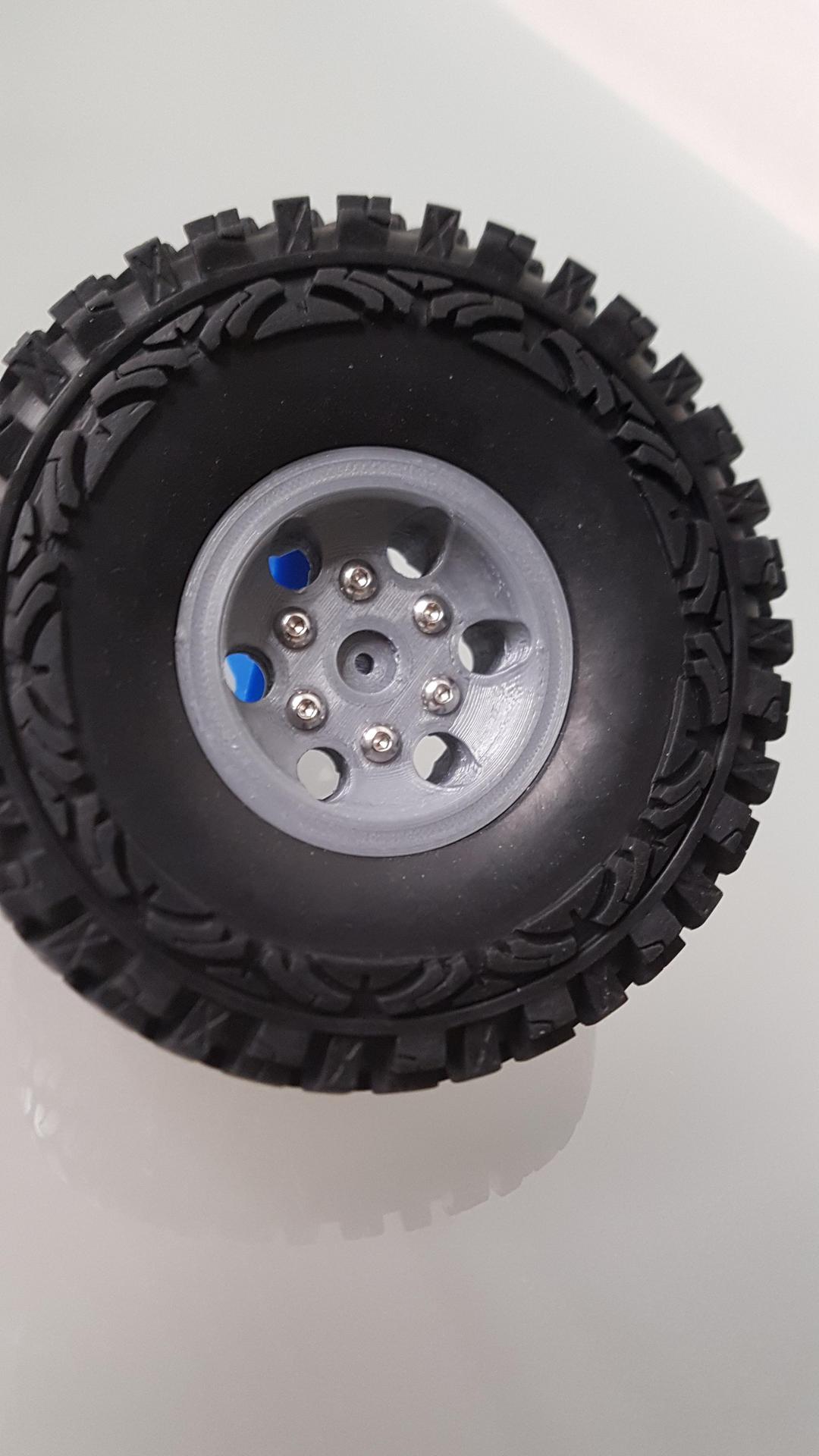 These three piece beadlock wheels are my own design. Tires are cheapest ones from Banggood just for now. The tires are a bit too big, OD is 114mm. I'm actually thinking about going with 1.7 inch wheels instead of 1.9. 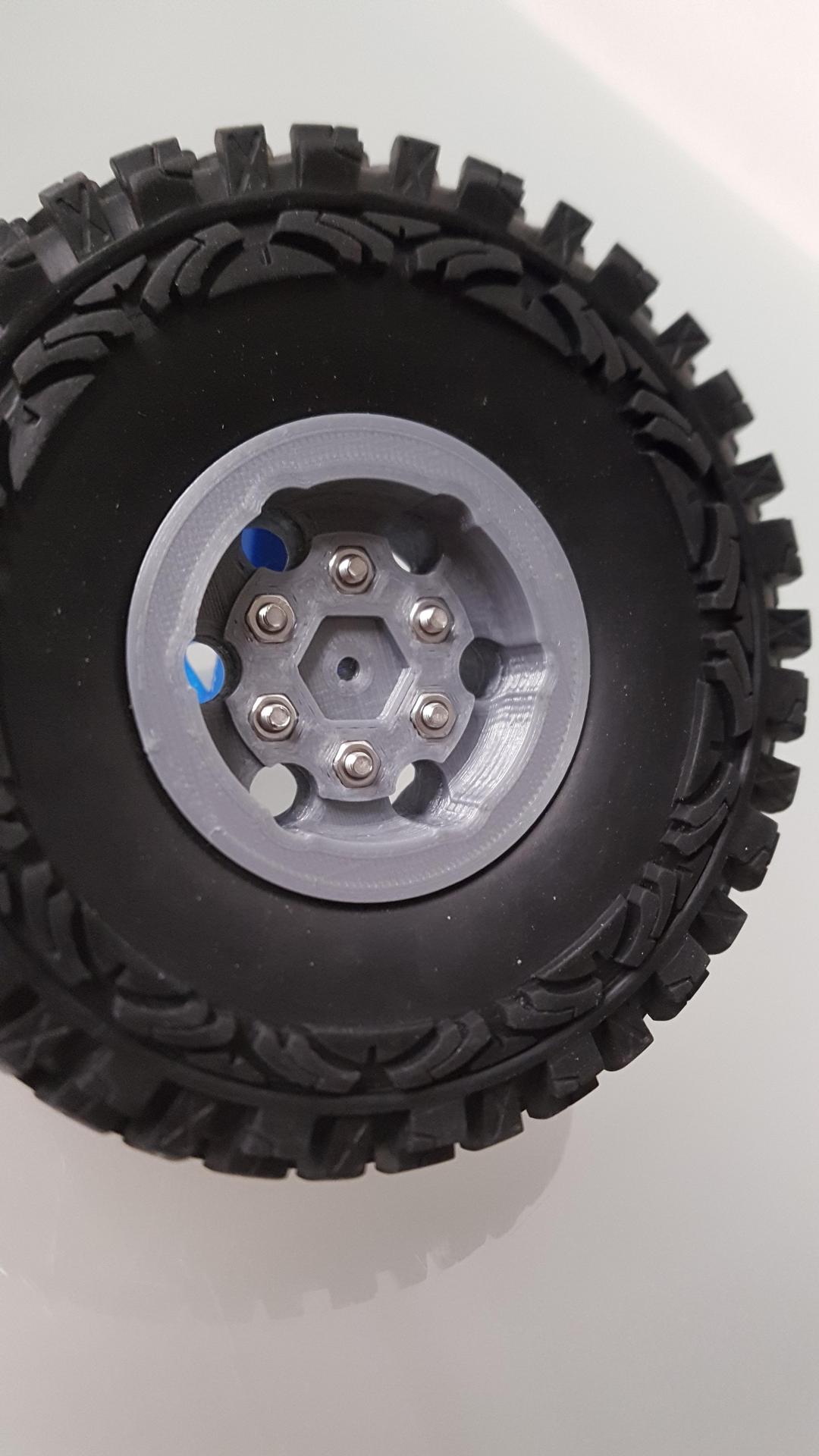 Current body in the pictures is scaled to 1:8, it has WB of 302mm and idea was to use SCX10 II or TF2 frame but now I'm contemplating on reprinting it in 1:10 scale to make it more "compatible" with other scalers, don't want to have an ugly giant next to those nice 1:10 Jerps. Scaling it down to 1:10 will shorten WB to 241mm which is quite short and I'll most likely have to make a custom frame for it. The model in Thingiverse doesn't have other interior than dashboard so I have to model one once I get the body and frame figured out.

This build is actually my first scale crawler build. I had RTR Wraith some years ago but ended up selling it due to lack of spare time. Now after getting a 3D printer a while ago I have caught the crawler fever again. I'm planning on getting an SCX10 II raw builders kit and Wrangler hard body later this Spring to accompany this Samurai. The Samurai will, at least at first, have 3D printed axles and transfer case so I want to have some proper crawler also as the Samurai might not be really reliable. Later I may get TF2 axles for it but first I want to try what 3D printed power line can take. I have actually designed the axles already but they are missing mounting points for leaf springs as the springs haven't arrived yet.

Edit: oh, and just in case someone is actually interested about the 3D printing. This was printed with Tevo Tarantula and material is PLA. Infills etc. vary a bit. The body is 460mm long and it has taken about 50 hours to print it. I have 200x280x200mm printing area on my Tevo and most parts have actually been printed standing, for example doors and bed were printed that way. I'll add few pics of the printing process if I have any good ones.

It's certainly not ugly, nice job on the printing. Scaling down to 1/10 might be to your advantage thow for sure.

I drank the MEK

Looking great. I also am printing the same files, but i resized it so that it will fit on the 1.9 Barrage. Its slightly bigger than 1/10 scale but doesn't look bad besides other simular scaled trucks

Wheelbase would be quite short with 1:10 body and that might lead to bunch of problems. I'll build this and see how it goes, maybe scale down to 1:9 if this on is too big. I ended up ordering SCX 10 II frame rails, I'm not sure how well those rails suit leafed car but we will see:lol: I tried printing some frame rails but those were way too flimsy, might work for prototyping purposes while I'm waiting for the rails to arrive but to be drivable it would require too large cross members.

I drank the MEK

here's the link to the build thread that i start on here for it a while back. Most likely will get back at working on it soon. http://scalebuildersguild.com/forum/showthread.php?27939-Samurai-Barrage

skinanbones said:
here's the link to the build thread that i start on here for it a while back. Most likely will get back at working on it soon. http://scalebuildersguild.com/forum/showthread.php?27939-Samurai-Barrage
Click to expand...

Here are few pics of the printing process. These may look a bit weird but after some testing I came to conclusion that this way I got best surface quality with shortest print time and least supports. 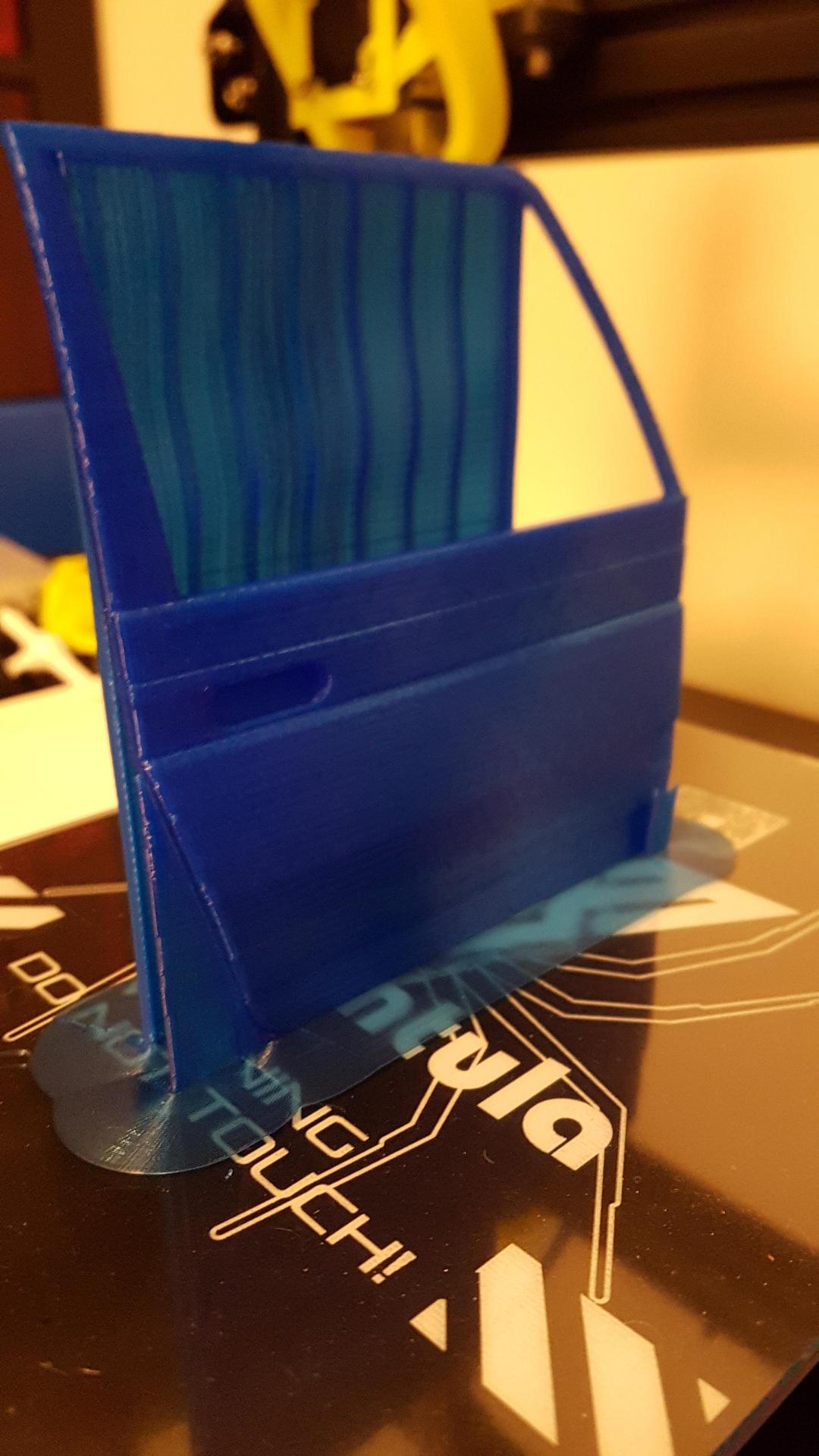 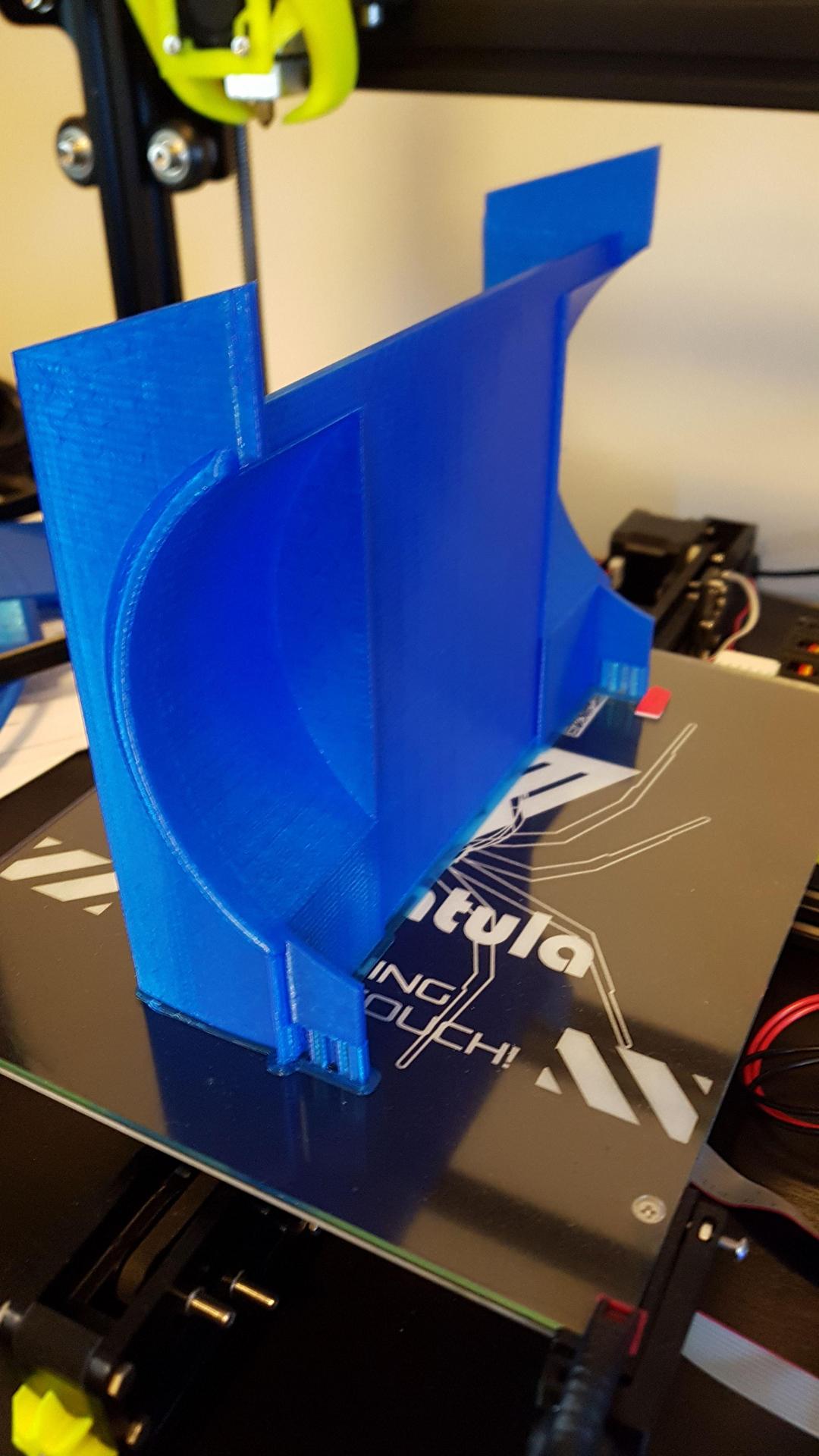 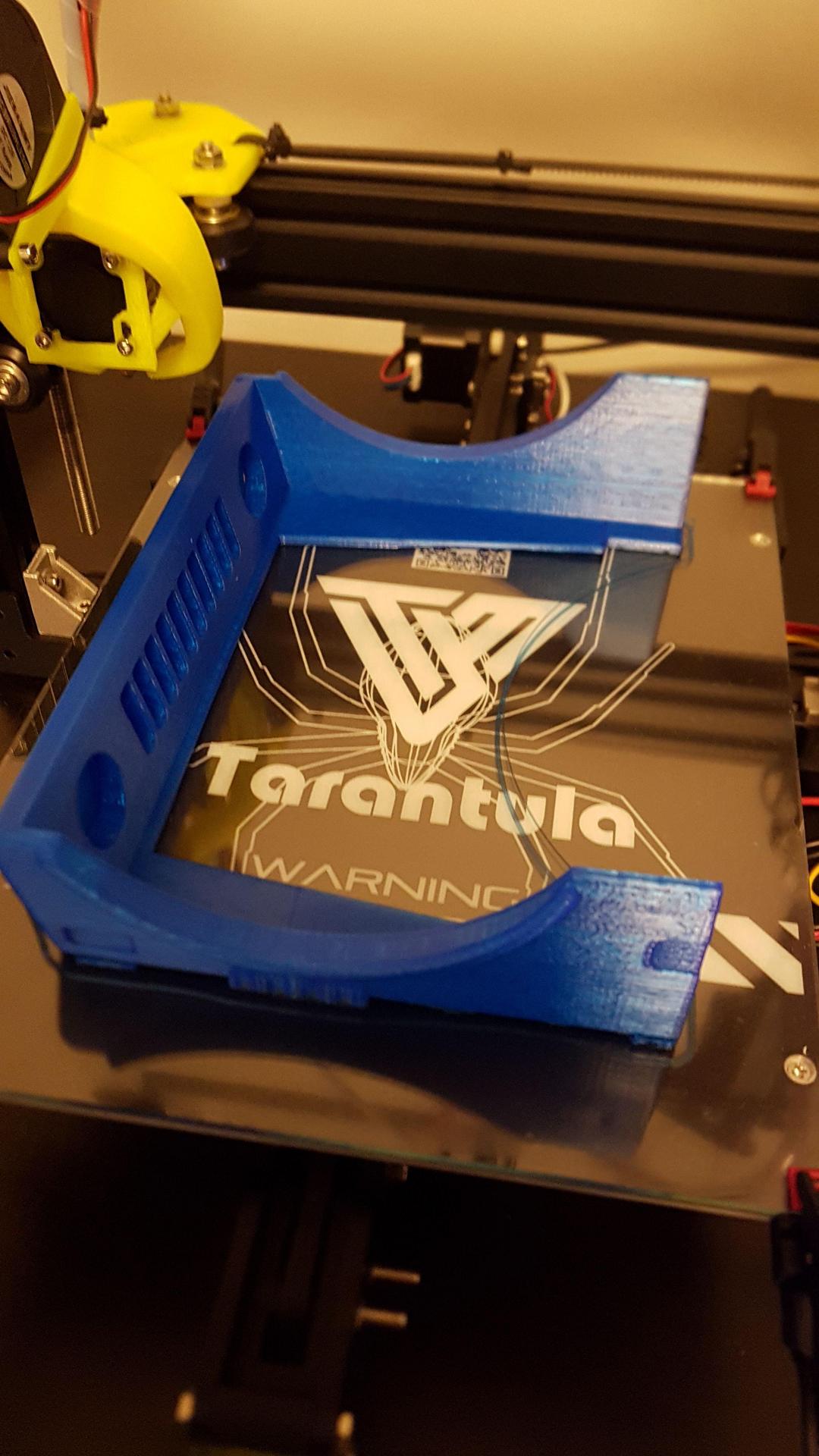 Looking really good so far. Thanks for the thingiverse link, might just have to finally do my samurai dream car

onetruescooty said:
Looking really good so far. Thanks for the thingiverse link, might just have to finally do my samurai dream car
Click to expand...

Thanks! Of course, I feel that it's mandatory to share as all the credit belongs to the person who made the model and shared it in Thingiverse. That's great to hear, I looking forward to seeing your build thread!

The leaf springs arrived few days ago and after some fitting and sketching I'm angling towards reprinting the whole thing in smaller scale. Also my Wrangler body arrived and Sammy is just too big next to it. But before I start from beginning I'll wait postman to bring me frame rails, transmission and transfer case so I can make final decision of the wheelbase I'm going with.
C

That is actually excelent idea. I have had this build in hold as I've been busy doing other stuff but I'l activate again with the Samurai soon and I think I'll look for frame with shorter wb as it can't be 313mm as it would make Samurai look huge next to other "1/10" cars. Thanks!
C

very nice work. how many hours of printing do you have?

Thanks! The 1:8 body with 313mm wb took around 70 hours but it's huge compared to other ~1:10 trucks so I've put this project on hold until I have time to print it again in 1:9 scale and maybe in PETG instead of PLA.
You must log in or register to reply here.
Share:
Facebook Twitter Reddit Pinterest Tumblr WhatsApp Email Share Link
Top