Here's the latest tire from BoomRacing: 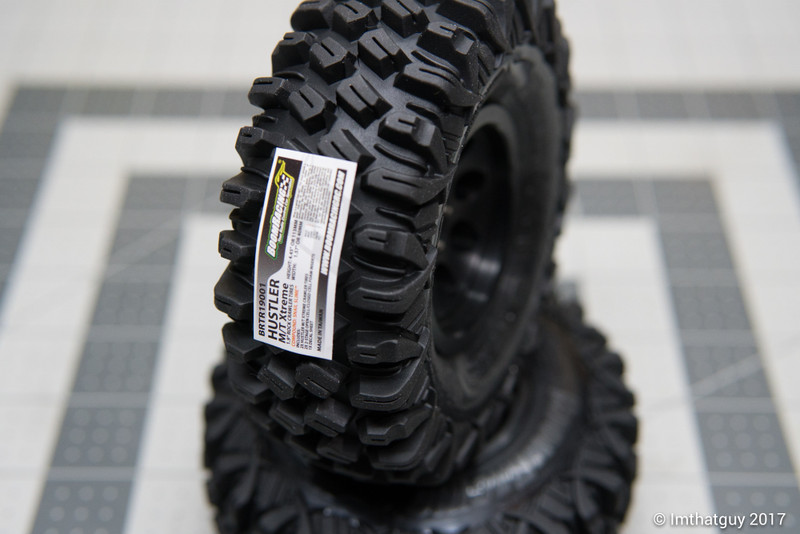 There's a lot of interesting stuff going on here. First, let's talk about the Snail Slime compound. It's very sticky and comes in two compounds, soft and super soft. You can imagine that the super soft one is softer than the soft. Still with me?

It's very pliable, and is probably the softest compound I've seen in a tire as of late. As soft or softer than Pit Bull's Alien compound for sure. It should hook up quite well, and because of the tread pattern, the lugs do a nice job of biting around objects. there's plenty of siping and the lugs move well.

Tread depth is above average, and tows the line between believable scale accuracy and pure performance. You could look at it from a distance and imagine that it could be a real tire. The sidewall is not my cup of tea, but they did nail the look of an aggressive tire, that's for sure. I'm going to say they're tusks from a Warthog Gigolo... Up close though, it doesn't totally resemble a real tire, so for looks, I'd rate it a 7/10.

Foams are a nice improvement over the typical stock foam. It's a two stage medium firm inner and soft outer. Not overstuffed and has plenty of heft to keep the tire from folding over. It's not as firm as I'd typically run, but it's a massive upgrade from what people are used to. Is it as good as what Crawler Innovations is doing? Not quite, but it's very close. So close that I wouldn't bother to replace them - and that's a good thing.

Mounting goes fine on most wheels - RC4WD's wheels are notorious for not working with other brands and that's sort of the same deal here, but your mileage may vary. I thought they looked quite good on these old GCM wheels I had lying around. There's a lot of cool little words printed on the sidewall, lots of great details. Yes, I enjoy being a badass. Even those little tire stickers are included. I'll leave mine on for testing. 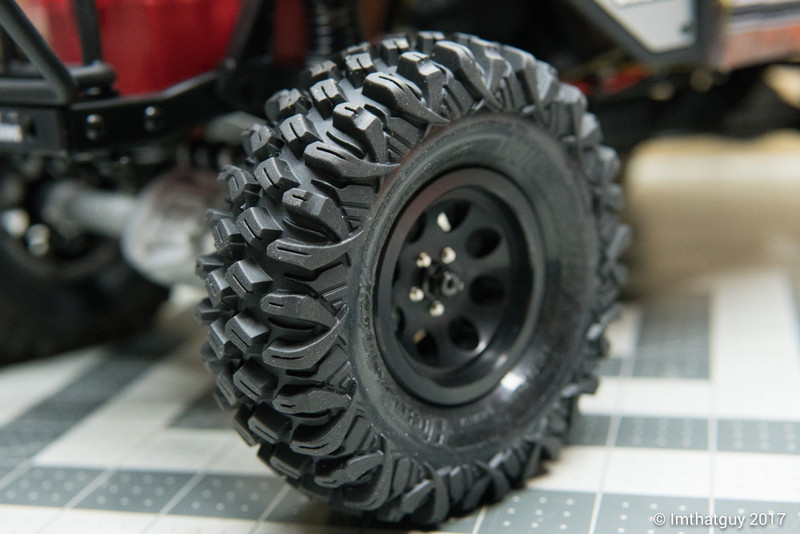 Watch this space for a running tire test at Smiggin's Folly in the next few days. I'm excited to see how they perform!

The specs are as follows:

Certainly plenty of tread on those badboys!
Who comes up with these compound names though?! Snail slime, Alien Kompound? It's like they surveyed a group of ten year old boys..

I thought slime was slippery, not sticky?????

H2Micr0 said:
I thought slime was slippery, not sticky?????
Click to expand...

So here's some follow-up thoughts based on a run through Smiggin's Folly with the SR5. 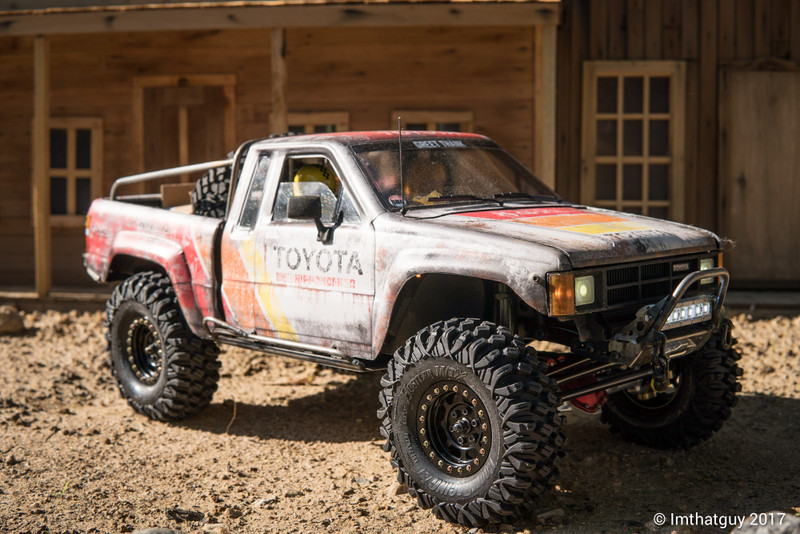 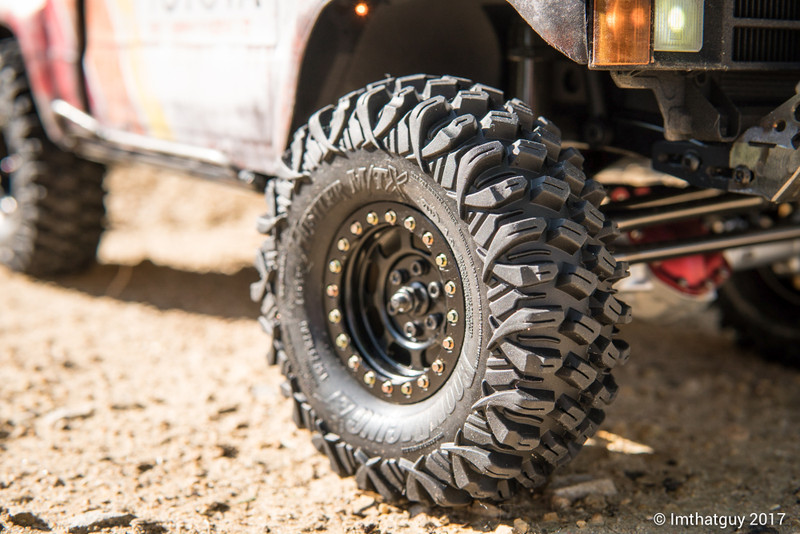 I thought that the inner foams were too soft to support the sidewall in tight areas, which caused the tire to fold over a bit. This is easy to overcome with a harder foam compound, especially in the inner ring. However, I'm testing these as-is out of the box. I've heard from my contacts at Boom that there will be better foams coming soon. 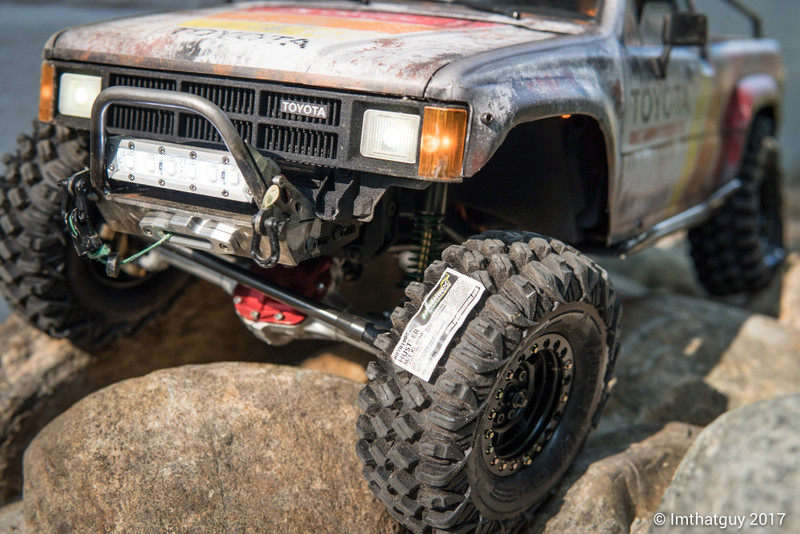 Because the tread is so deep, and the compound is so soft, I found that the lugs would just fold into each other not allowing for much grip in rocks. That said, the performance in looser soil and gravel was on par or better than my expectations. They did not do as well as a comparably sized tire in rocky environments though. Because the spacing is so wide between the tall lugs, the tire couldn't develop grip when trying to lift itself over an obstacle. 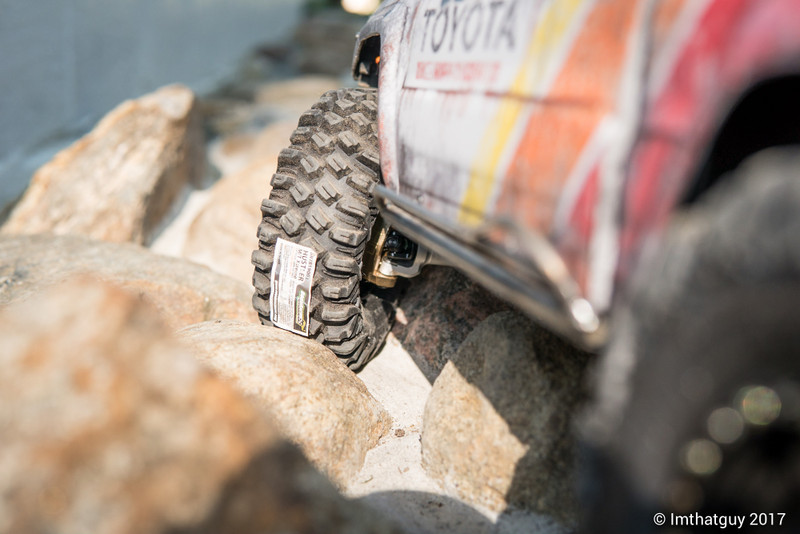 I imagine that this tire probably performs better in wet conditions, seeing that the lugs have so much depth and spacing, they probably clean out quite well. I'd like to try it again with a firmer foam and in a few other conditions, but since Smiggin's Folly is a good indicator of the typical terrain I run in, it seemed like the best place to try them out.

All of this of course, in the opinion of one man. your mileage may vary, and you may get better results than I could. The rubber compound is very sticky, pliable and grippy under the right conditions. If Boom can make this compound into a taller, more conservatively spaced, shorter lugged tire, they may have something. Heck, even a smaller 1.55 tiny tire class might be the ticket. 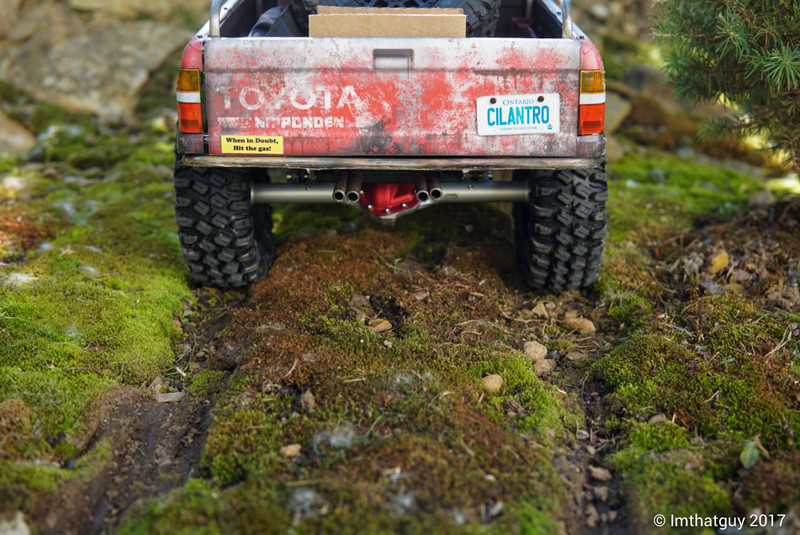 Thanks for the review: it's a big help to hear honest reviews of products before purchasing. I hope they continue to work with these tires (and maybe a 1.55 version)...

bit to chunky for me though
Thanks for sharing

Take me 2 ur Tiny Trucks.

I really like the way they look on your truck im a big knoby aggressive tread kind of guy so I got a set of super softs on the way...Thanks for the review.
1

So let kick this thread a little....
As A'tees is my sponsor i had the privilege (tire freak as i am) to be one of the testers of these tires. I even made a few video's on 'm.
Truth is, when they asked me to test those Hustlers i didn't now what to expect. Tires from China?
But i was in for quite a surprise. By now i know a little where they got their compound so that explains it a bit to me. Fact is that i was blown away by the Hustlers.
We all have our favorite spot to drive. We know the rocks and mud there, we know where the tricky lines are and how our rigs will behave on those surfaces.
I took my 9 pound heavy Warlock rig to do the testing and on some lines they even outperfomed my Rockbeasts and Klr's. Wet rocks? No problem. Dry rock without breaking a sweat. Even on mosh and (slightly moist) wood they kept on going.
Imo their weak spot was on sand. Mud they where mediocre. Due to the wide narrow tread pattern the mud was more easily pushed out of the tread pattern then with the Rockbeasts.
Dunno if i am even allowed to tell, but they very soon will come in a 4.1 and 4.8 version. We even are pushing Boomracing to come with a 1.55 4.0 and 2.2 5,5 version. We may succeed in our efforts soon :)
P