I?ve had a Mojave II body kit sitting on my parts shelf for over a year, and finally figured out what I wanted to do with it. I envisioned this rig as a desert barn find restomod. (i.e. taking an old abandoned Yota that had spent years baking in the sun, restoring it mechanically, updating to a linked suspension setup, and adding some trail armor, but leaving the desert patina pretty much untouched). 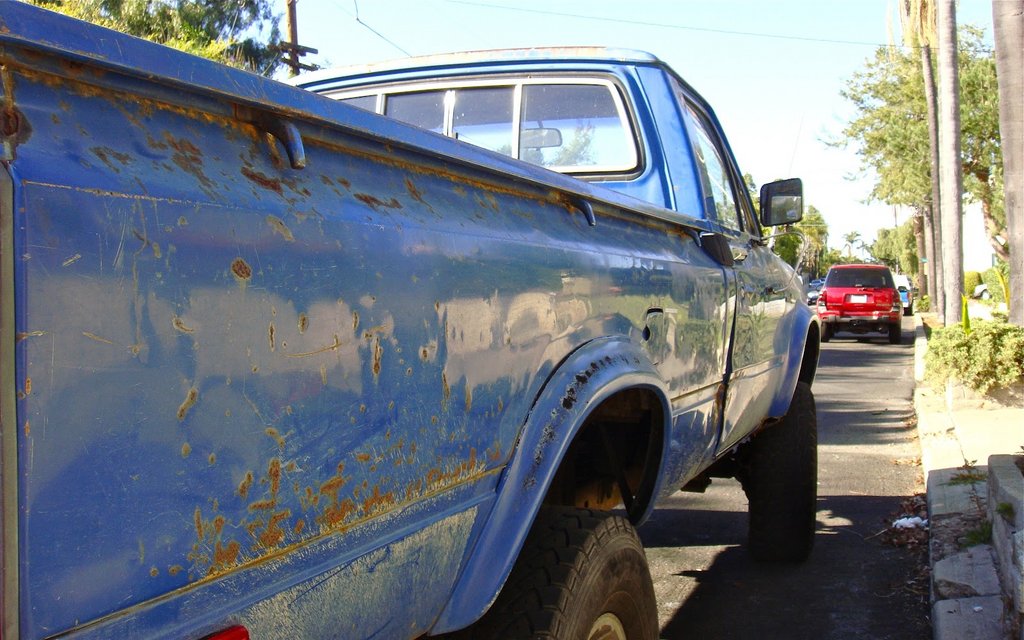 In my planning and research process, I learned of RexRacer19/Mod19RC?s mounting solution for the Mojave body on a SCX10-II chassis. So I went ahead and ordered a the body mounts and inner fenders from Shapeways. This made mounting the Mojave body a breeze on the SCX10-II chassis. I borrowed heavily from RexRacer19's approach on his Class 1 Hilux build, as you will see... Many thanks to him for the inspiration and the cool products! 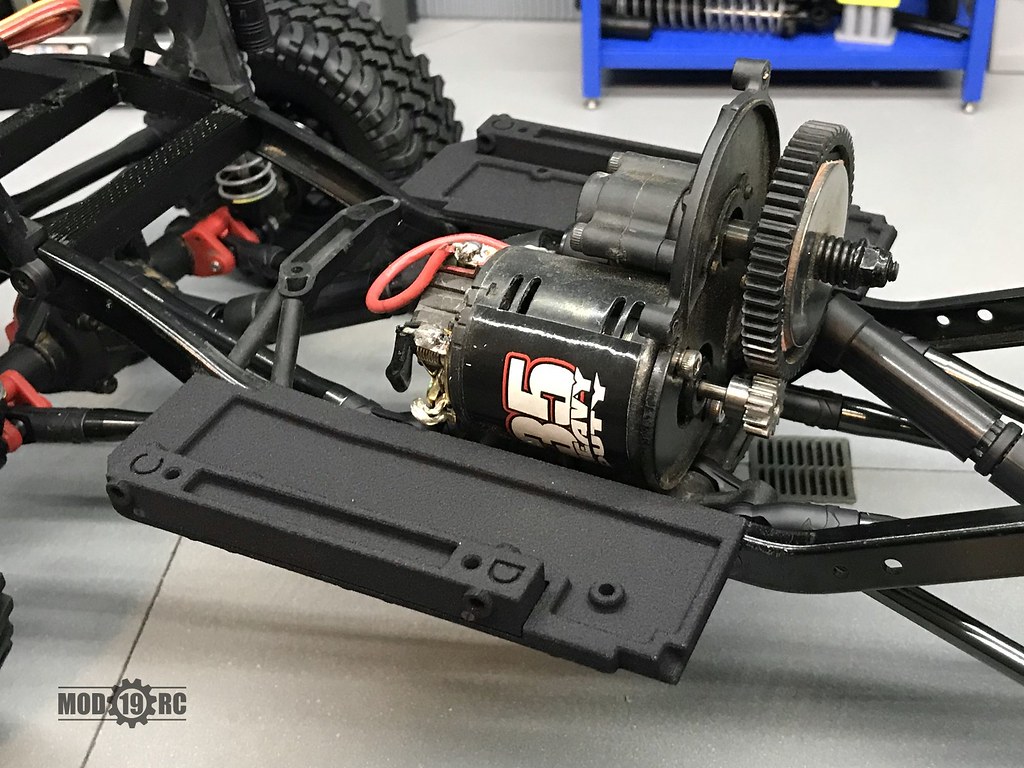 AR44 axles are great. They?re very durable, perform well, and are easily upgraded. I use them a lot. But for a stock-ish look on a Hilux body, they are little too wide. There are some workarounds to make AR44?s look right on narrow bodies by using really thin hexes, or wheels with a ton of positive offset. But I had another option. I had invested in a set of narrowed AR44?s from Beef Tubes a while back, and I?m really glad I did. I?ve used these axles on a few other builds with narrower bodies, and they make it really easy to get the right track width. The SCX10-II rig I took these narrowed AR44?s off of had a Pro-Line Gladiator body on it. The narrow axles almost made that body look decent ? no easy task. 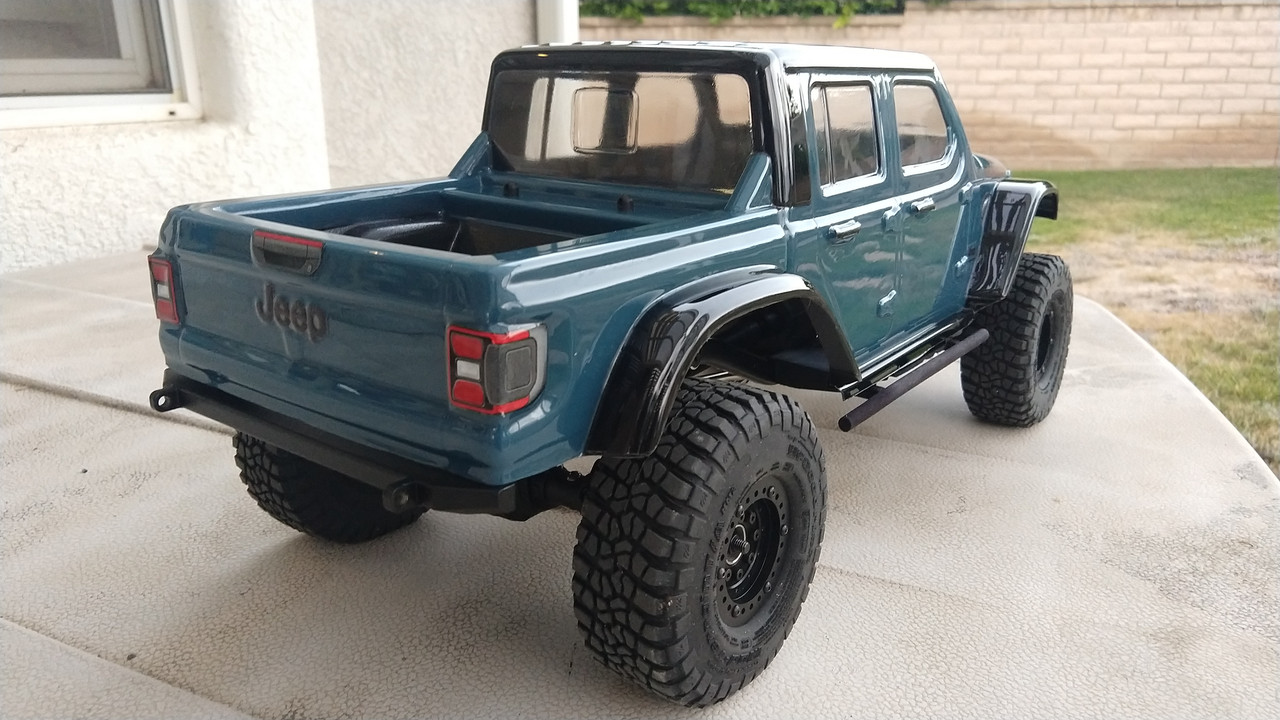 This being a rig where appearance was more important than performance, I didn?t want to cut holes in the bed for the rear shock towers. I ended up basically copying RexRacer19's cantilever setup using Vaterra Twin Hammers parts. It is very clean-looking, and highly functional. What I liked best about it was that the connecting rods come straight up vertically from the axle to the cantilever arms. They aren?t angled forward like many of the off-the-shelf cantilever kits. They end up looking pretty much like shocks. 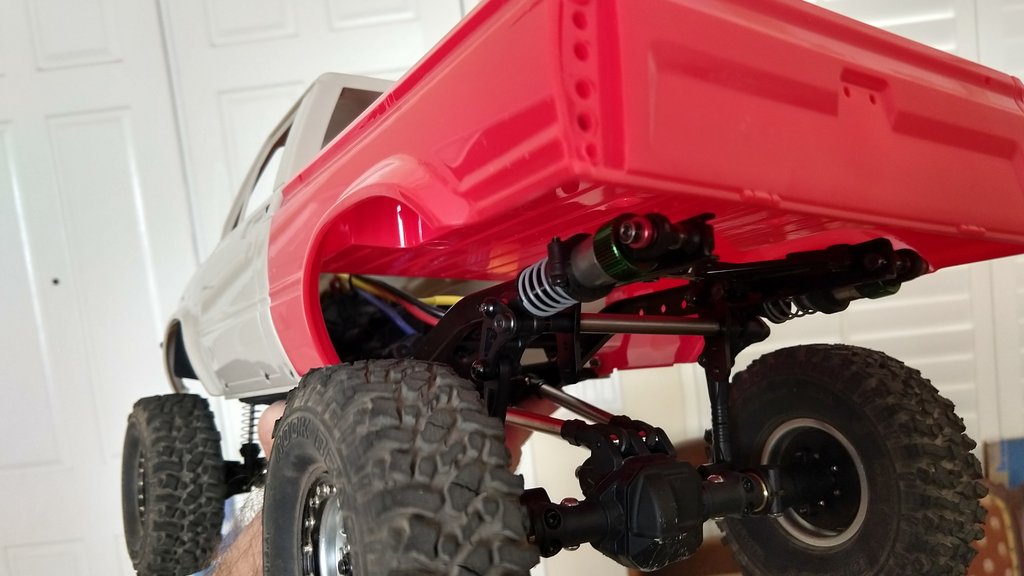 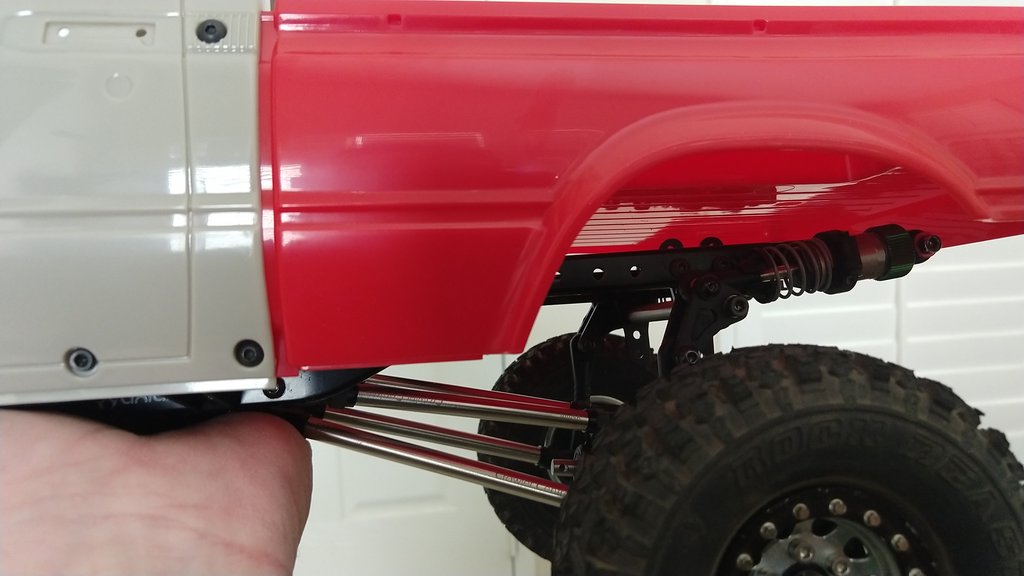 It took a little hunting around to source all the Twin Hammers front suspension parts that were needed, and I don't have access to a 3D printer, so I had to improvise a bit on the mounting of the cantilever arms. With the purchase of a couple cheap shock keys off eBay, I was in business. 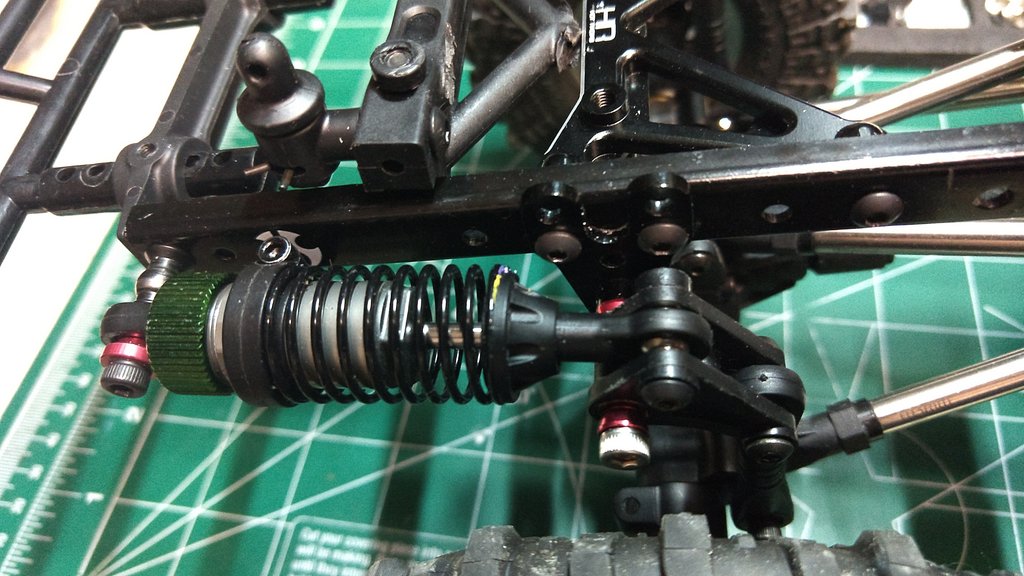 I?d heard that tuning cantilever shocks can be tricky at times. So I just followed RexRacer19?s recipe: Light springs, light shock oil, and drilled a couple extra holes in the shock pistons. That did the trick. I?m getting plenty of travel, and everything cycles very smoothly. For front shocks, I decided to use a set of TRX-4 shocks modified to work with Mini-T springs. I?ve used that shock setup a bunch of times before, and really like it. 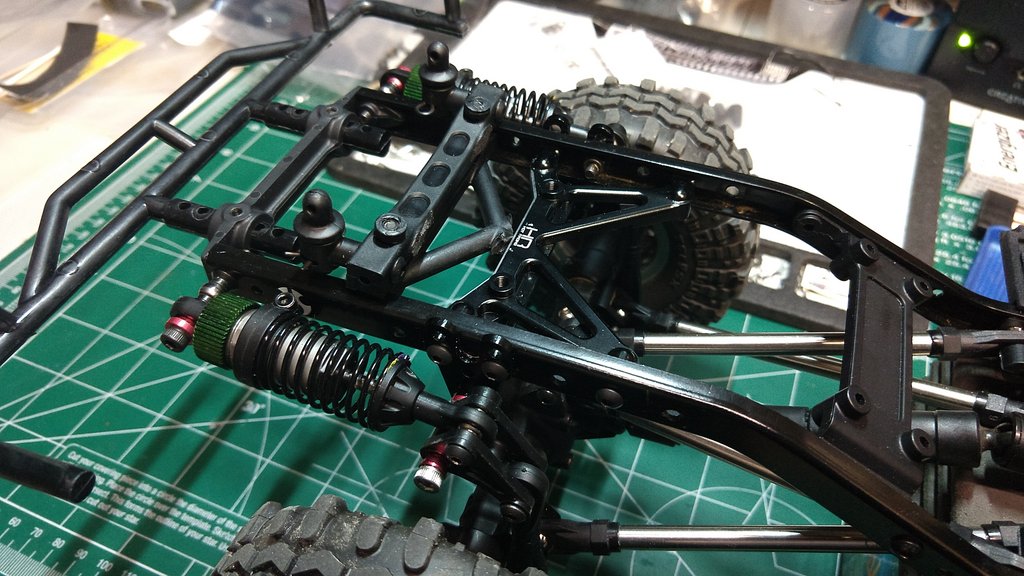 Once I had the suspension sorted, I turned my attention to the transmission setup. Though I have several Axial rigs, I had never used the ?kit? transmission before. I know they aren?t all that different from a 3-gear trans, but I wanted to have a little more room for an interior down the road. I used the Bowhouse forward mount transmission cradle to flip the kit trans around for a little better weight distribution. I am also using the Bowhouse HD battery tray and servo mount to get the battery all the way up front. 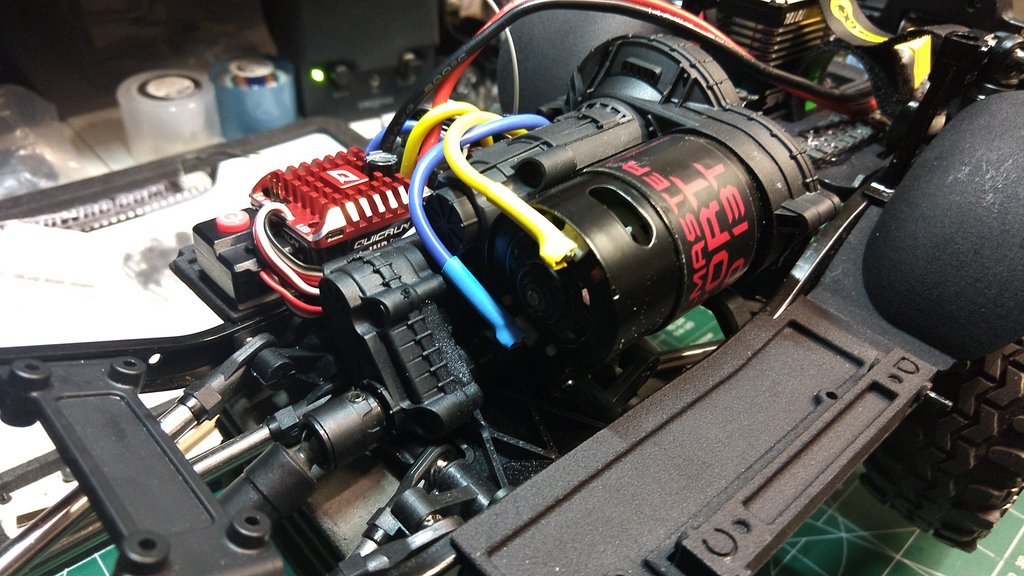 For electronics, I?m running the tried-and-true Hobbywing 1080 ESC and Holmes Hobbies Crawlmaster Sport 13T. I believe I have a 11 tooth pinion to get the lowest possible gearing with the kit transmission. My steering servo is a ProTek 370TBL. 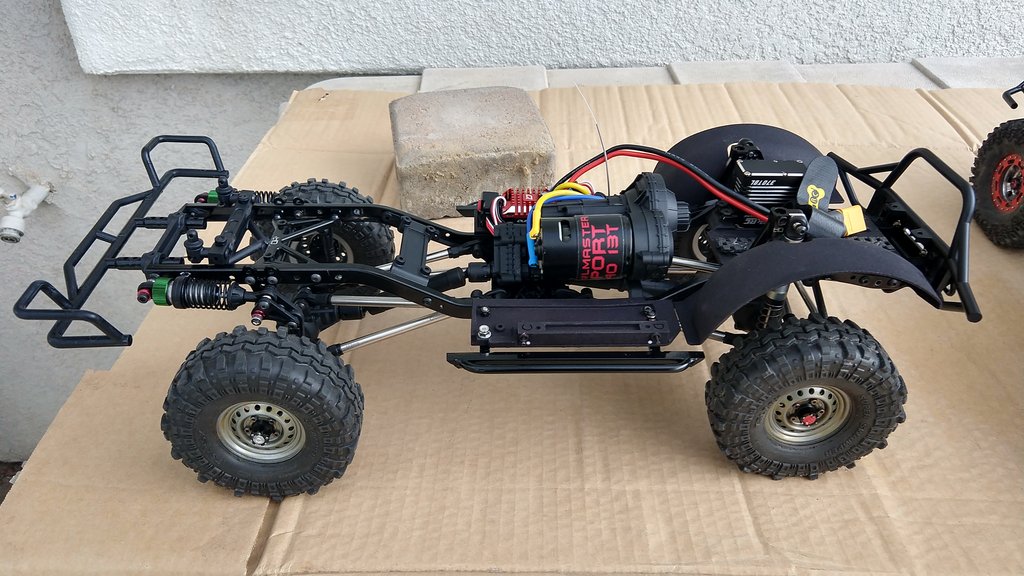 This was my first attempt at painting a hardbody. I initially planned to bob the bed myself, but ended up taking the shortcut of using the pre-bobbed Marlin bed. I also ordered the Marlin roll bar, rear bumper, grille, and headlight lenses. Though the paint options for hardbodies are pretty much limitless, I decided to stick with something familiar, and went with Tamiya spray paint from their AS series of paints because I liked the color selections and flat finish. I chose AS-19 Intermediate Blue, which I think is a color used in WWII by the US Navy. I shot several coats, and wet sanded in between them, getting a pretty good finish. But that nice finish didn?t last long. 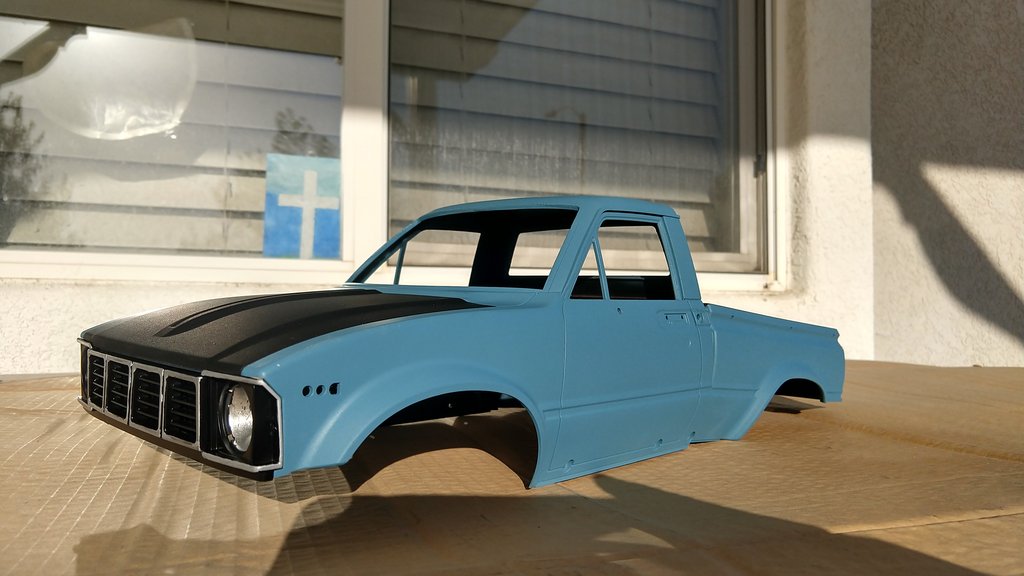 To initiate the weathering process, I first lightly scuffed the body with a kitchen scouring pad. This took what little shine there was to the AS-19 paint finish right off, but it wasn?t enough to get the look I was after. I then went at it with some wet 1000 grit sandpaper to wear through the paint down to the primer in a few spots. Unfortunately, I went a little overboard, and the results were not realistic at all. The wear spots I created were too large and uniform in shape. They looked pretty fake. I considered sanding the whole body down and repainting it, but then came up with another idea. I thought, why not just paint over the overdone wear spots? But instead of respraying with the AS-19, I grabbed a bottle of Pro-Line airbrush paint in Slate Blue I had laying around that my buddy had used to spray a couple of other lexan RC bodies for me. The Pro-Line Slate Blue was pretty close to Tamiya AS-19, it just needed a few drops of white acrylic paint to lighten it up, and it was a really close match. Then I just brushed the mixture over the spots that needed to be covered up a little more. The results, after allowing some time to dry, were exactly what I wanted ? it left the body looking heavily oxidized and chalky. I had achieved a pretty good approximation of desert patina. But I wanted to add a little rust as well. This I did by hand with Tamiya acrylic X/XF paints ? with a toothpick. Then I made my own wash with khaki acrylic paint and brushed it on lightly to enhance the patina and give it a dusty/grimy look. I shot the whole body with TS-80 matt clear to seal in my work, and the final step was to touch up each of the rust spots with a little of the Tamiya Weathering Master brush-on pigments. I feel I went a little overboard on the rust spots, but overall, it still looks good to me ? especially for a first try. Next time, I will try to restrain myself a bit more. 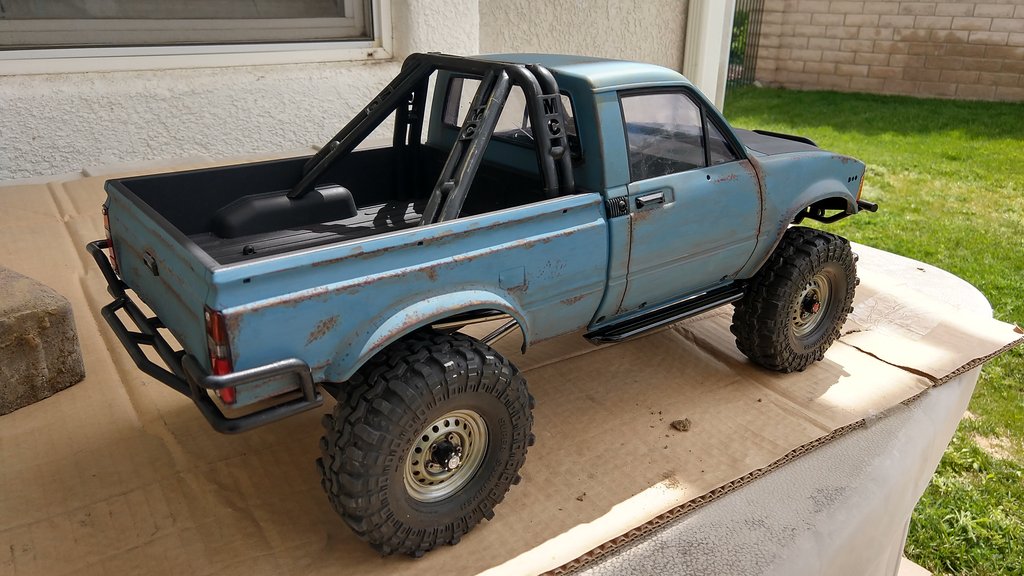 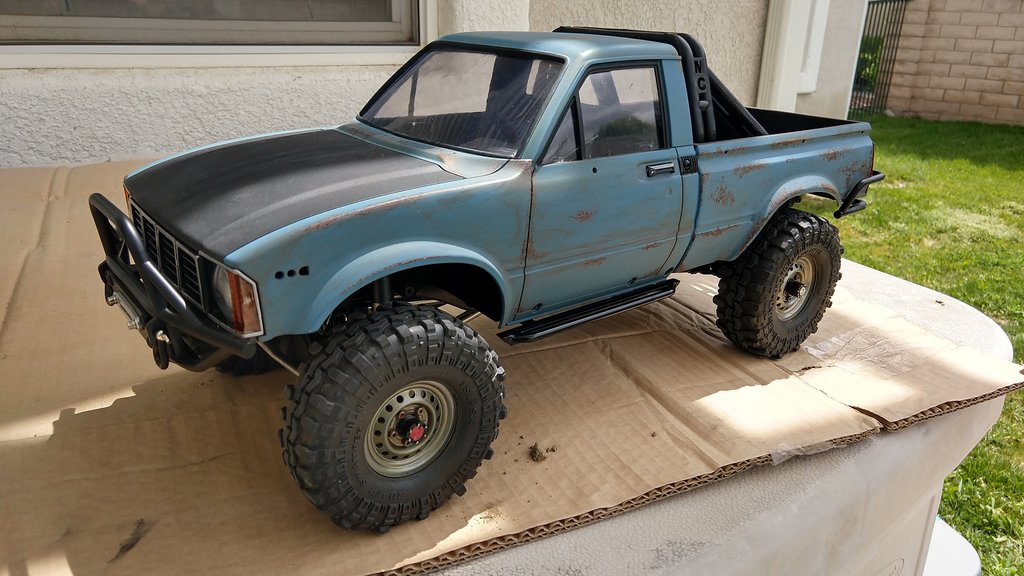 To finish this rig off, I bolted on some custom metal sliders that my buddy at Mt. Goat RC had made for me. They were intended for use on a short-wheelbase rig, so they?re not quite long enough, but they look fine and will protect the body. Initially, I had intended to use the traditional metal Marlin front bumper with a Warn winch, but then I wanted to do something different. I threw on this GMade GS01 tube bumper and it just looked right to me. Aside from adding a light kit, a few scale accessories, and possibly an interior, I?m pretty much done with this build. 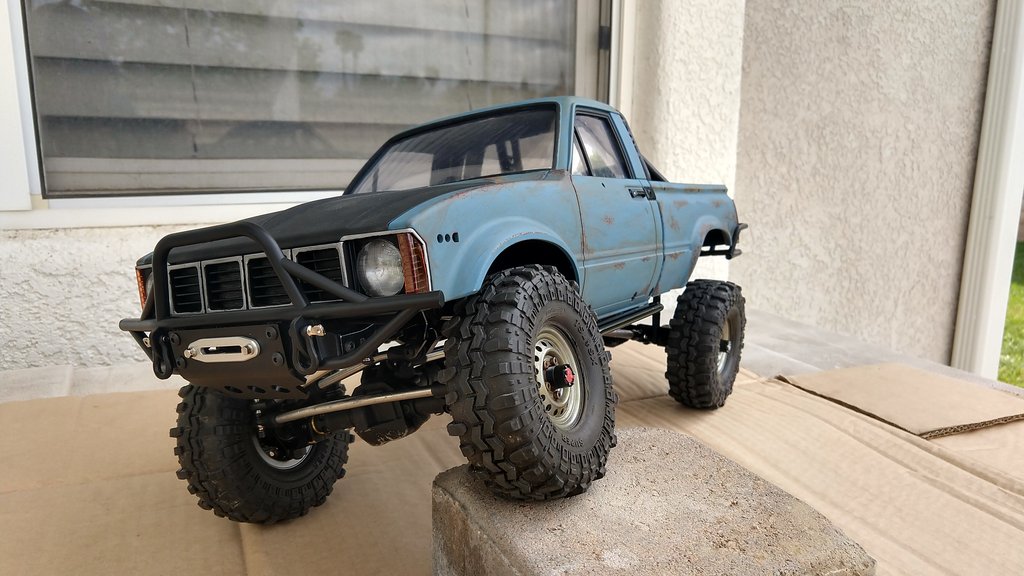 I took it to our local crawling spot yesterday, and it performed well. Initially, I drove it like a rolling dollhouse. I?m not usually shy about wheeling my RC?s hard, but this is my first hardbody, so I was just trying not to destroy it right away. Eventually, I did get used o it, and started to take on some tougher obstacles. There were a bunch of TF2?s out on the rocks today, and my linked Yota fit right in with them. We had a blast. 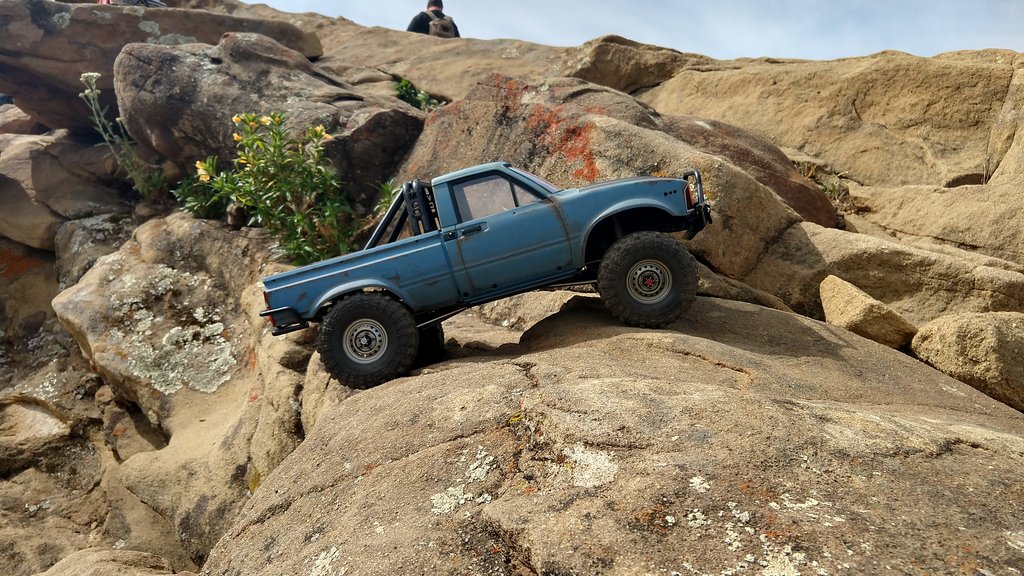 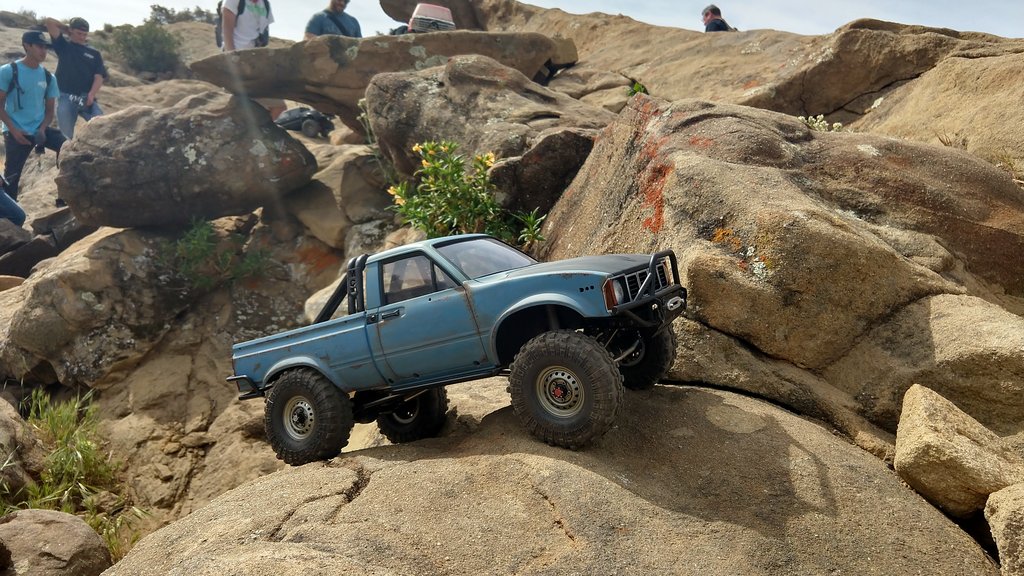 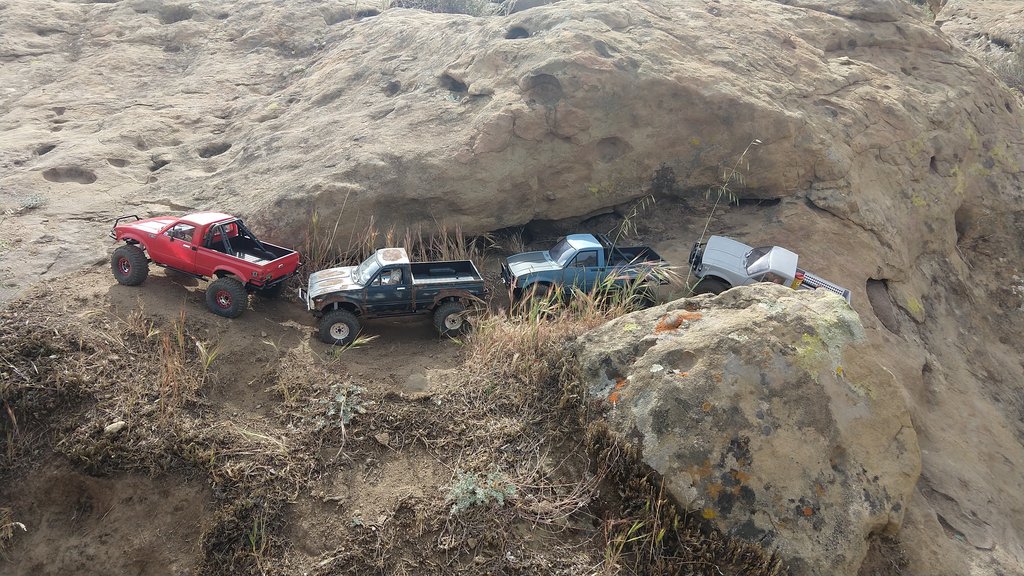 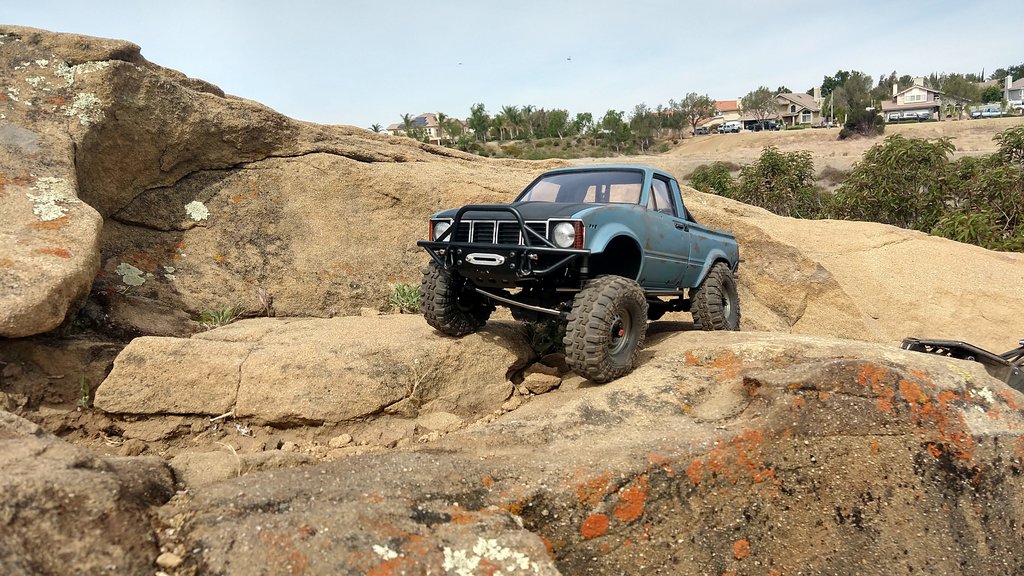 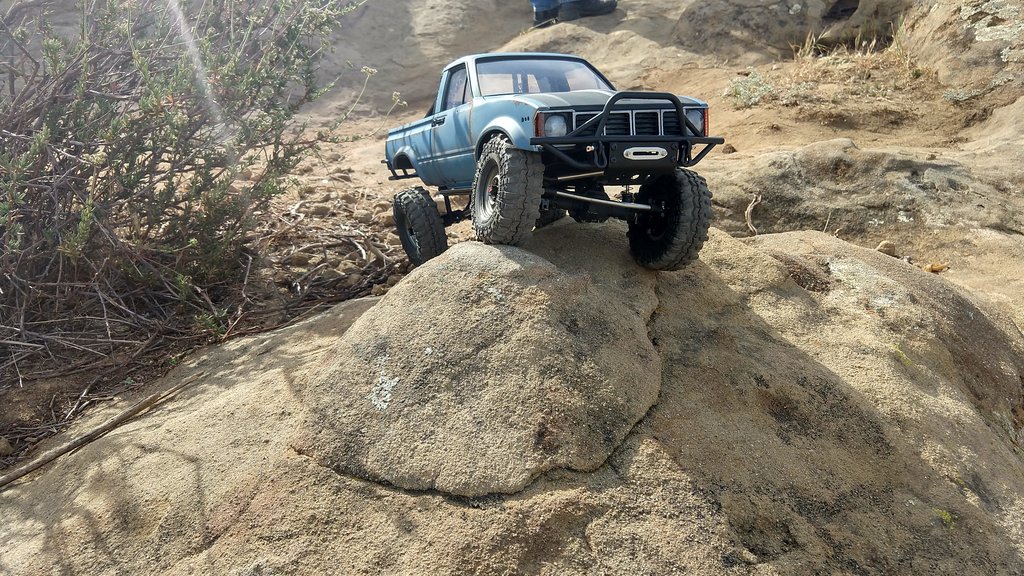 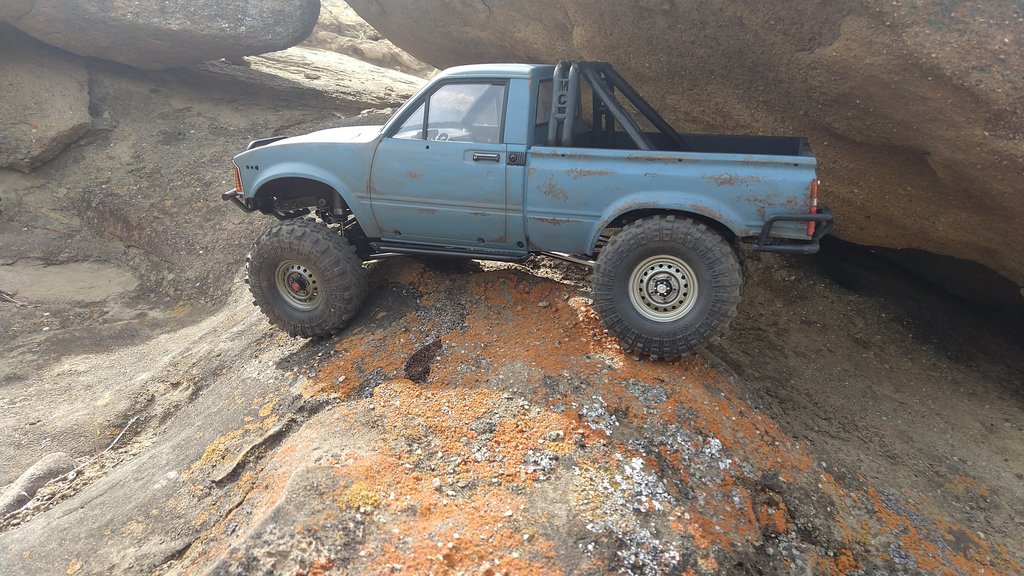 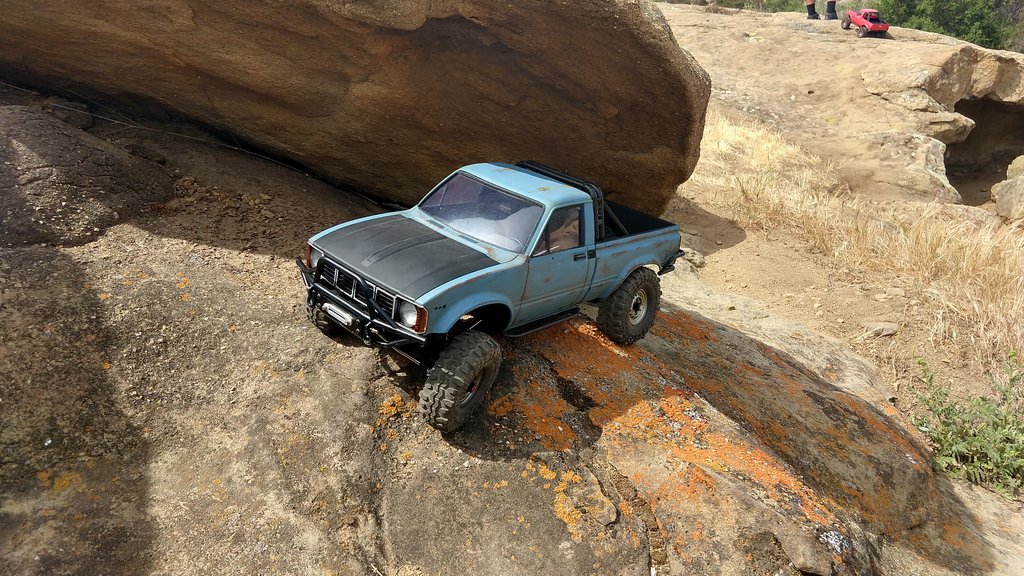 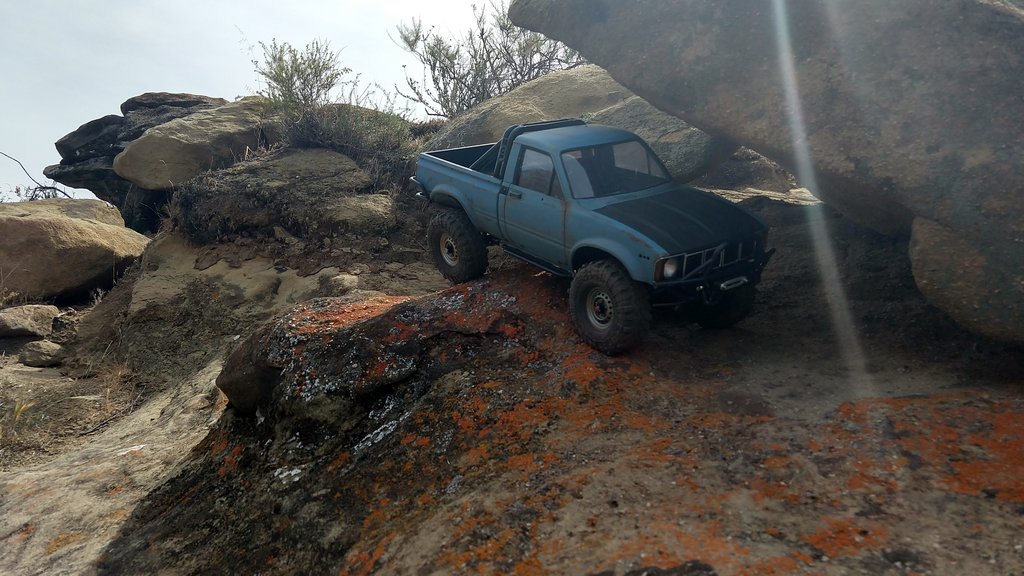 A dirty beater - just my kind of truck - I love it!

The paint came out really well!

Thank you all for the kind words. I've got another Yota in the works that may also get the desert patina treatment.
D

Very nicely done, just the right amount of weathering without going overboard. Also the tire and wheel package fits very well, normally I'm drawn to the smaller tire look but the TSL SX 1.9's look great and with those wheels blend in nicely.