Timmahh said:
Out Frickin' Standing work.
Looks Great. Love to see vid of it running when you have it done.
Click to expand...

Thanks very much. I still have a long way to go before paint. I hope to have it all primered by sometime next month. Awaiting a few small details to put in the engine bay and have to remove all the body parts and paint the structure that the body parts attach to. Lots of things to smooth out on the body pieces as well, but Lord willing, I hope to finish that part of it by Christmas. I started piecing together the driver yesterday - basically arms and shoulders and a head. I have to make my own because I'm about 1/9 scale more or less.

Tail lights are a bit of a challenge for this. I have nothing ready made and my access to a hobby shop is limited as the local one closed and the nearest on the list is 75 miles away, the next one 96 mlles away and no time for a road trip. I found some expired over the counter tablets at home that had a pill bubble just the right size. So I tried to think of ways to tint them. I tried coloring them in with markers and filling with a clear glue. The red was okay but the orange was not dark enough. So I decided to see if I could color the clear glue with food coloring. It is Duco cement and it took the color but clotted up a bit. Final trial was using clear 5 minute epoxy. It took the color and stayed the same consistency so the next challenge was to get it in the pill bubble. We had some empty syringes from dog medication and I loaded one up with the orange and one up with the red. Filled the bubbles with no trouble and let them harden. The trim bezels were the next challenge. I went with a technique I used previously. Hammered some solder wire flat and straightened it. Then cut to the proper length and wrapped it around a tube of the same size and made sure it was as round as possible. Before shaping it I sanded it with very fine sandpaper to shine it up and get rid of any hammer marks. What you see is what I got. They let light through pretty well. The red lenses are perhaps too dark so I'll have to search for similar size pill bubbles and make another pair, but it will be easier this next time. 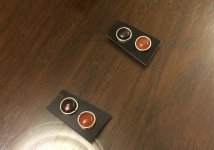 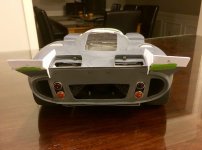 Never cease's to amaze me how cleaver you are with these builds!!! So cool!!! Great use of "use what ya got"!!!

Scaled, but not fishy.

How's that old saying go.... "Necessity is the mother of invention".......
I have been really enjoying following your progress on this build and look forward to seeing more.

My favorite build so far. Stunning and beautiful as well.

Thanks! I need the encouragement! This thing still needs lots of work. Mocked up a rear view mirror and the intake stacks and coolant overflow tank (at least that's what I think it is), and started mocking up the driver. Because of the battery placement my driver has to be on the left side which is a compromise since the other bodies I've built are left hand drive too. 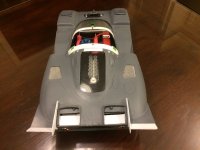 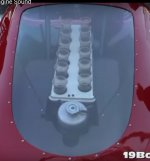 Not sure as to why the intake trumpets are clear on some cars of this period. I remember seeing for the first time watching the movie, Lemans w Steve McQueen. I don't think it is to see out the back because there is so little visibility to begin with. I am guessing it is actually a safety thing as in if there is a fire in the engine compartment they will see that more easily. Anybody have any ideas?

Driver and mirror - a work in progress. 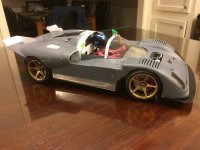 Primered more parts and made a cover for over the front suspension out of a plastic eye glasses case. I'll probably make another one now that I see some adjustments to make with it. I'm working on making the exhaust pipes and the transmission back plate but I have more to think through on that. 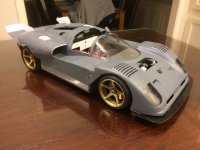 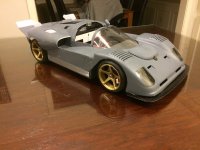 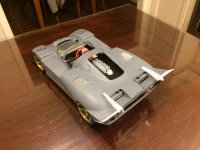 The back end of this car presents some challenges since it is open and my particular chassis doesn't afford much room back there either. On the real car the exhaust pipes drape neatly over the rear suspension on either side of the transmission and the pipes closest to the transmission actually end so as to almost not be seen at all. The only pipes visible are the headers from the back half of the engine and they end just even with the body work. That was not going to be easy to do and I decided I liked having 2 and 2 coming out each side so I deviated. Because of the cramped space making tubed pipes turned out too difficult because I have to make a right angle bend in a small space so the tubes either split or crimped - that despite using annealed brass with sand inside so I went with automotive vacuum hose with a piece of aluminum wire inside. The aluminum wire is for wire ties on chain link fencing and runs about $5.50 a pack. Plenty left over, but way cheaper than trying to buy that wire from an industrial supply place which only sells it in big spools. 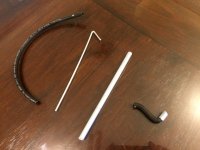 The transmission cap was made from varied thickness styrene and is a grand approximation. The pipes were painted and fixed to a piece of square tubing and were attached to an L shaped piece of clear plastic along with the transmission end cap so it looks like it's floating similar to the real car. 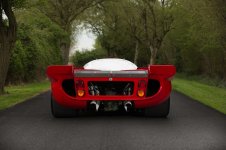 My render is not so elegant as the real thing - but hey it is what it is. Fun and not too complicated. 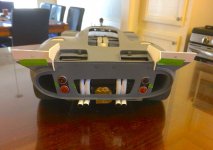 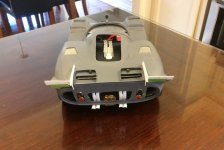 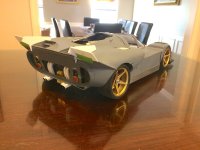 Glad to see more work on this masterpiece!

The Barbie Vette is on hold for a bit. I decided to push to finish this one instead.

I'm exercising a fair amount of freedom with this build because I don't have all the skills necessary to fabricate an exact scale replica, and this particular Ferrari had a number of variations just with the S version (short tail) alone not to mention the Coda Lunga (long tail) version. In addition to that my chassis is not purpose built for this car, but rather is used for several different styles of body shells so accommodations have to be made. I've been off of this for a few months as I started chasing another build and got side tracked and then my school year started and time to work on this is more limited so I decided to push to finish this one and leave the other which is much earlier on in the process.

I wanted to cover the suspension that shows under the front clamshell and took a plastic eyeglass case and formed a cover. I had done a smaller one but was not happy with it so I went to work on a better version. I also made holes in the clamshell for the fuel caps which will be painted silver. Those are screw caps from the hardware store. Then I went to work on fender mounted rear view mirrors which appear on some versions of the 512S as well as the mirror at the top of the wind screen. The one on top is made from some flattened aluminum tubing and a marker cap. The fender mounted mirrors are made from flattened tubing,a 2 nub Lego and a USB cable cap. There is also a 3 mm threaded rod going from the fender up into the mirror housing. I also made new aluminum pieces for the tub sides because the previous ones were not exactly fitting right. I am nearing the end of fabricating body hardware and will work on a limited interior, the driver, and then hopefully finish work to get the body ready for painting. 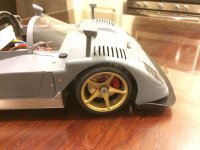 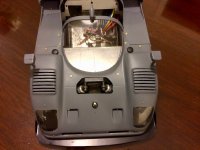 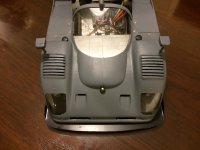 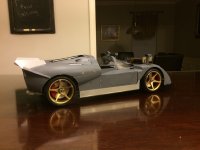 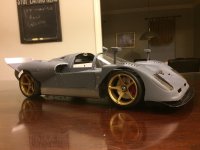 As always I like the way you repurpose stuff!

I went to work on making a driver for this. The challenges in this is that I'm in between scales. It's not fully 1/8 and not 1/10 - more like 1/9 so its' "Good luck finding stuff in that scale." When I was doing my Jag project I came a cross these Nascar mini helmets called Bobble Dobble and they were a really good size. I found some on ebay and bought a lot sale of 3 helmets and a standup figure.

The starting point. A Bobble Dobble. 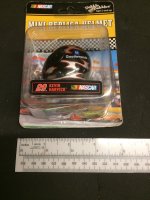 I coupled that with some foam wrapped wire core curlers my daughter had from doing her hair for high school theatre productions. The hands were made from aluminum flashing so they could be molded to grip the steering wheel. Those were coated with sticky foam. Since the curlers are foam and would be painted, I used a latex primer on them and then acrylic craft paint. A chest had to be formed from the same aluminum sheet and foam tubing was used to create a neck for the driver. Then I coated the aluminum body with gaffers tape, a fabric tape that adheres well but can be removed and replaced without destroying the chest if I don't set it right. In addition, I needed seat belts so I used the plastic coated wire closer ties from bagged coffee. They form easily and take paint pretty well.

Below is the driver I made for my Jag and he's got more body to him since he sits higher over the electronics. I named him Guillermo Del Torso as a spoof on the filmaker's name (Guillermo Del Toro). 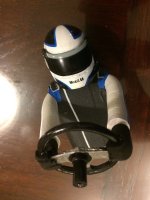 So here is the blow by blow photos of his counterpart. The challenge being that there is really no room for a torso in the Ferrari build. I'm toying with the name Armand Shulterkopf (German: Shoulderhead) or Armando Spalla (Italian: shoulder)

The hands. Crude but gets the job done. 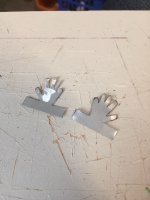 The rough figure without the body. 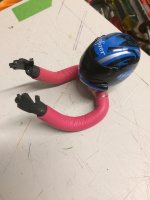 The assembly with the "seat" and more fully formed driver. 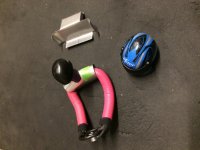 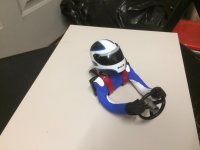 Installed and ready to race. 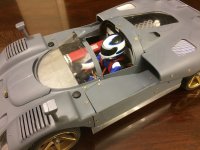