To start the thread on my build, as a young lad many many years ago, I was truly fascinated by the Lancia Rally 037 and ever since this car stopped competing in international rallying, I have been trying to imagine what a potential successor might look like. Few years ago, I decided to stop just dream and put pen to paper or rather open the CAD screen and start scheming. This styling study is the base for my models, starting at 1/100 scale, moving through 1/87, 1/43, 1/32 (slot car) and eventually arriving at 1/6 scale rc model, which is what this thread is about. In effect this is a scale build of a virtual car, though I hope I may one day be able to turn it into reality.

I started the build last winter, but was massively lacking the time to also start a build thread going at the same time, so this thread is an account of the activities over the past 12 months. Actually, although I started the project a year ago, I soon had to stop it, when in February/March we encountered the troubles with the virus, and amid financial worries, I did not restart the build till July.

What prompted me to start the rc project was a visit to last year?s Rally Legend in San Marino ? after coming back I said to myself, I had got to build a large scale rc model of the Rally 037 MkII and run it in the paddock there the following year. I am pleased to say we accomplished this, but I will keep the story to its chronological order.

The first decision was nitro or electric ? it took me less then a nanosecond to settle on nitro, ticking an old childhood dream box of mine, when my father got me a nitro engine, but I couldn?t do anything with it, lacking knowledge, skills, tools and equipment. At the same time, although electric powered models these days are so much easier to run and to be fair faster, they are not half as exciting as nitro models. I relished the challenge of going nitro (I have built several electric models in the past).

The thinking behind the scale choice was based on what the largest scale would be if I was to use commercially available tyres and transmission, but before having to take the jump to the 1/5 scale (and above) parts. In other words, base it on a 1/8 scale buggy/truggy components. The big factor here were the tyres ? after lots and lots of searching and doing the maths, I settled on ProLine?s Clay/Street tyres intended for 1/10 trucks/truggies, that enabled me to go for 1/6 scale. On the transmission front, luckily a 1/8 buggy turned out to be a good choice providing plenty of flexibility on wheelbase and track as the model was going to be rear wheel drive only and I needn?t worry about the relationship between the front axle to centre diff, while the track could be tweaked through my design of wheels. I also wanted to do my own suspension links, but ran out of time for these. Doing a bit more research, the Hobao Hyper looked like a great choice with lots of spares and vast user base and pool of knowledge here in the UK.

My intention was to 3D print the three-piece bodywork, the chassis and the wheels using a commercial service, Shapeways in my case, who actually did an outstanding job on it 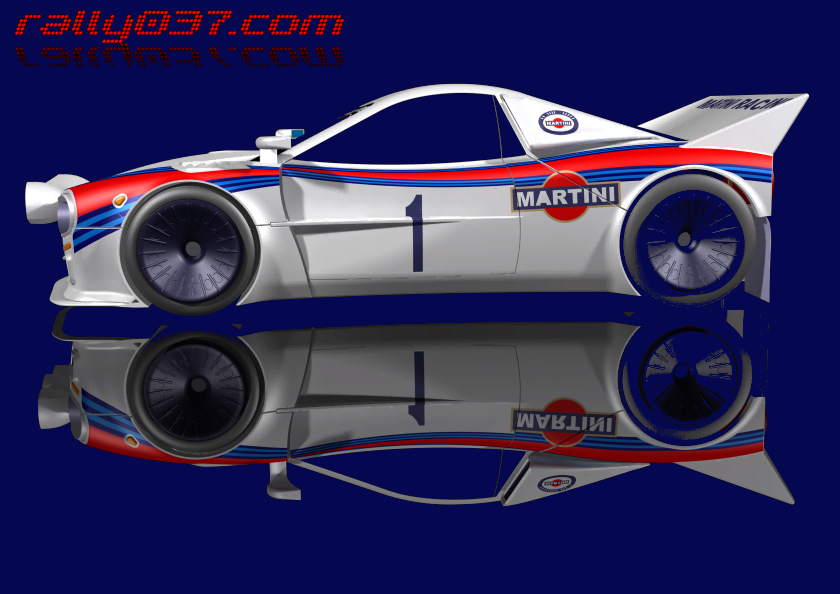 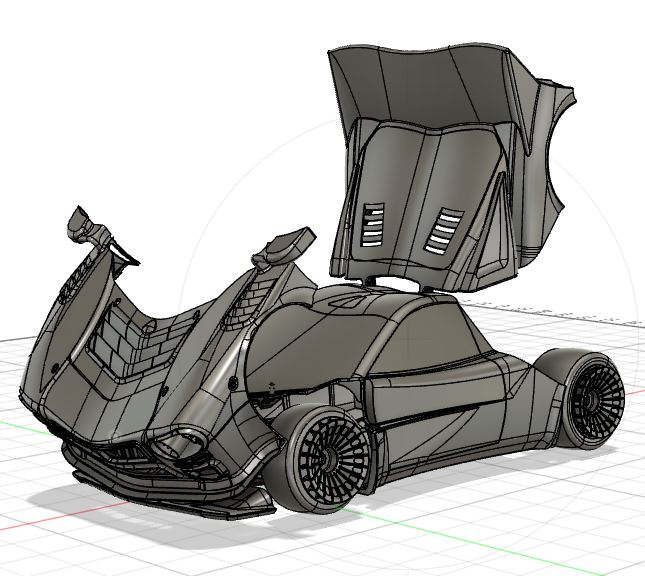 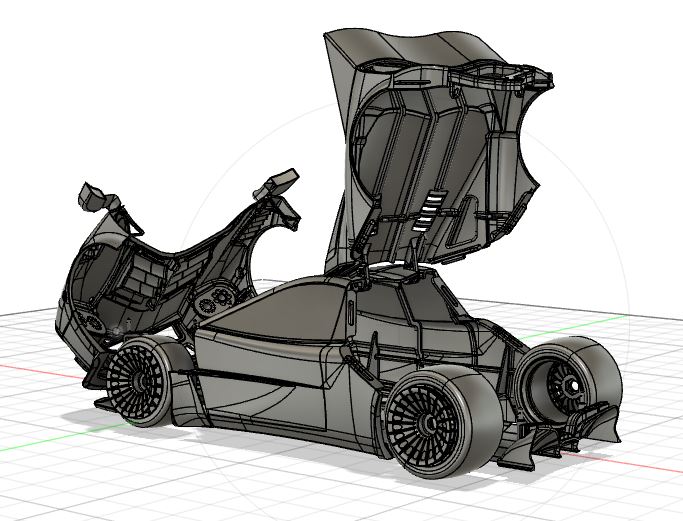 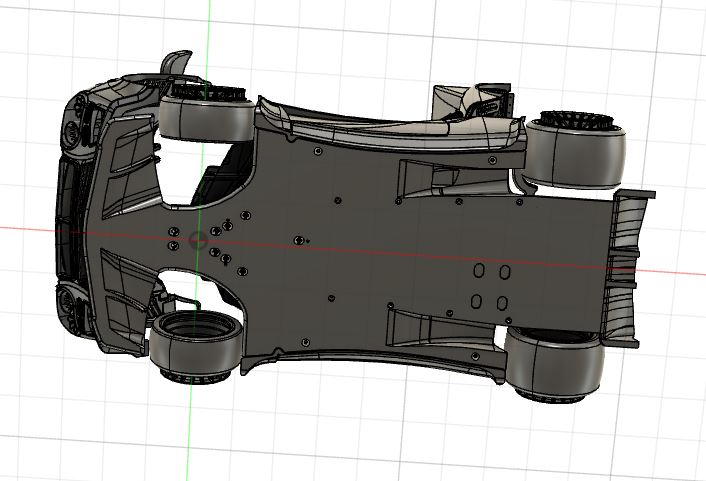 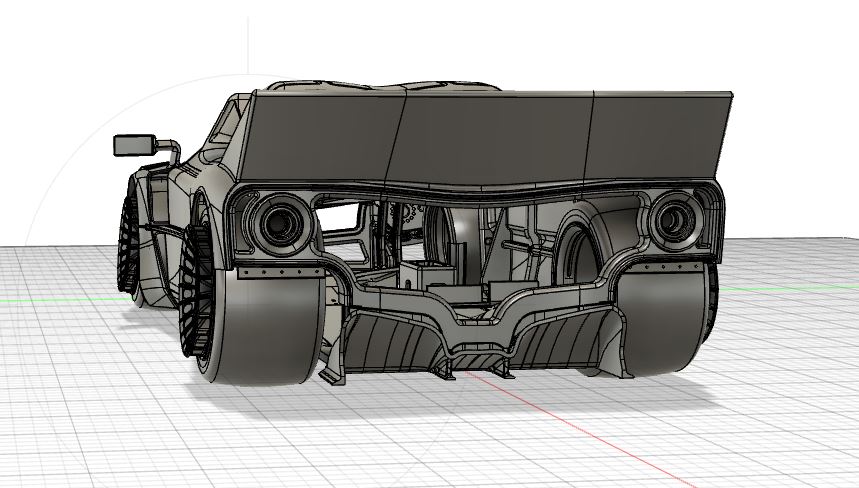 Thanks for reading,
Nik

Oh my. This is going to be an incredible thread to follow! Your 3D skills are amazing, is that somehow related to what you do for a living?
M

imthatguy said:
Oh my. This is going to be an incredible thread to follow! Your 3D skills are amazing, is that somehow related to what you do for a living?
Click to expand...

This is going to be good.

Epic start and a beautiful design!

That looks totally epic!! Now I read this and it sounds like you might already be preparing an update with actual parts printed, do you? Can't wait to see this taking shape, it looks so sleek! Loving those extreme brake vents on the wheels.

Cheers Guys, I am chuffed to bits by your reaction.

imthatguy and M J - you are spot on in your suggestion, I am a design engineer in my day job, generally designing mechanical bits, but still lots of surfacing involved, though ironically, there is very little complex surfacing in the design of this car, mostly intersections of various simple geometrical shapes, lots and lots of them.

Small Factory and Ghostpig - thank you guys, it is genuinely appreciated.

Frederik - thanks a bunch. You are also not far off, time is sparse but I really hope I can soon continue the story.

And just to add, you guys, have come up with absolutely stunning and superb builds that have been a real inspiration for me keeping me going in the challenging times of 2020.

Many thanks dagabba, I was just looking at your Volvo build, your projects are just excellent.

Few more images from me, though perhaps not as exciting as the first crop. 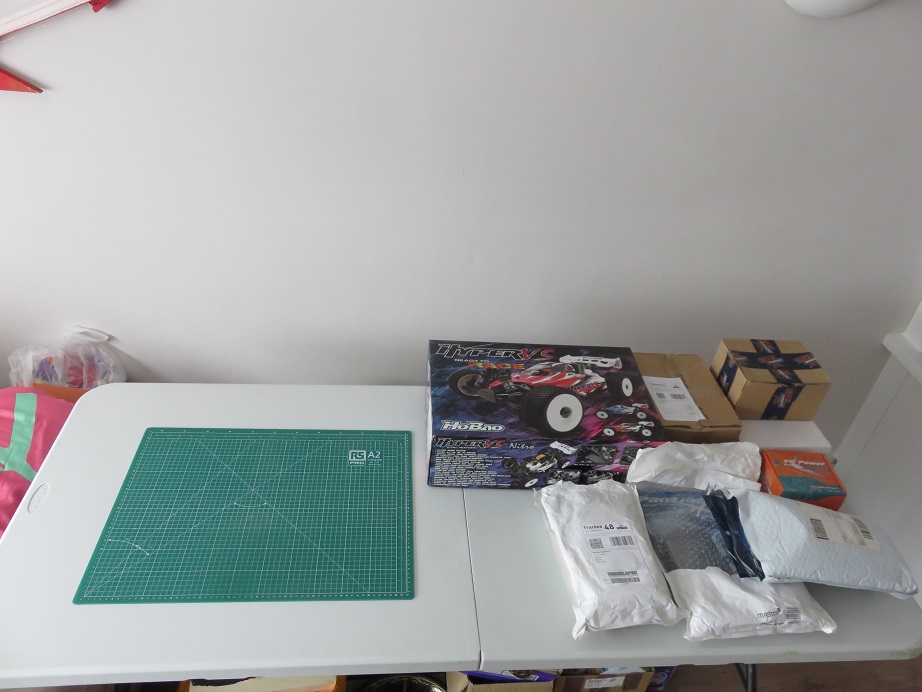 Buggy kit, tyres, engines, exhausts, all still in their boxes: 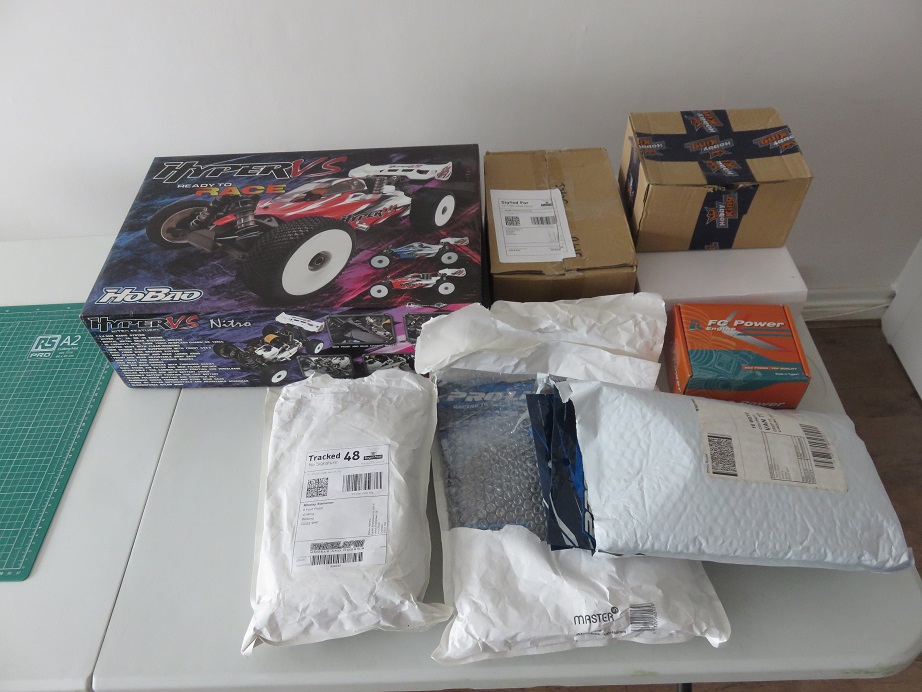 Few sets of tyres and also a set of short course truck wheels to see if I can use them, which was a resounding no:

Buggy chassis out of the box and lots and lots of measuring ahead to make sure I pick all the mounting hole positions correctly: 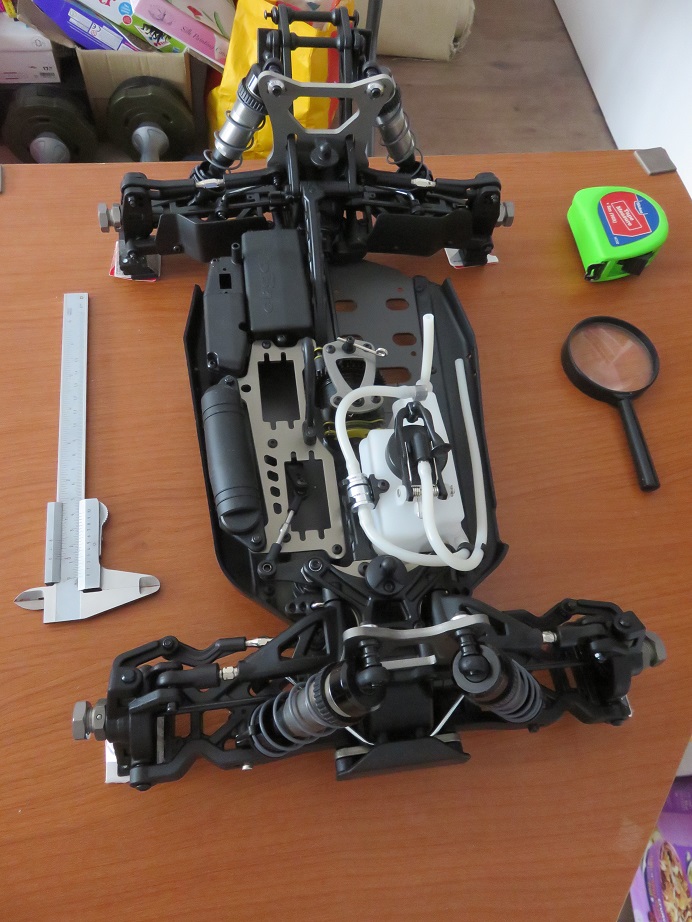 Significant level of improvisation while measuring was required :), which is where the domino blocks came handy. Primary engine is TrackStar SEG-H-28, while exhaust is from Jammin Products, JP-3: 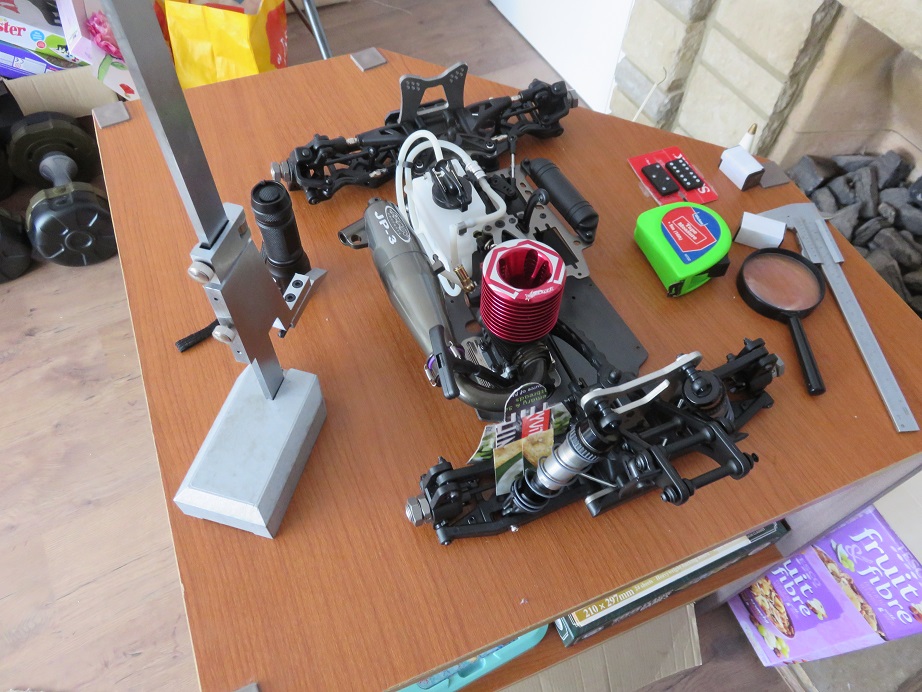 Workspace is getting more and more crowded: 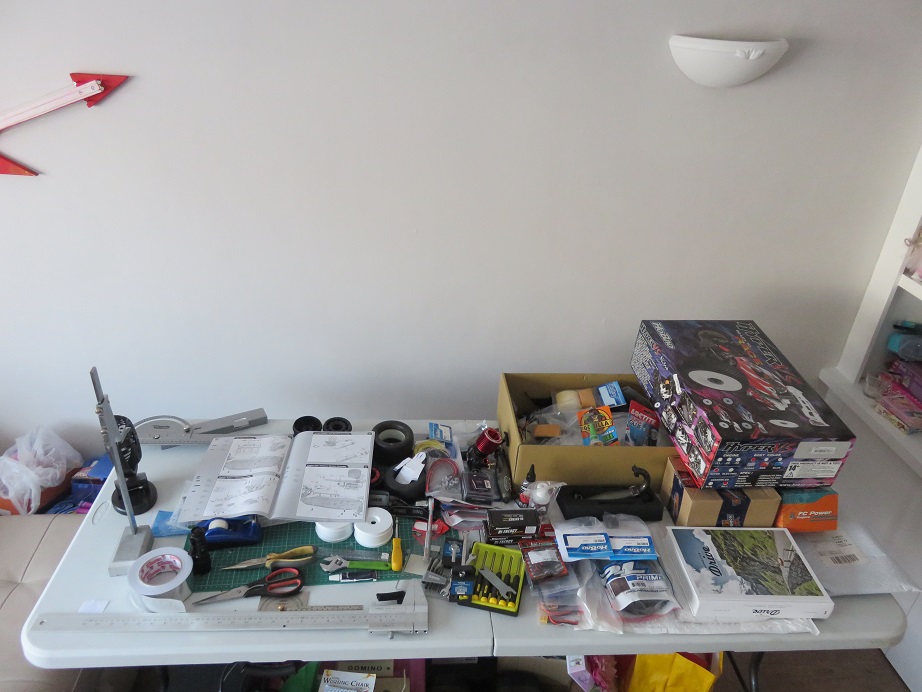 And more measuring. On the servos front, I went for Savox as the model is quite heavy and I thought I should splash on good ones. Spare engine is Hong Nor Force .32: 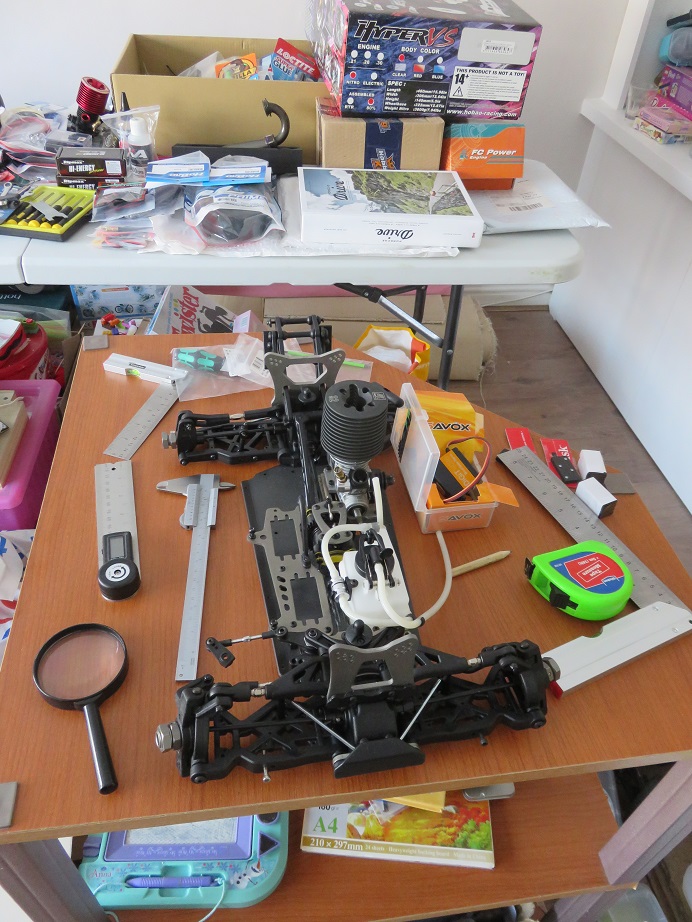 I decided to print my own damper stand as I wasn't sure that what I can find on-line at the time was going to be what I need. In hindsight, the design was a bit flowed for SLA printing as I didn't provide enough supports for the top plate, so it warped a bit, but nothing that would make it unusable: 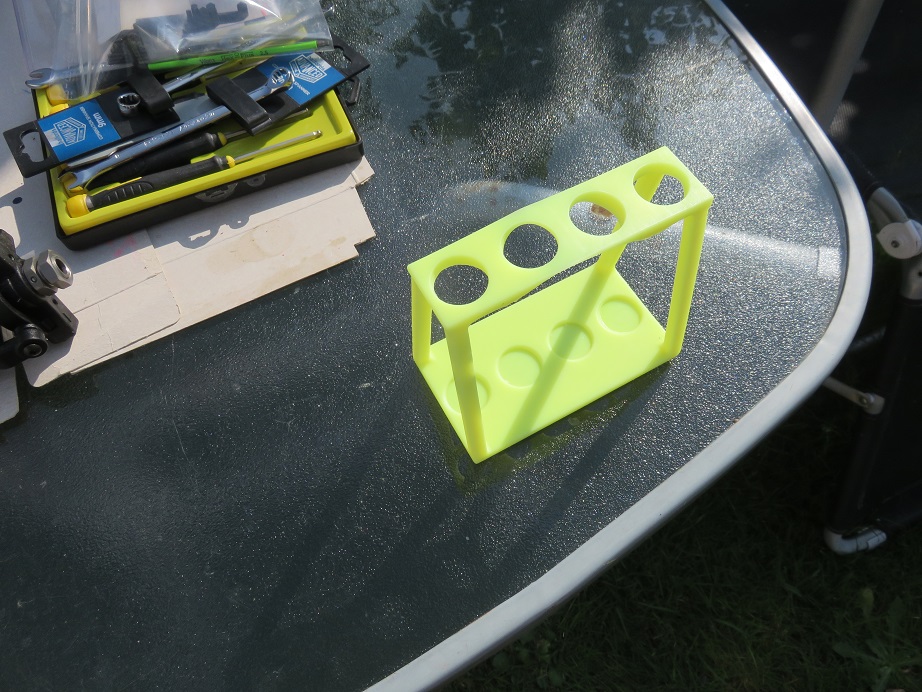 While the damper stand was post curing in the sun (printed using SLA resin), I opened up the centre differential and filled it with epoxy to make sure it is locked so I can use the chassis in rear wheel drive mode: 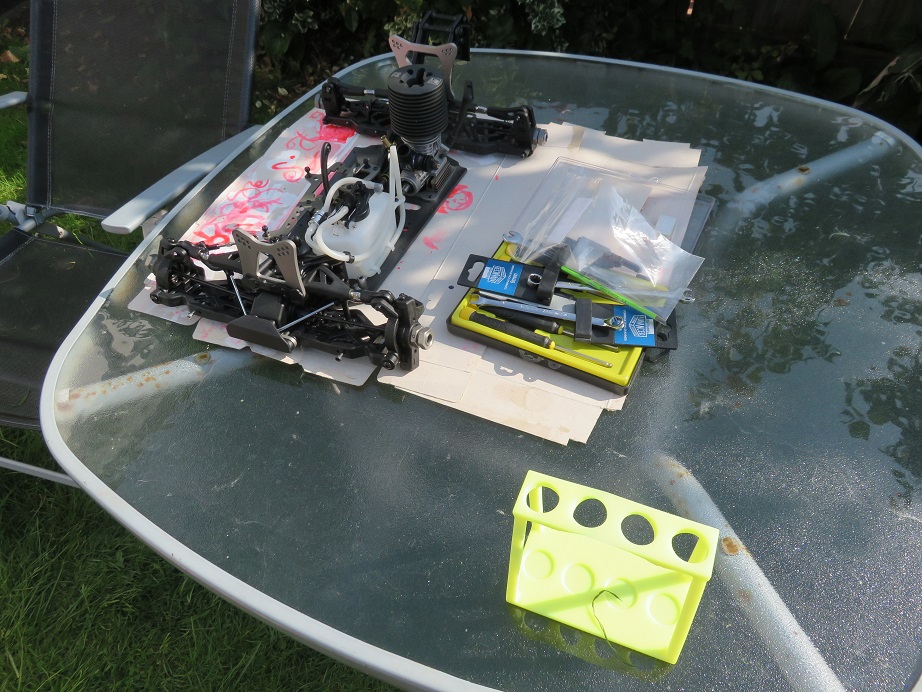 Thanks for checking,
Nik 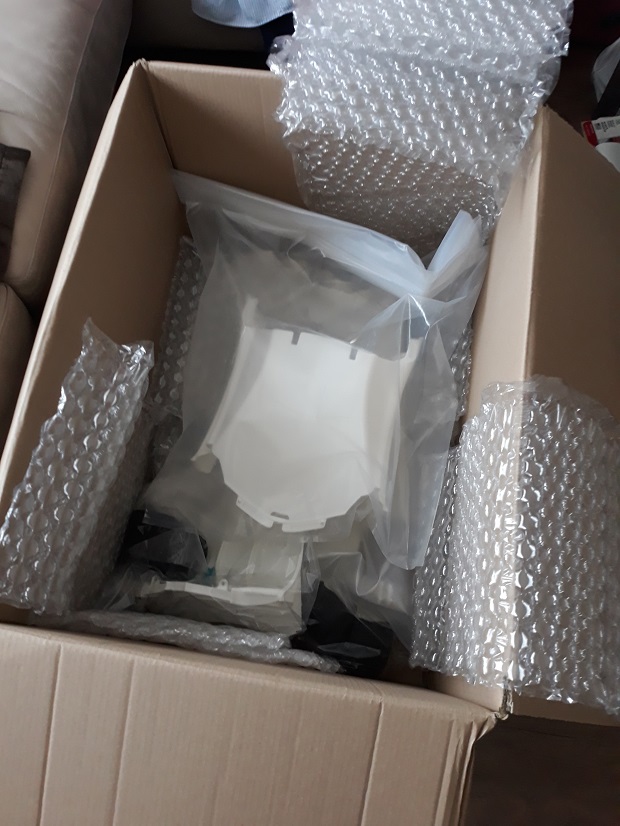 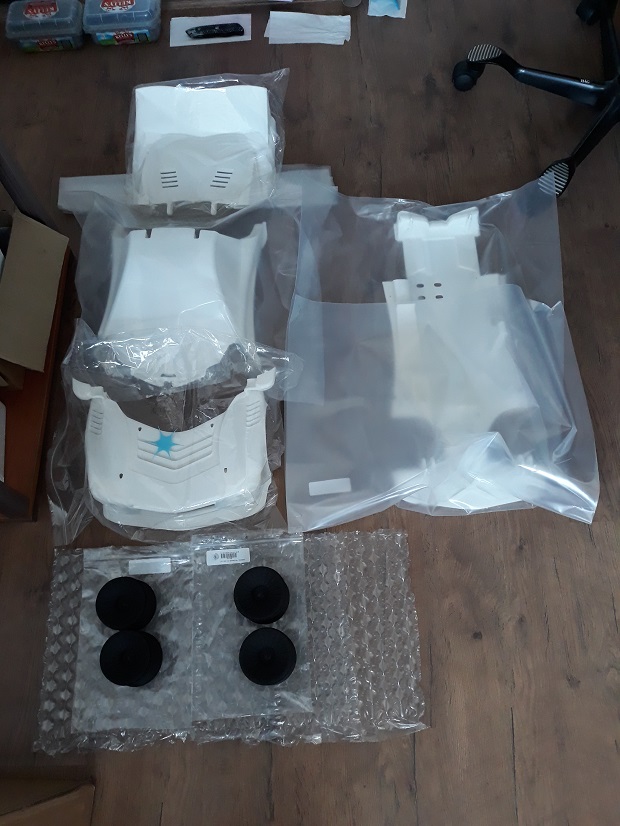 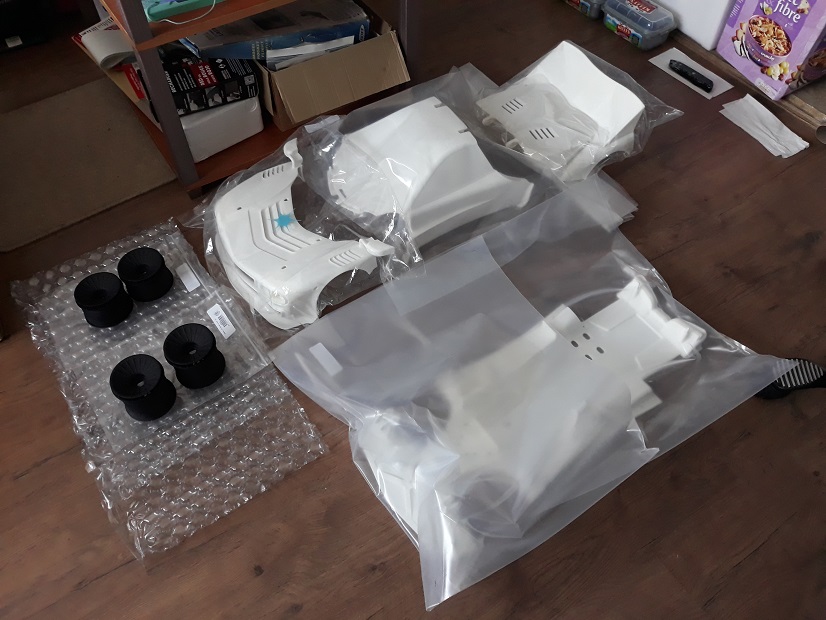 Few errors here and there on the chassis - when I was designing it, I new I was massively behind schedule, so decided to print it anyway, knowing full well the dremel will be out in action: 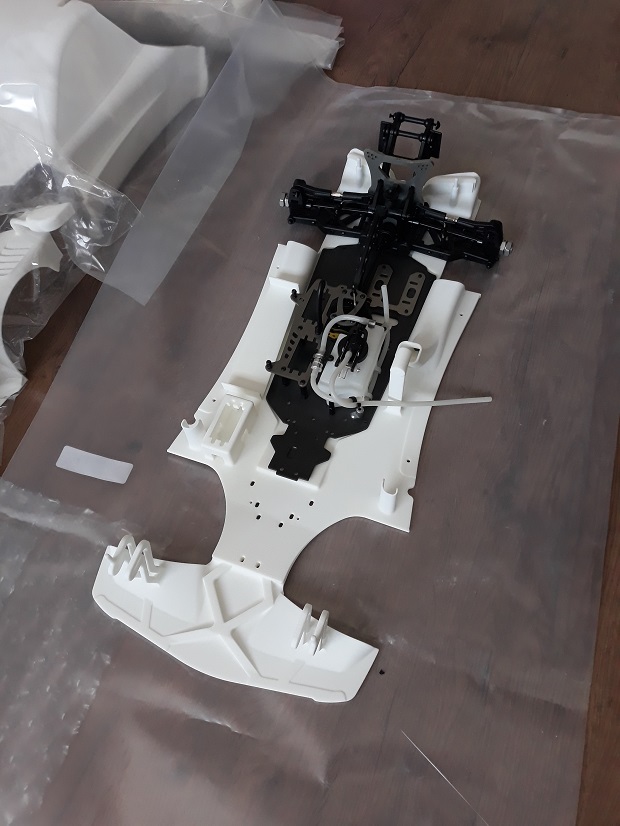 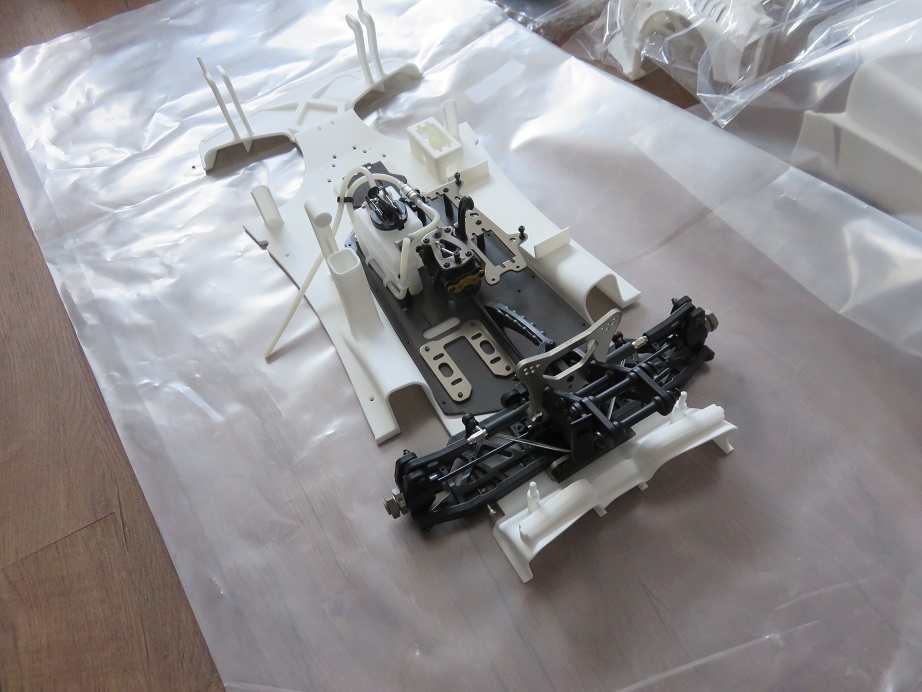 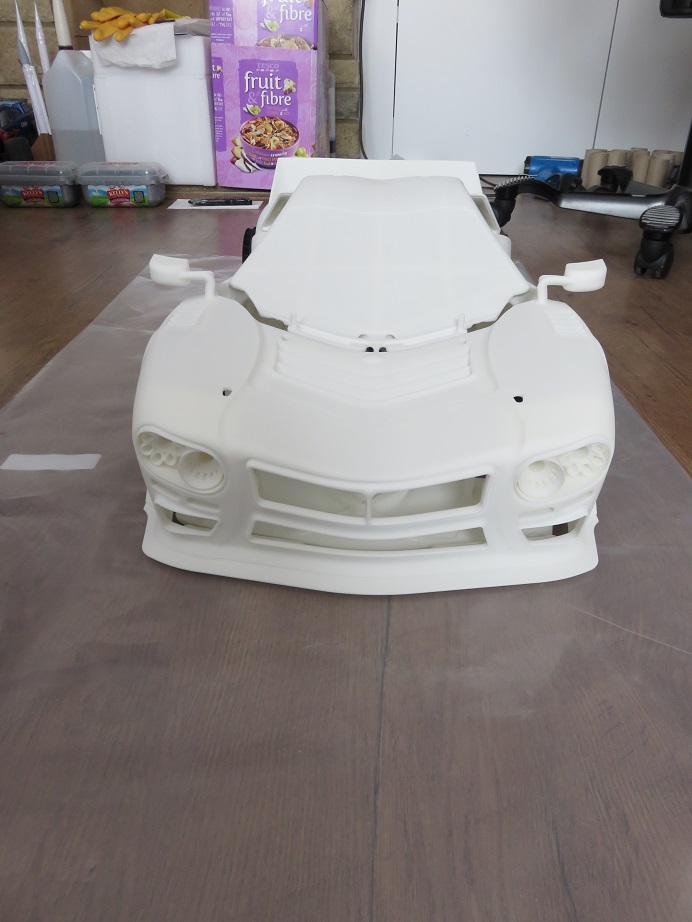 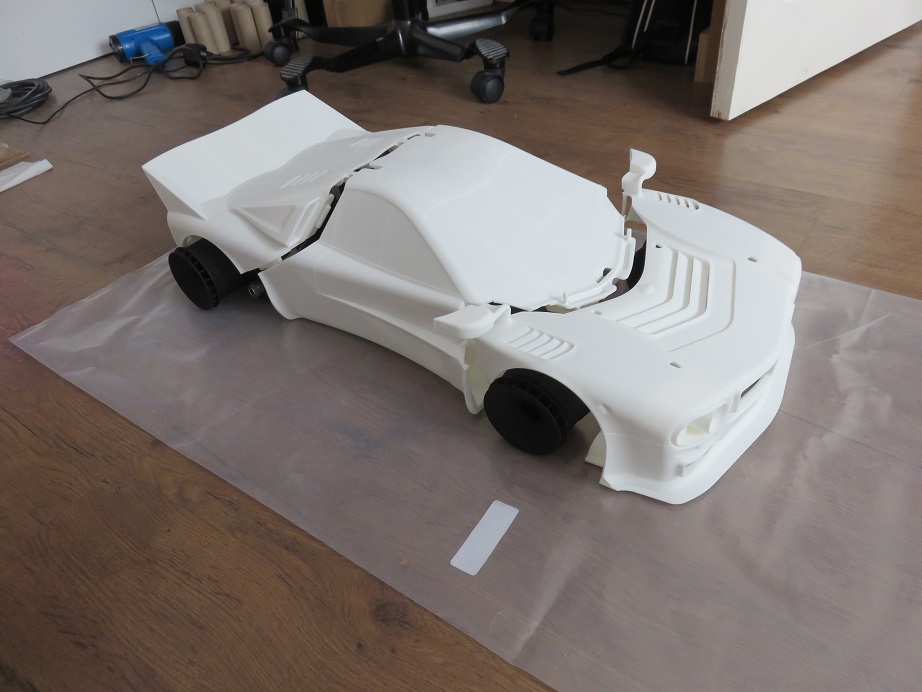 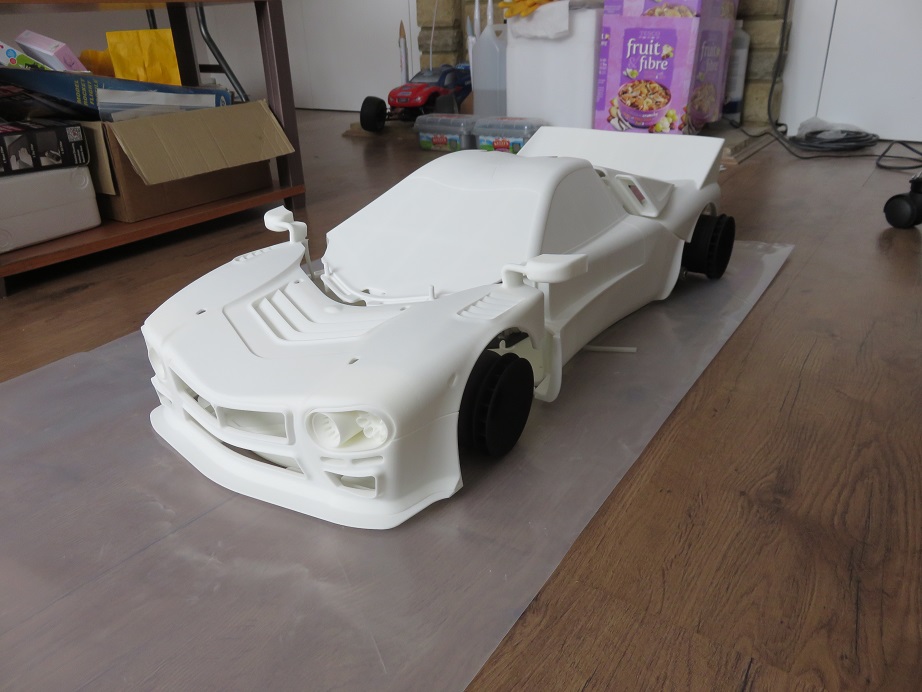 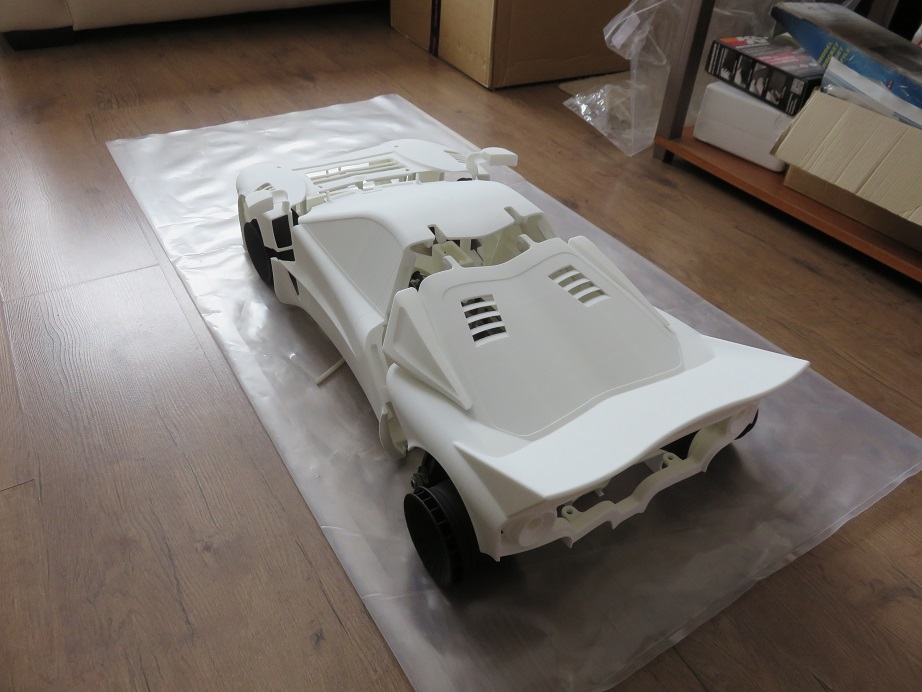 Thanks for checking,
Nik

FANTASTIC! Very impressive modelling. Was it always your intention to keep the windows opaque, or will that get the Dremel treatment?

I just woke up, saw this and I'am pretty sure that I am still dreaming.

Just WOW..... Did you get the body printed at shapeways?

Scaled, but not fishy.

A-plus for this Group-B, can't wait to see more..

Whoaaa! Must be like an early Christmas receiving this box! Those first mockups looks completely awesome. And it is cool to see what a regular 1:8 off road chassis look like when stretched to scale on-road proportions. I have a couple of Kyosho MP6 chassis and this is giving me some ideas lol!

Out standing!
Sexy beautiful lines on that body.
My eye's are very happy.

What an update! You surely go all in with this one.

Wow, this is sooo exciting!!

This gonna be a good one!

Cheers Guys, I am truly honoured by all your comments.

imthatguy - when I started the project, I intended to print all the windows in one single component in clear resin and include part of the interior together with a driver and a co-driver helmets, but as with the suspension links, I ran out of time to design this properly and settled for opaque windows printed as part of the main body and painted in different colour.

Wildstyle Customs - yes, Shapeways, I have been using them for many years on different models and so far their service has been outstanding.

Frederik - Christmas and a Birthday together, and you correctly point out placing the 1/8 buggy chassis onto the 1/6 Rally 037 gives a great idea about the difference in size between the two.