Yes, it's a Gaming PC built into the trailer of a Tamiya 14th scale Semi. What an interesting and bizarre project you say!

EVGA (a graphics card company) and Tamiya helped me put this together for fun. 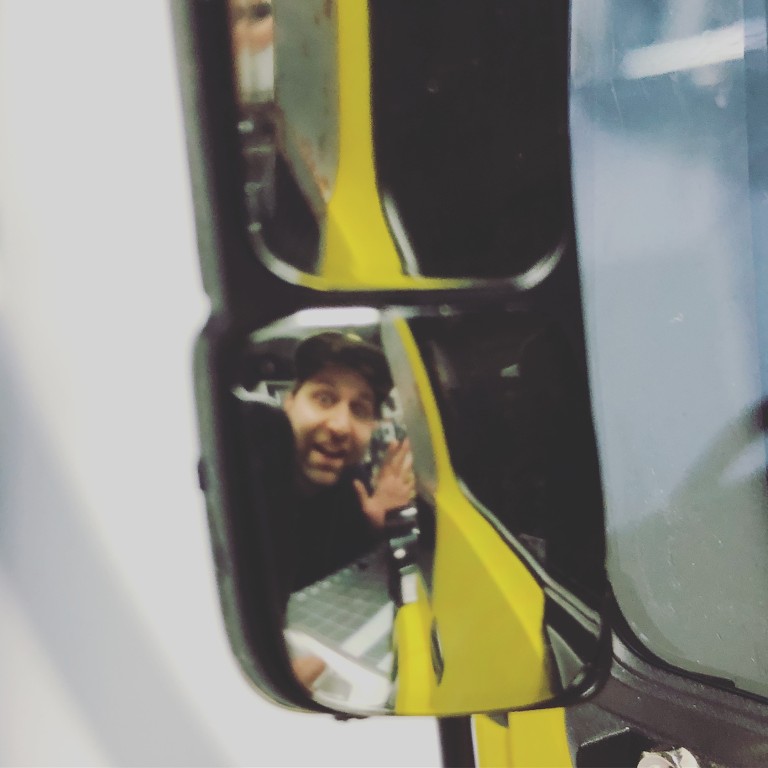 It all started with the construction of the actual rig. I started with the Tamiya Mercedes Benz Arocs 3633 Euro cab. An excellent, if not fiddly build. So many pieces go into these modern cabs that it was easily a week, maybe two of four hours a day to get it assembled to my standards. Instead of the JIS hardware, I had Team KNK make me a complete stainless hex hardware replacement kit. Really nice to have the updated hardware, makes for a cleaner look in my opinion. 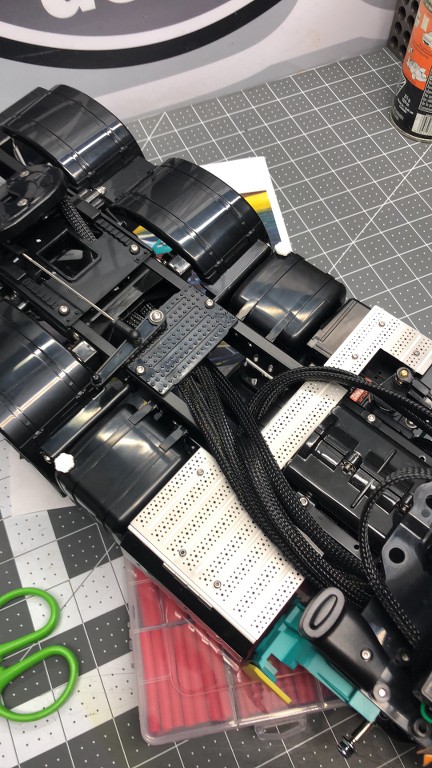 Since I'm putting PC components into the trailer, I decided to theme the rig around a game I'm enjoying right now called Cyberpunk 2077. Don't let the haters detract from this game, it's super fun. 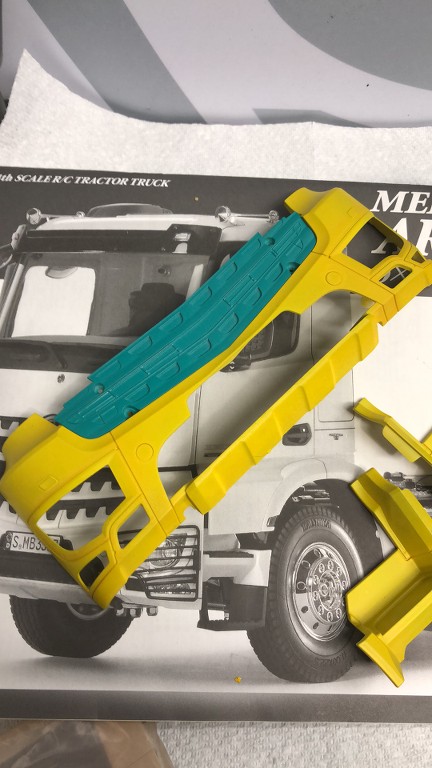 Since it's themed around a dystopian future-themed game, it needed some changes from the usual. Aside from paint color choices, I did some weathering. Including a panel that I chipped to look rusty and cruddy, I also did an oil-dot method of streaking that I think turned out really nice. 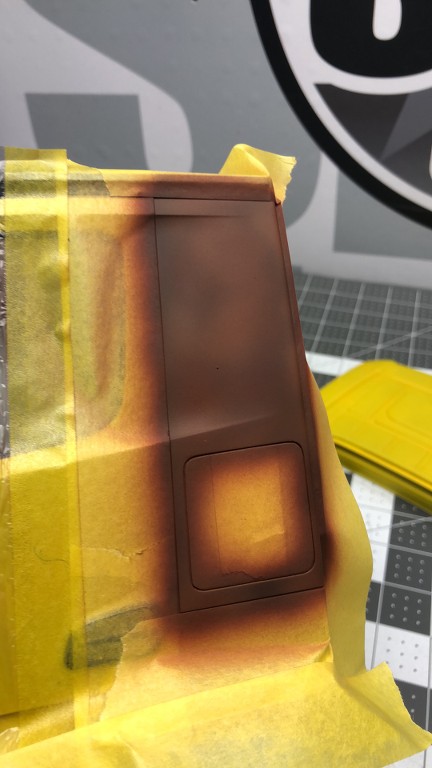 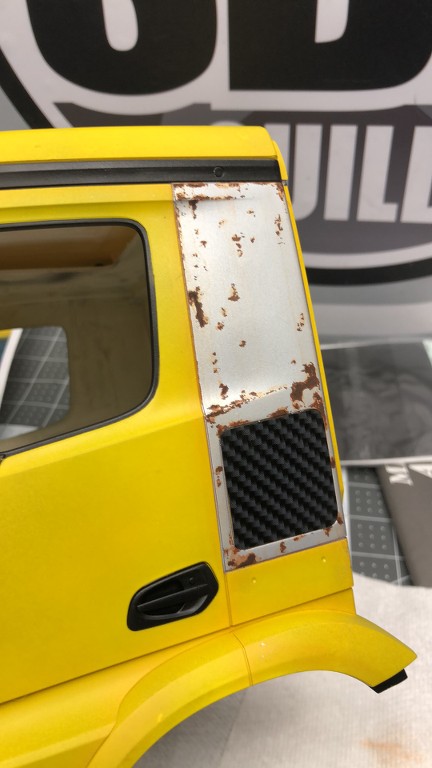 Here's the rest of the cab. I should add that this includes the Tamiya MFU-C for lights, sounds, and vibration. I'm really pleased with the outcome, such an awesome looking truck. 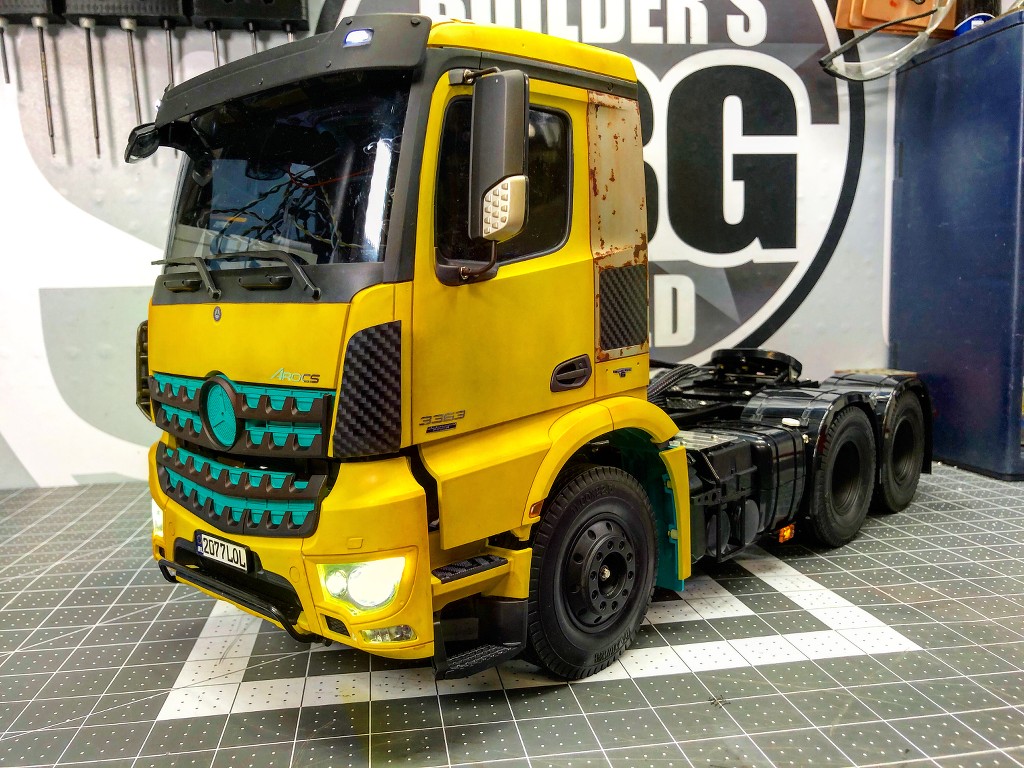 Light-up logo from CCHand. Really adds to the theme. 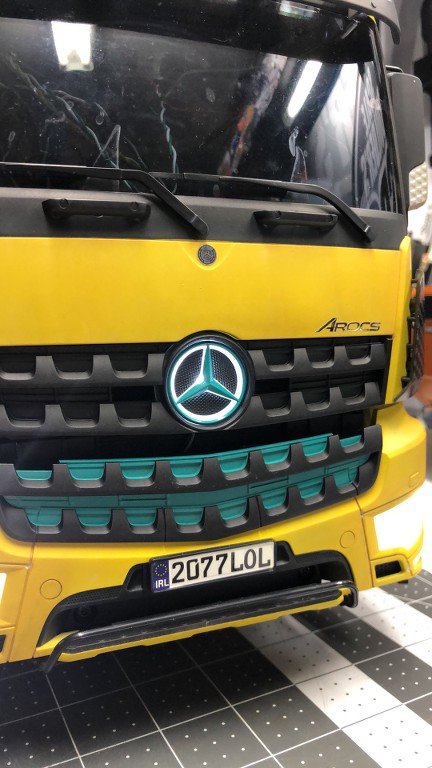 I have been following this build on Youtube and the live streams and it is very impressive. Looking forward to seeing it in action.

Tell Josh to get his finger out, need to see these machines up and running [emoji1787]

Cab looks wonderful! Dystopian future suits it so well, looks like an amazing model too!

Antipodean said:
I have been following this build on Youtube and the live streams and it is very impressive. Looking forward to seeing it in action.
Click to expand...

Thanks for watching! It's definitely a unique build.


UpsidedownRC said:
Tell Josh to get his finger out, need to see these machines up and running [emoji1787]

He's so "busy" with livestreaming all the time...

dagabba said:
Cab looks wonderful! Dystopian future suits it so well, looks like an amazing model too!
Click to expand...

Thanks, wait until you see what else I've done! 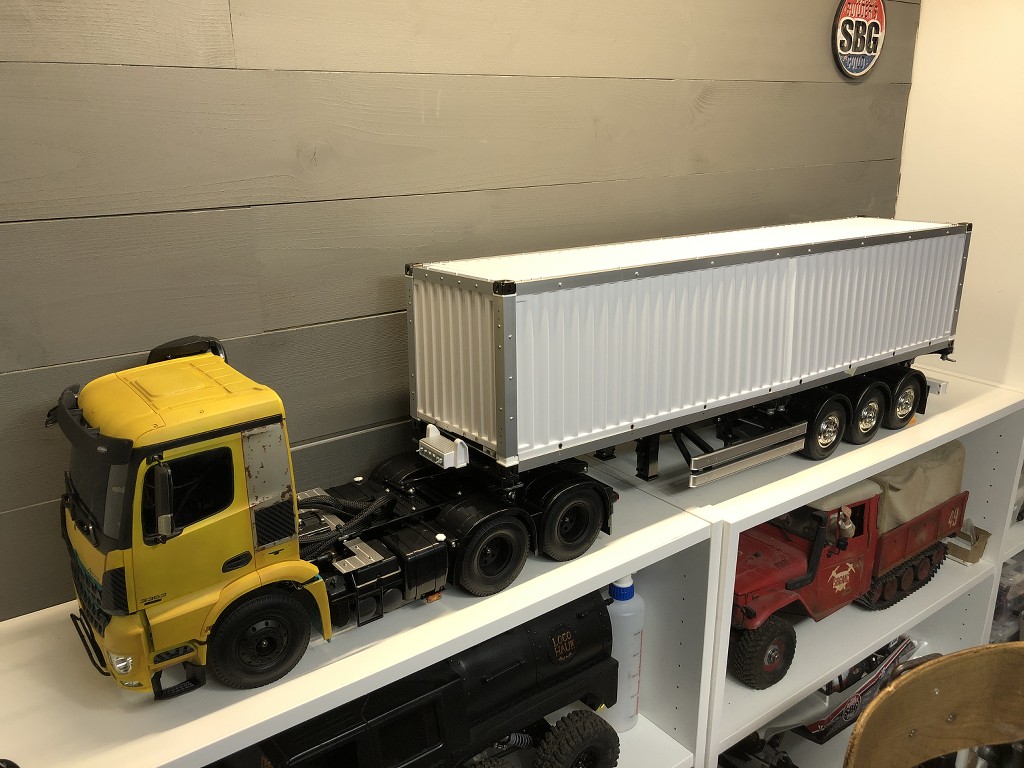 Let's build a trailer. Tamiya gave us tons of options for trailers, but I was the only smart one in the room and wisely chose the container trailer. That's smart for a couple reasons. One, the build volume inside is pretty great, and making room for all the PC components was going to be a challenge. We decided from the outset that we wanted to make sure they looked like RC trucks from any angle, so hiding the PC was paramount to the challenge. The only thing I wanted to see coming out of the trailer would be the power cable. Two, the container itself is easily detachable from the trailer, meaning I could actually USE this PC separate from the semi and trailer. Josh is locked into his always being on a trailer, so he has decided on a differing approach - which requires a lot more engineer level designing. But he likes that sort of thing.

Anyway, construction of the trailer was really involved. It was essentially like an IKEA flat-pack design and had a billion screws. Not a fun build by any stretch. But so worth it in the end.

Once it was built, I disassembled the top from the floor so I could mock up the PC build. 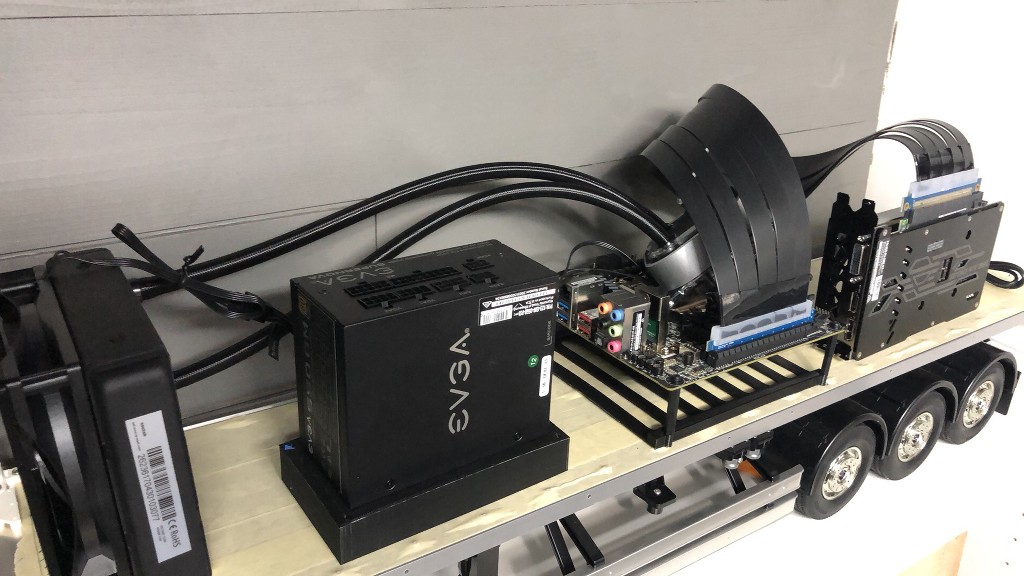 And a few other bits and bobs to round out the build. Fans, Riser cables to make sure everything works in a more horizontal than usual layout.

I printed a lot of elements to make my own mounts. The mobo, GPU, PSU and AIO all got custom mounts once I had decided on placement. 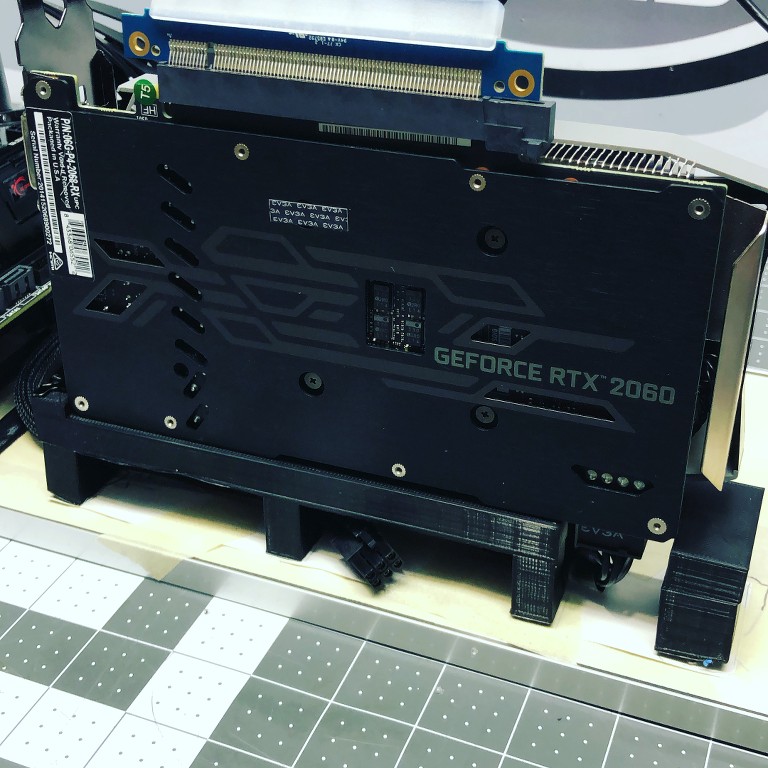 The entire lower floor is aluminum plate to help aid in rigidity. I had to cut some major holes as I was going to be exhausting air out the back, and needed a place to route the power supply. 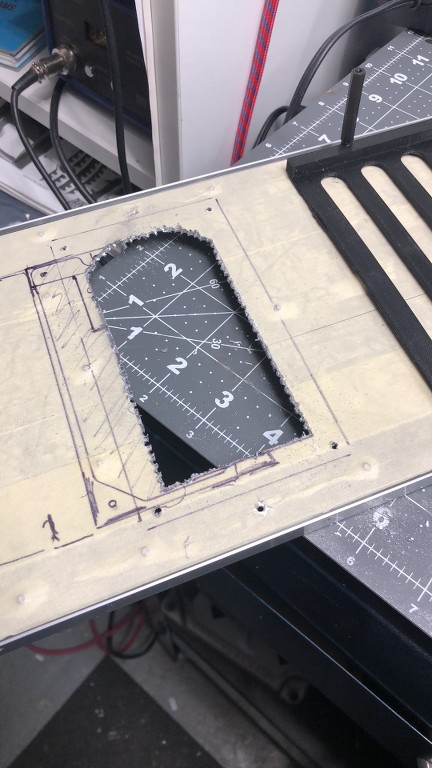 Once the holes were cut, I printed some TPU brackets to hide the shoddy (and sharp) cuts and the clean up the build. 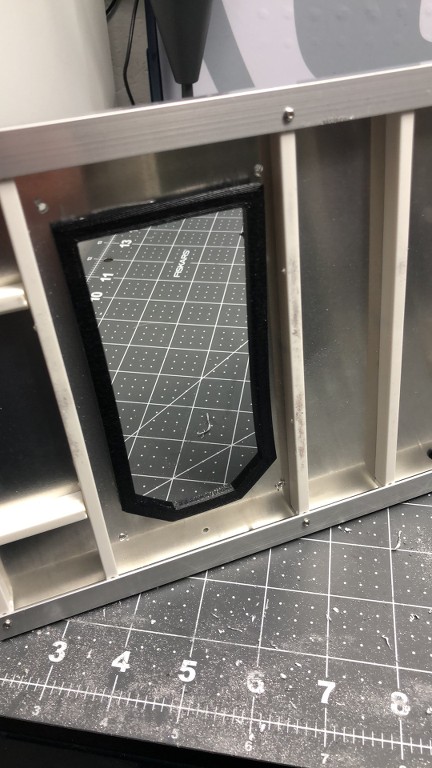 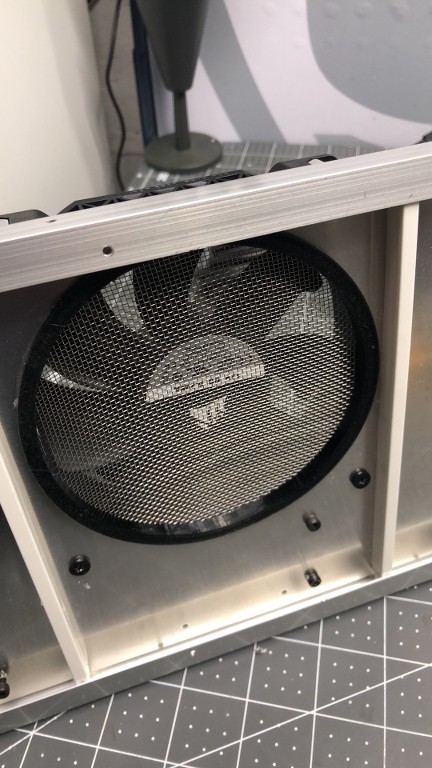 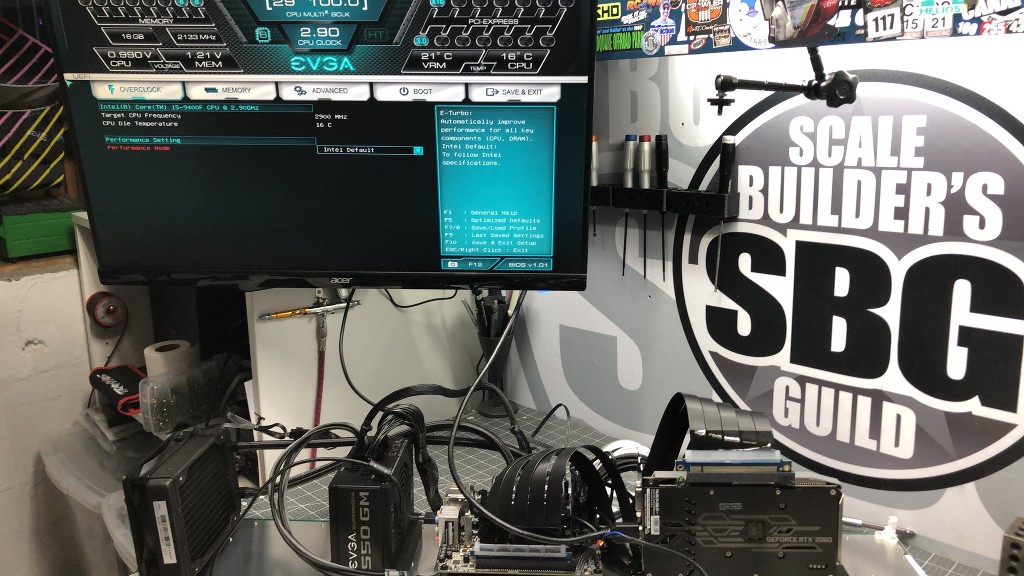 This is such a cool build. I love watching high end PC builds on YouTube. This is combining best of both worlds for me.

wesmade said:
This is such a cool build. I love watching high end PC builds on YouTube. This is combining best of both worlds for me.

Thanks Wes, it's definitely different. I don't recall ever seeing a PC built into an RC like this before.

I wanted to give the trailer container the same treatment I've given the cab. So I got to painting. 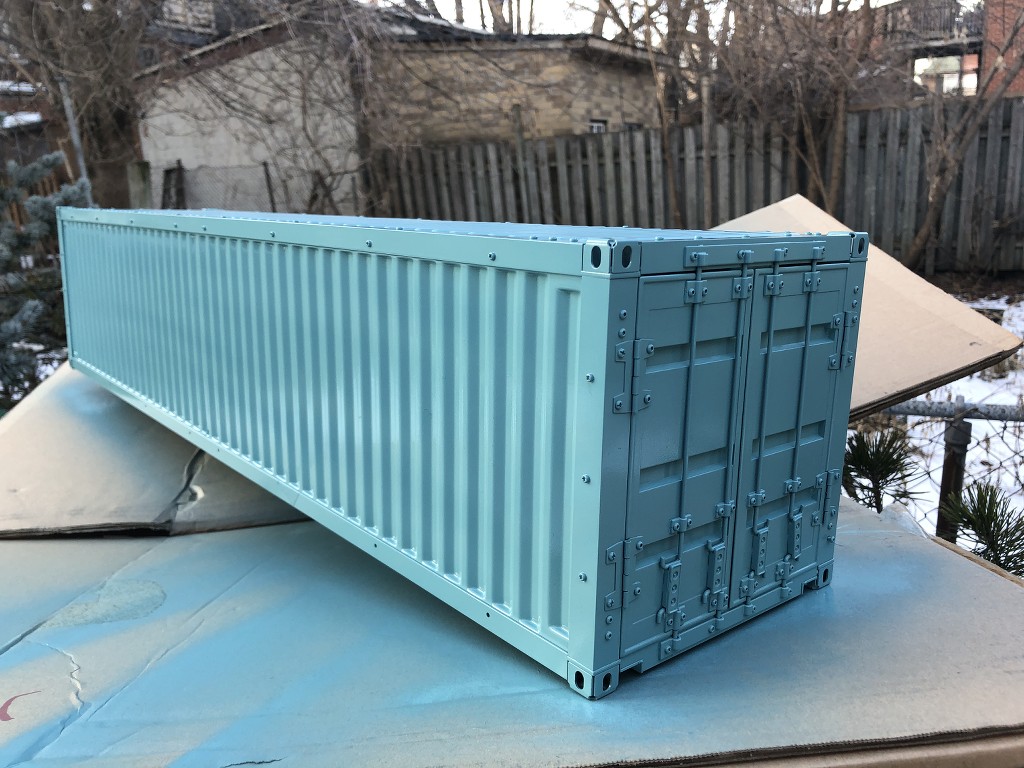 Ah, the joys of Canadian winters and homes without garages. Not ideal, but should wok to my advantage for the look I'm going for. I used some hardware store spray paint as a base layer that has a primer built in. Then I shot it with some Tamiya PS Cobalt.

Cut out some stencils on my Cricut for the two main contributors to this build, EVGA and Tamiya. By the way, if you're into computers, and want to save a few bucks, use code: SBG at checkout on http://www.evga.com 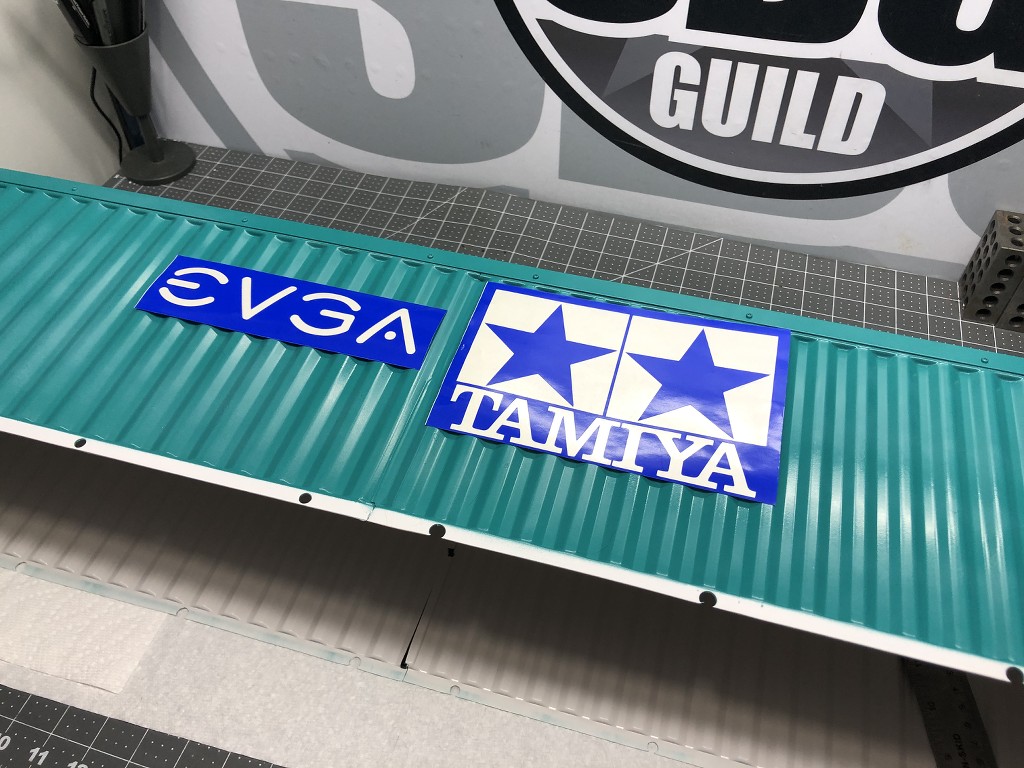 I like this Cricut machine, it's come in quite handy. Note to self, use the less strong adhesive vinyl next time to avoid all the peeling of paint when you remove the stencils. That said, I was happy with the distressed look that it helped create. 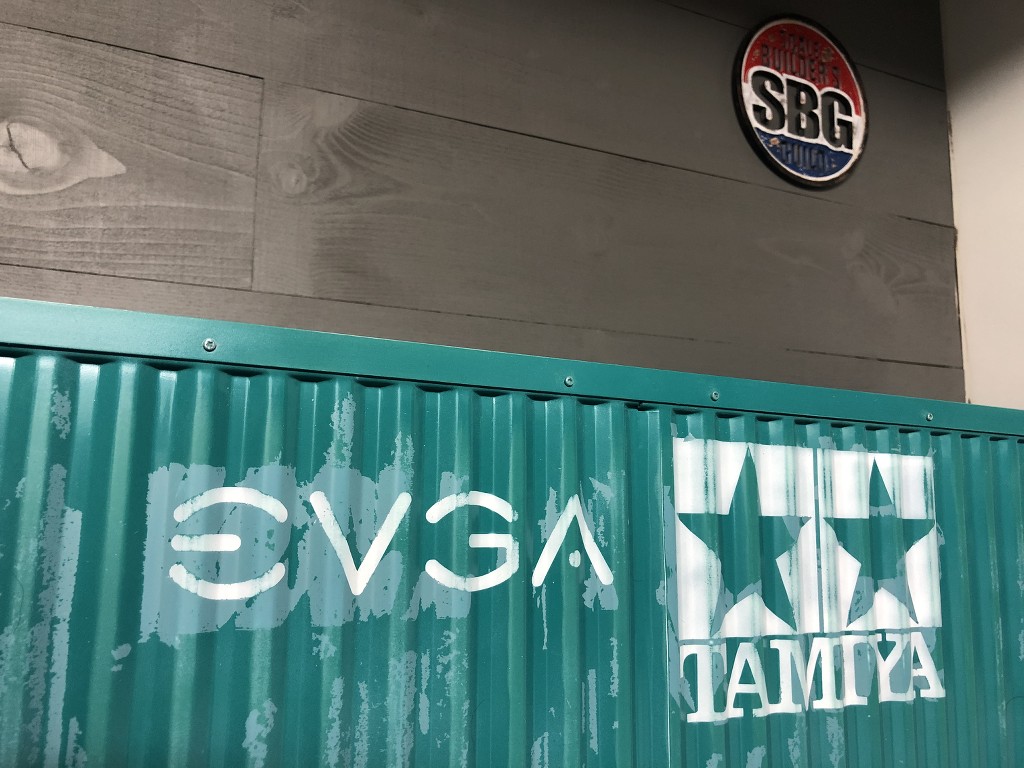 To make it look abandoned and crappy, I started airbrushing some tags/graffiti. This is stressful work. Freehanding this stuff so small with a dual action brush is NOT easy for me. I'm still pretty pleased with the results. 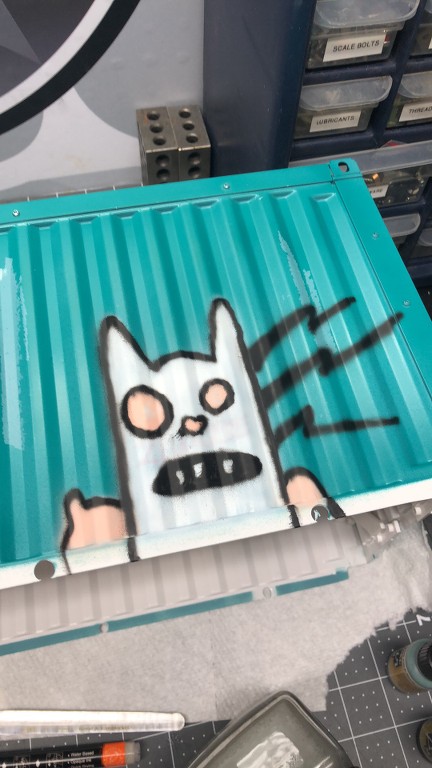 I took pictures from around my neighborhood to find some nice accurate artwork. 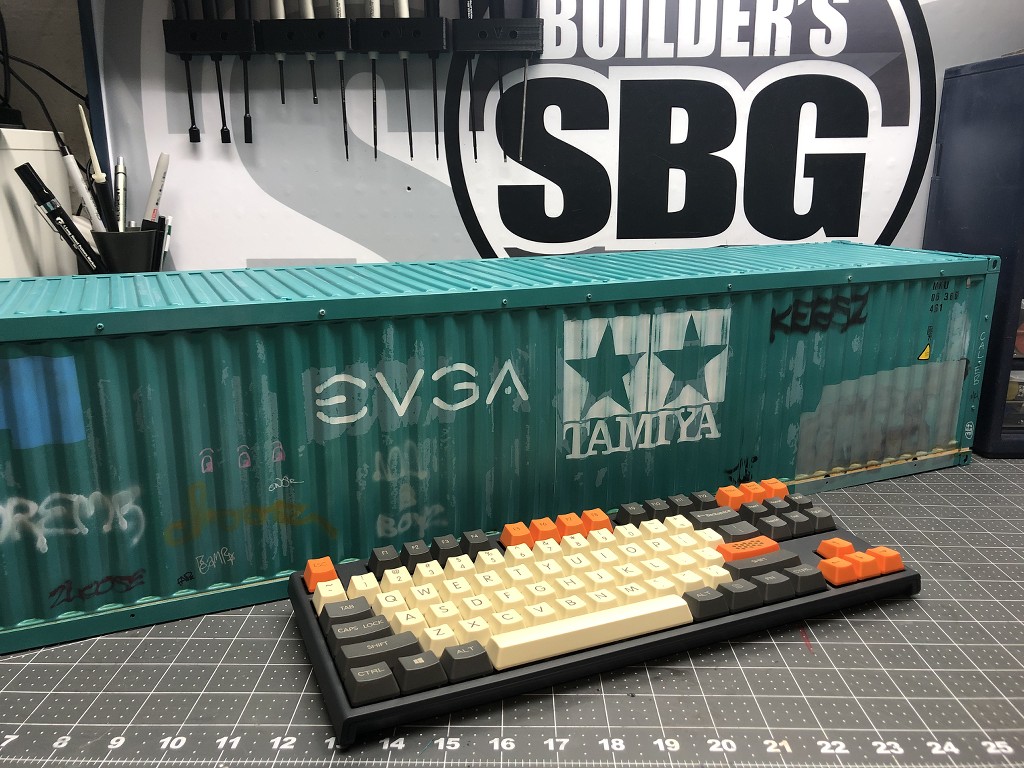 The end result. On to the weathering!
M

Well that looks nice and crusty! Like it just came from a train yard in L.A.

It?s funny that you look for paint mistakes when weathering your try your best to avoid in a regular pint job. When I painted the COE, I purposefully painted things before dry and or got sprayed chemicals on to make the paint react. I had no way to know what would happen, so I just went with the flow.

Really digging how this build is coming together! Very cool rig.

Any idea what type of game they might be doing this for?

Since there's already graffiti on it, somebody needs to tag that with a SBG...

Frizzen said:
Really digging how this build is coming together! Very cool rig.

Any idea what type of game they might be doing this for?

Since there's already graffiti on it, somebody needs to tag that with a SBG...
Click to expand...

They're not doing it for any game. We're building these to our specs, and playing whatever we want on them for testing. Once that's all done, we'll probably ship them to Tamiya and EVGA and let them use them for displays at tradeshows and stuff.
L

such a crazy idea, and awesome work. Love the whole paint job.

I've been following this on the Youtube side, nice to see the thread. The paint job both on the semi and the trailer are excellent. Makes me really wanna build a shipping container just to paint graffitis on it. Those oil streak thingys are neat!
C

love the paint on the container!

CrawlingFinn said:
I've been following this on the Youtube side, nice to see the thread. The paint job both on the semi and the trailer are excellent. Makes me really wanna build a shipping container just to paint graffitis on it. Those oil streak thingys are neat!
Click to expand...

cooper said:
love the paint on the container!
Click to expand...

Thanks guys, it's been a fun process so far. Not a ton of progress, but I did design this I/O/Fan Radiator in Fusion 360, and lucky for me, it fits absolutely perfectly. 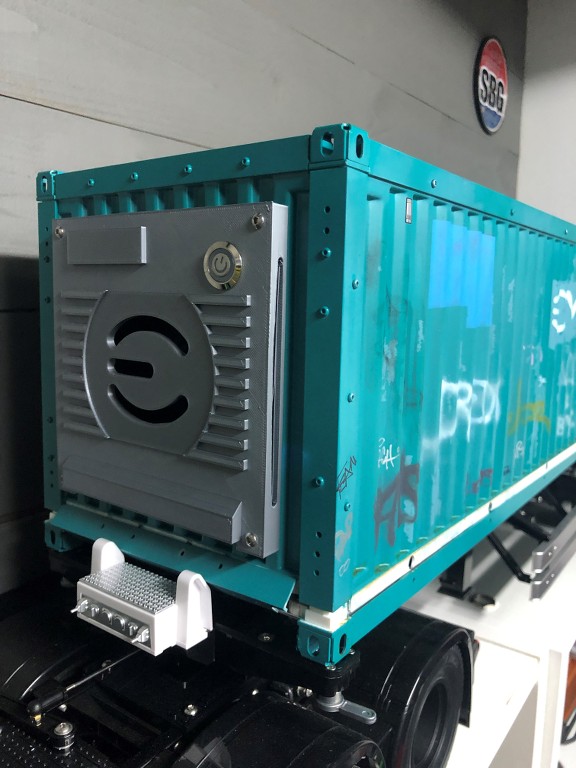 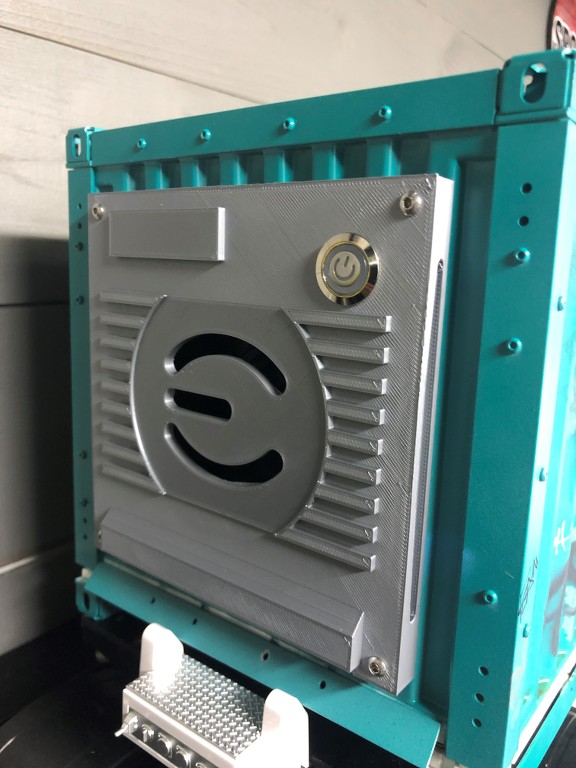 I'll take it off, add some mesh behind the EVGA logo, and sand and weather it to match the rest of the trailer. Very chuffed.

Oh, I also ordered this tiny little screen, and there's a program that goes with it that shows off the system stats, like temp, load, etc. It's very cool. I'll make a little frame for it and mount it on the door at the back. 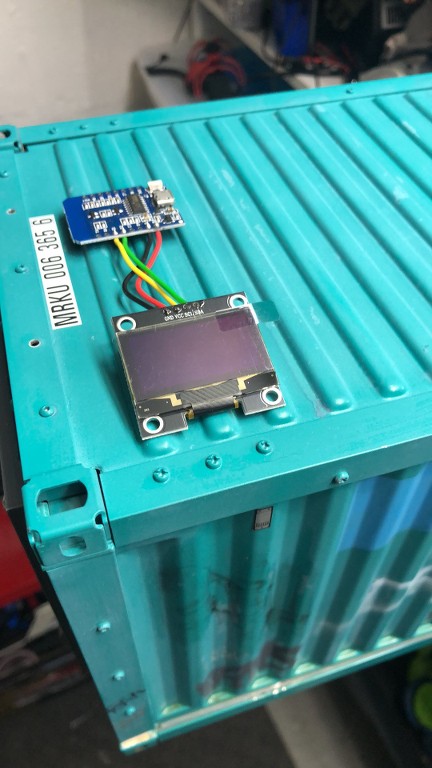 better and better...they approached the right person
B

Just an awesome build. The weathering and graffiti are a nice touch. I'm looking forward to the driving test you and Josh are going to do.

Finally got a charger

Awesome to have an RC that could log on to the forum, to look at the same RC you went on the forum with! Rc Inception! Haha

Just went through the build again, because it's great motivation to customise my PC. Used to spend weeks on a build

Anyways the thing that just came to mind was ventilation - do you have enough space in the floor to push air out? Could make for a great effect when you power up and the dust blows out from beneath the truck