Inspired by Youtube videos made by Wesmade on the Datsun i started to work on a conversion of my old virtual model i built 14 years ago for a small game i worked for as an 3d artist.
Now i got the idea to bring the model out of its virtual existence into the real world.

This was one of the most fun to drive vehicles i ever owned.......undortunally not sustainable, because even 1987 the spare part situation was extreme suboptimal.

Lets get to the car, which i am sure is unkown to 99% of the people.

Simca 1200s was produced only a few few years from late 60ies to 1971. It was based on a Simca 1000 chassis and got a body shell from Bertone. The engine was enlarged to a 1200ccm engine with 85hp. That car actually made 180kmh........only limitation was the countryside had to be totally flat. Even the few mole hills we had around Hamburg were enough to slow it down considerable.

I have some very limited experience in scratchbuilding, in fact none. The only thing i built was a balsa wood aircraft in 1:10 scale and some foam waffles.
And since i always constructed either for games or visually pleasant screen pictures i of course went into wrong paths in the beginning.
Construction for visualisation differs greatly from constructing for the real world i noticed, so basically the 1st day of working on the project was pretty much useless. At least i refreshed my rusty 3d skills a bit.

1st attempt was to give my body thickness (with a lot of manual editing to remove all the mesh errors in the innerside of the body at tight corners like headlamps etc).
The idea behind that was to relate on boolean operations to get the rib outlines i need for the cage i want to build. I wasted around 14 man hours on that. Of course the boolen operations still suck.....not that much anymore like 15 years ago, but they still suck.
Also the new body shell is way too detailed for a rib cage, stupid me......

So here are my beginnings:
visualizing where i want to have my ribs 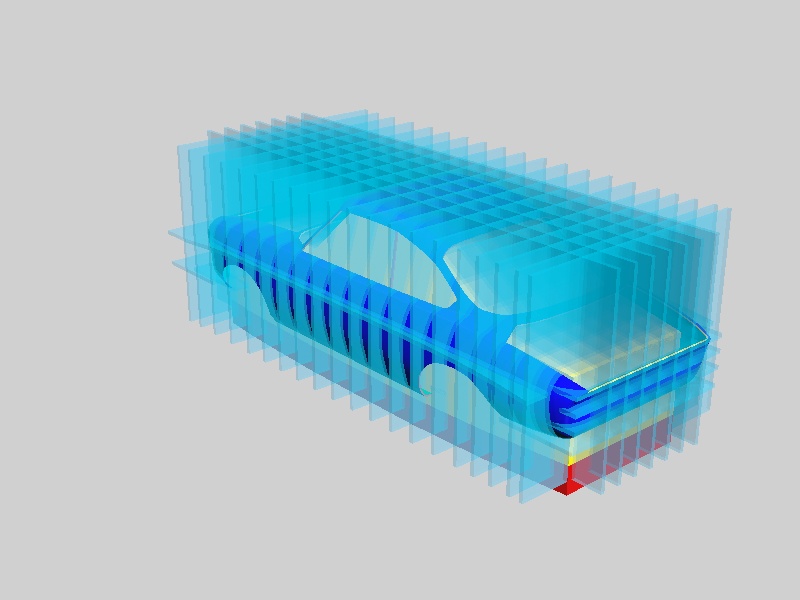 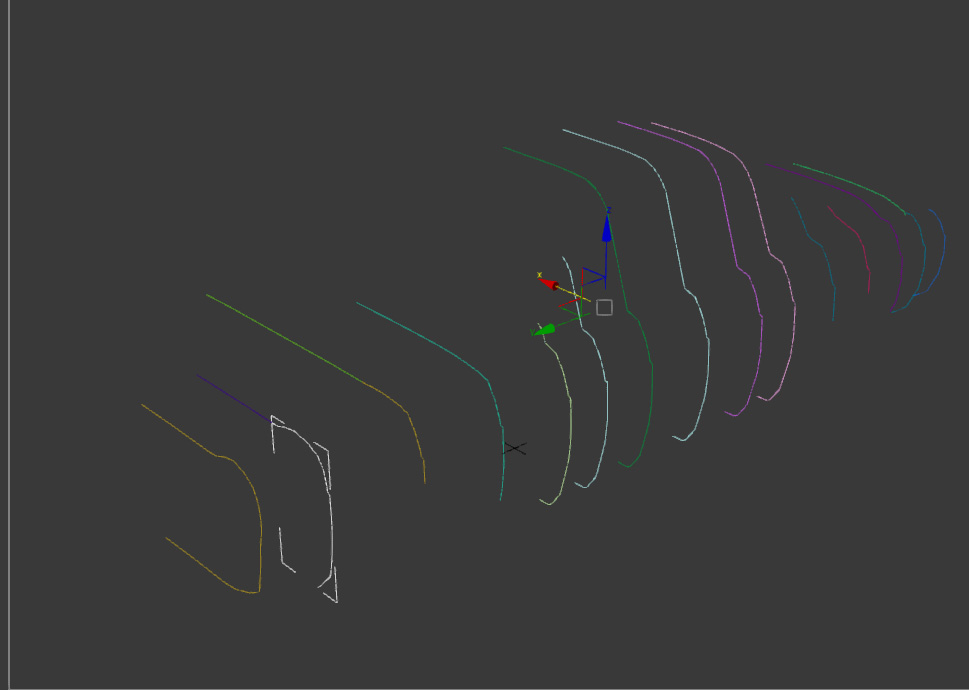 Thank you,
this is mostly as a therapy for myself to reduce my smoking.
Unfortunally working on a computer doesnt help, but the time my hands are busy with modelling, let it be wood or any other material, then the urge to smoke vanishes for hours.
Also, if my skills fail me, then i still could go to FabLab and print it out.
L

Small update:
While searching for Simca +RC i found a dedicated Simca fan and modeller in southern germany. I contacted him and he als knew Hans Exner personally.
Funny enough i could help him with missing decal graphics from my old game texture.
Damn, and i hoped my project would be unique

Stay the path on this one.
I see beautiful lines on it and it is different.
Would love to see this come about.

Not sure what a Simca is, but your 'Car in Jello block' looks neat.

Wonder if your sliced rib car idea might be able to work as like cnc toolpaths? Then you could make a loaf of mdf slices into pixelized car to sand on until you get blacklung. Eventually letting you vacuform the body over that buck, and have many lexan Simcas
L

Yeah, was thinking about that too, but i dont own such machines.
Need to keep it cheap, but i think i will continue on the 3d model with cnc and 3d printing in mind. So if 1 path fails i can switch to another.

As growing up in southeren Norway (Grimstad) in the late 70s/early 80s I did see a lot of Simca's in my area, may been the the capitol of Simca back then lol, it did felt that way anyway

1200 Bertone was rare even back then, and I can't recall see any of them at that time or later here in Norway.
The Bertone was sold here as Simca 1200S as far as I know.
And we have a trackable licence plate database here (license plates follows car, not owner), and there was no 1200S listed so I think it was rare even if it was sold new here.
Took a quick look at the 500 Simca's listed and most of them seem to be scrapped long time ago.
Living age of Simca's was not the best, don't think Chrysler quality made it better either lol.

And Bertone is one of the best car design studios that has ever been.
I still love the wedge cars from them.
Among cars Bertone designed was the Fiat X1/9 and Volvo 262C.

Very cool plans, hope you find the means to create it- cheapest way is bend and sand some styrene but it's awfully curvy!

I wonder if you can use parts of the Tamiya A110 Alpine body?

They seem to share the shape of rear hips and the wheelarches on the real car...
To me they do anyways..
L

Yep, i already have M-06 or M-08 chassis in mind. wheelbase in orginal is 2,23m and the m chassis give me 225mm, so i can stay close to the original dimensions.
L

dagabba said:
Very cool plans, hope you find the means to create it- cheapest way is bend and sand some styrene but it's awfully curvy!
Click to expand...

Im extreme sexist if it comes to cars, they need to be like women........curvy and also have their own mind

Lem said:
Im extreme sexist if it comes to cars, they need to be like women........curvy and also have their own mind

Getting closer to printing on paper. Maybe today or tomorrow i can start to build the cage outside of the virtual world. 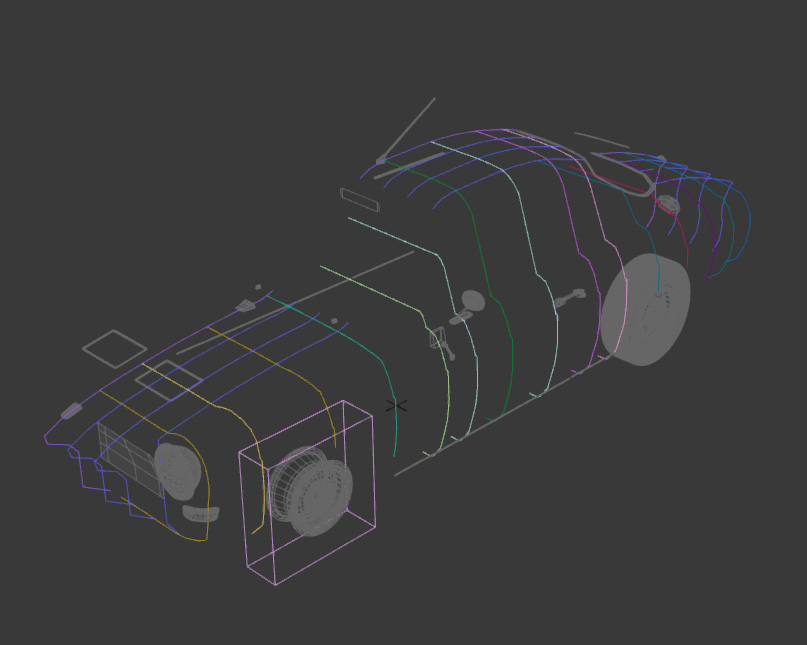 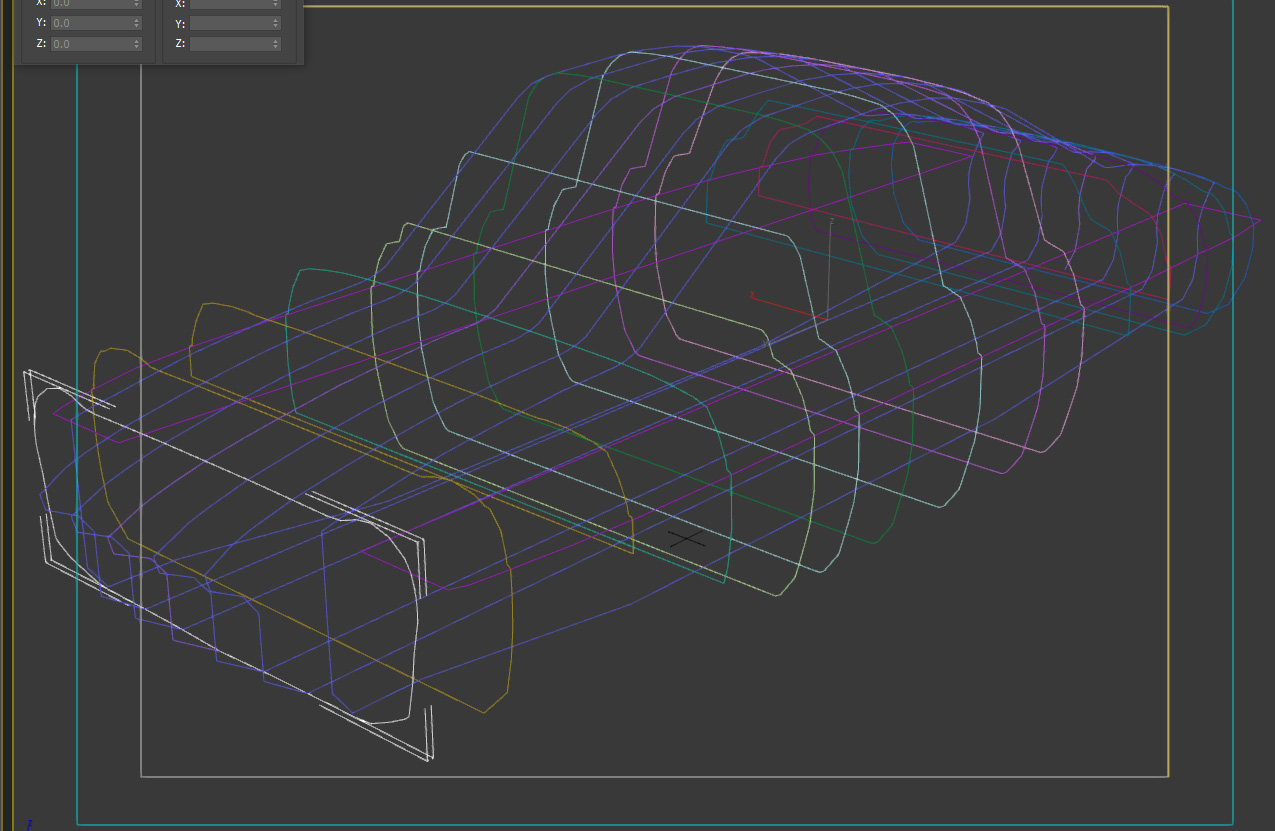 And im not that intelligent like i wrote earlier, i bought a used m-2 chassis with extra parts.
L

Fuck me dead, i am out of ideas.
Spent most of morning in knowledge base of Autodesk, this time trying to include the inner box into the outlines..........great solution offered there:
You need to redraw all shapes, then the boolean operation will work. I ignored that and did it manually. So far so good. 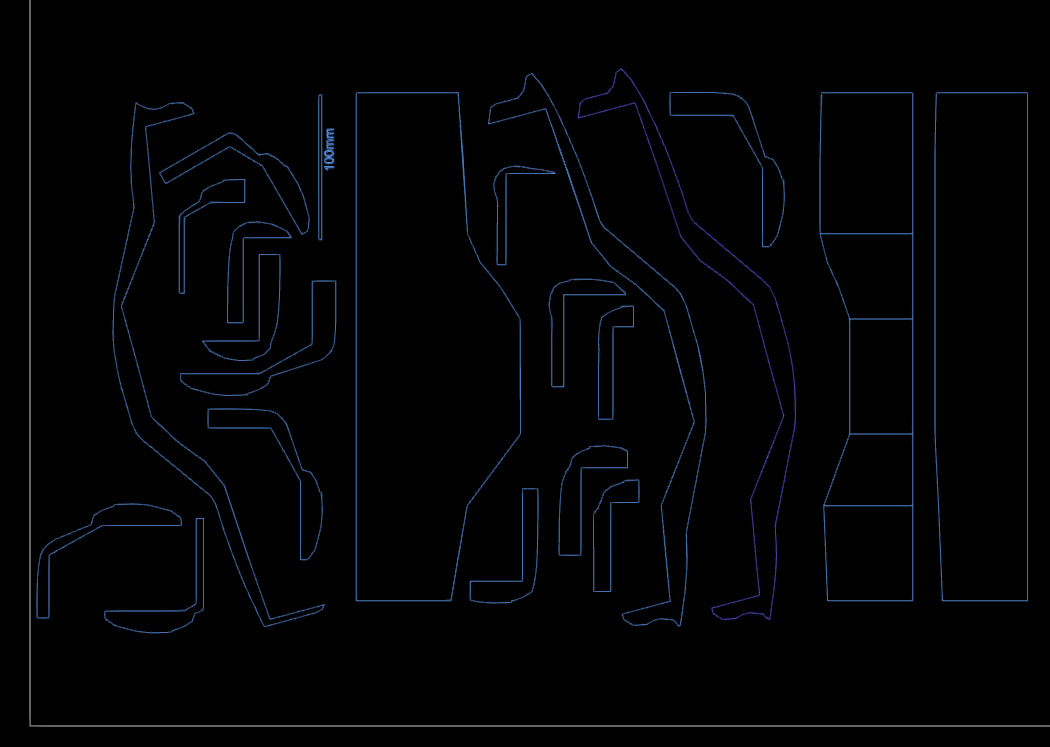 Started exporting selected objects into various formats (dxf, dwg, ai). Tried to import into inkscape......Error messages about polygon lines........i dont have any polygons anymore in the scene, only 2d shapes.

Resetted all shapes, did a transform and rescale object (that usually makes sure everything gets exported without distortions).....no success.

This time i tried to put the dxf file into a StarOffice document.....StarOffice can read dxf files.......it loads and then displays only an empty frame.
I redraw a shape manually for testing, same result, but now a different outcome in inkscape. inkscape loads the file without error this time, but the whole grafik looks like extrem fat letters overlapping eachother so everything is black with a few holes in between.
Ok, i have no ideas left, my frustration level reaches maximum.
To cool down i went outside into my backyard to remove fallen leafs. I would have never imagined i would do THAT to calm down and relax.

So my next idea was to render it out as bitmap, then vectorize it and scale it manually in inkscape, but that sounds soo batshit crazy, that i refused to do that yet.

Success, files load in Blender without error messages, also in an online viewer. test file sent to my friend, who can print in Din A3.
Waiting for an answer.
If the file is ok, then i send it to another friend, who laser cut the parts. He cant laser styrene, so the cage will be made from acryl.

Out of interest (maybe you have already posted this) - what software are you using to create the sections? And continuing on from this, to try to understand the issues correctly, I gather you managed to create a 2D file in your software's native format, which you then tried to export into dxf and dwg, correct? You then tried to import these files into various other packages? Did you try Fusion 360, another Autodesk package? Also if you try to first print on paper, were you not able to export your native 2D file into pdf, which you can then use to print?

Thx Rally,
well i never even tried to bring my models outside of a computer, all my 3d work in the past were either for games or professional simulations like Steel Beasts Pro (training program for european army) or ATC training simulators (Airbus).
It was box- and low poly modelling and 2d shapes i only used in the modelling process as substitute for the never working boolean operations. They never had to be exported, they got deleted, since they were only helpers to align vertices or faces.
for the Simca i use now a 30day trial version of 3d studio, because all my past work was done in 3ds max (i stopped working as 3d artist in 2006, so i stopped keeping my stuff updated and now i also dont find my hardware dongle anymore).
1st i only wanted to use 3dsmax to convert all my models into other fiile formats so i can use a free software like Blender.
Since i wanted fast results, so i can start modelling in the real world i decided to use 3d studio for this and switch to Blender after the Simca, my plan is to model all my cars i owned in the past (Volvo PV544, Karmann Ghia Type 14, Simca 1200s, Citroen ID19 and DS21, Morris Minor, VW Beetle). As you can see, the only models which dont exist as RC models are the Citroens, the Volvo and the Simca.
Switching from one package to another means learning to get used to a different user interface. That time to relearn a different program will come for the next projects.
The option to get parts laser cutted came from a friend, thats why i went the route to create all the shapes in 3d directly from my existing model.
The original idea was using only paperprints and do manual cutting.
My problems were, that for this kind of work you have to setup the program correctly, which i never learned. I never needed to and for game modelling or renderings i use at most 10% of the whole packages features anyway.
Also every method of modelling needs its own workarounds, for poly modelling i know the tricks you can use to circumvent the issues.... for CAD or 2D spline modelling i have to learn these 1st, thats why i ran into my problems.

Anyway problems are sorted out, test prints on paper in Adobe Illustrator worked fine and the dxf files are now sent to a friend. The cutted ribs i should get sometime next week.

Feeling your frustrations....but very excited to see this start coming to life.
Luck in your journeys on this.
Watching closely here.