So I guess it might be time to start a thread for this project I have had going for over a year now. I have been dreaming of a 6x6 mudturk for long time. Mostly because of the Spintires, Mudrunner and Snowrunner videogames and these builds:
Full metal Kraz 255 by Bishops RC
Ural 4320 Log truck by Bishops RC
Kamaz 4310 by ToniS (Finnish thread only)

Don't get me wrong, there are many other very cool trucks too but these trucks I have seen in person and actually even driven the Kamaz. That is also reason to the odd scale of 1/12 as I want to fit in with the cool guys

Originally my plan was to scratch build Kamaz 6560M, also known as Azon 5319 in Snowrunner, from steel but it is very rare in 6x6 configuration, it is mostly seen in 8x8. So after long contemplation I couldn't get over that fact and ended up going with Ural Next, also known as Voron Grad in Snowrunner. Idea is to end up with something along these lines but less military color scheme: 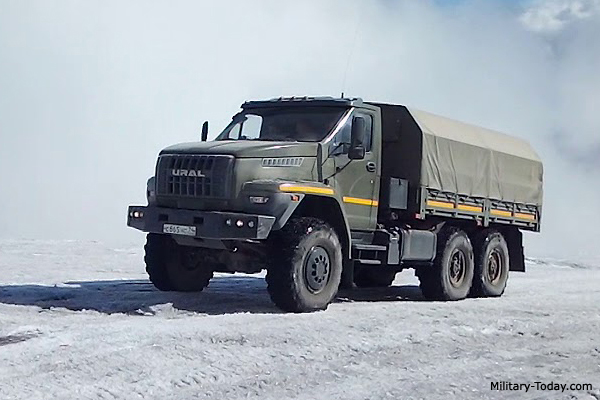 This cab was too complicated for me to form from steel but luckily enough I found a 3D model of the cab from Cults: Ural Next Truck Cabin 3D Printing Model. It is advertised as "3D printing model" but that is a little bit sugar coated. It is 3D printable but it is not optimized for printing. But it is doable. Earlier this year I upgraded to Ender 5 Plus and then upgraded that even more with pretty much new everything on electronics department. I have already printed some parts, biggest one being the hood and front fenders and I am currently printing the main part of the cab. Let's hope it all goes well and on Sunday I will have the cab mostly printed

And now You might think "What has he been doing for a year if he is just now printing the body?", well mostly nothing. But I do have the frame somewhat started. Here it is in it's current form: 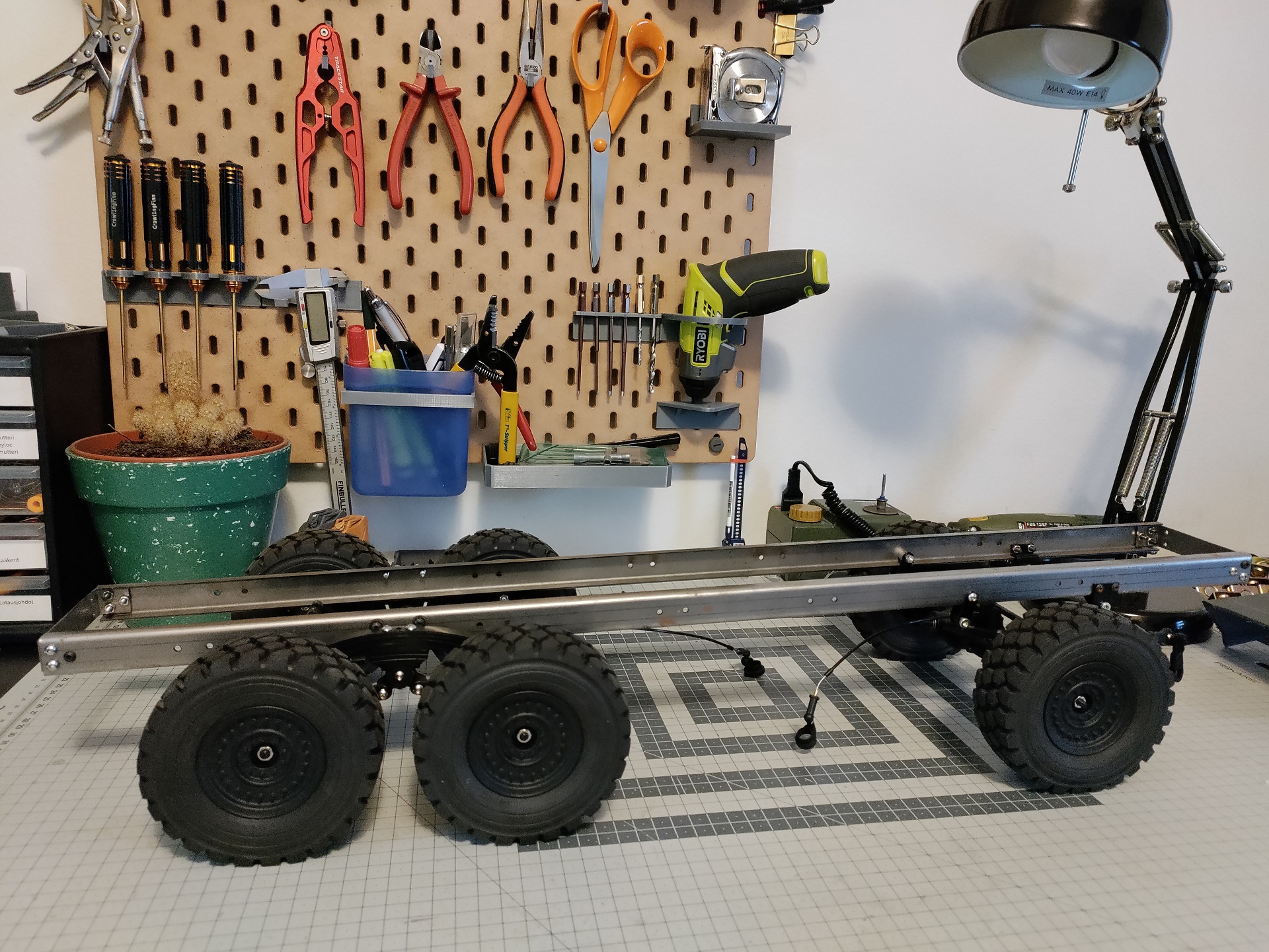 Unfortunately this thing is too big for my washing machine top or my scale garage so this thread will have mostly bench photos. I try to avoid having a huge mess on the photos to make this thread at least somewhat aesthetically pleasing. Bear with me!

I designed the frame rail by myself and had the rails laser cut and bent at a shop. How ever when I designed it I was still planning on making it a Kamaz 65123...whatever...M so the front axle is too far back for Ural Next. I will deal with that as soon as I have the cab printed so I can decide the exact spot for the front axle. In this position there would be a little bit extra on the front: 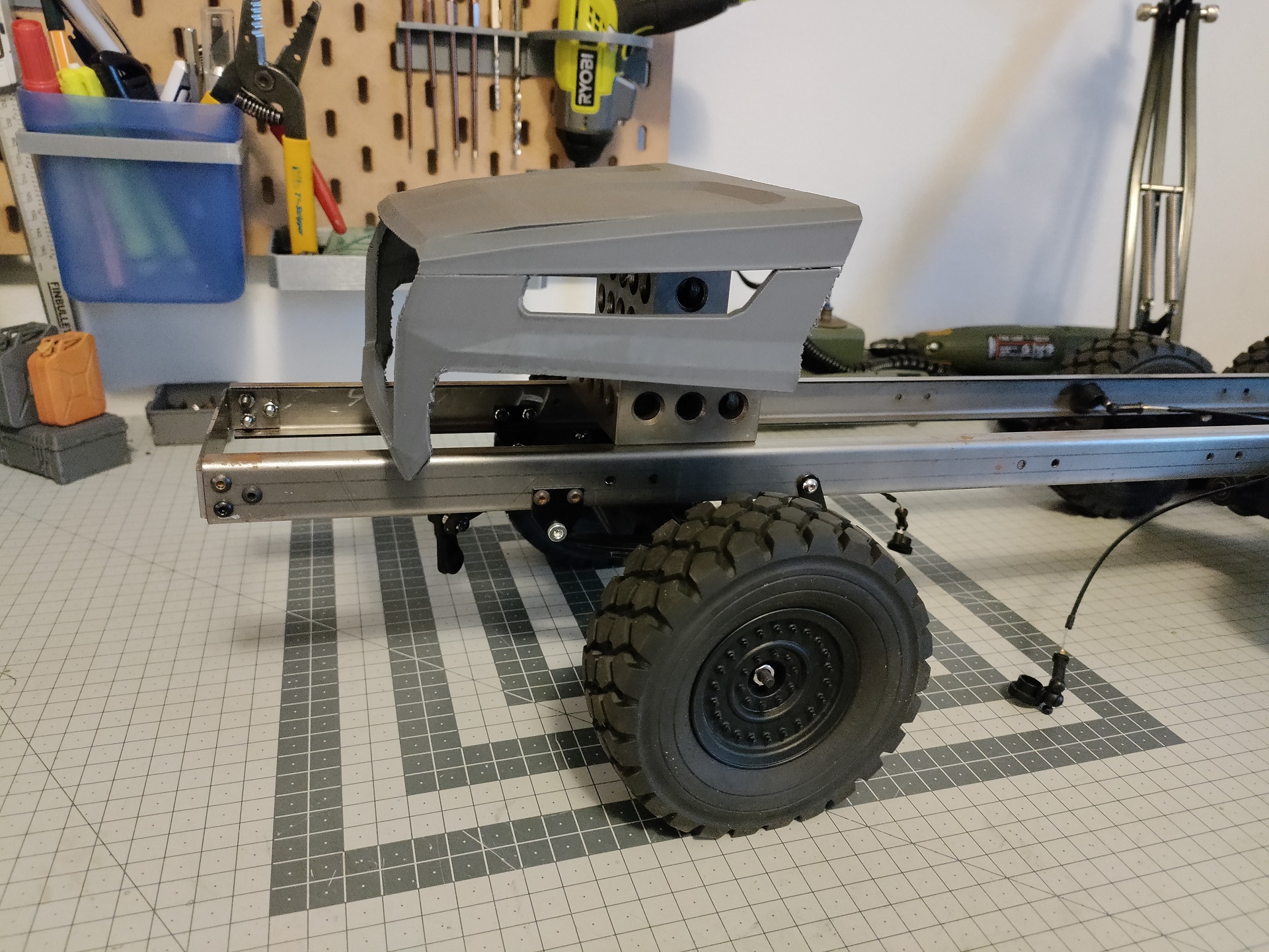 The suspension is a spare part kit for a Cross-rc HG6 or something. It is pretty neat kit, comes with leafs for front and rear and includes a bunch of little doodads to mount everything.

For axles I ended up getting TRX-6 axles, mainly because I wanted select-able diffs. With SSD RC pörtal deletors I was able to make them functional axles for this project. Portal delete kits also make the axles a bit narrower which was good. To pair the axles with leafsprings I designed small brackets and had also those laser cut. 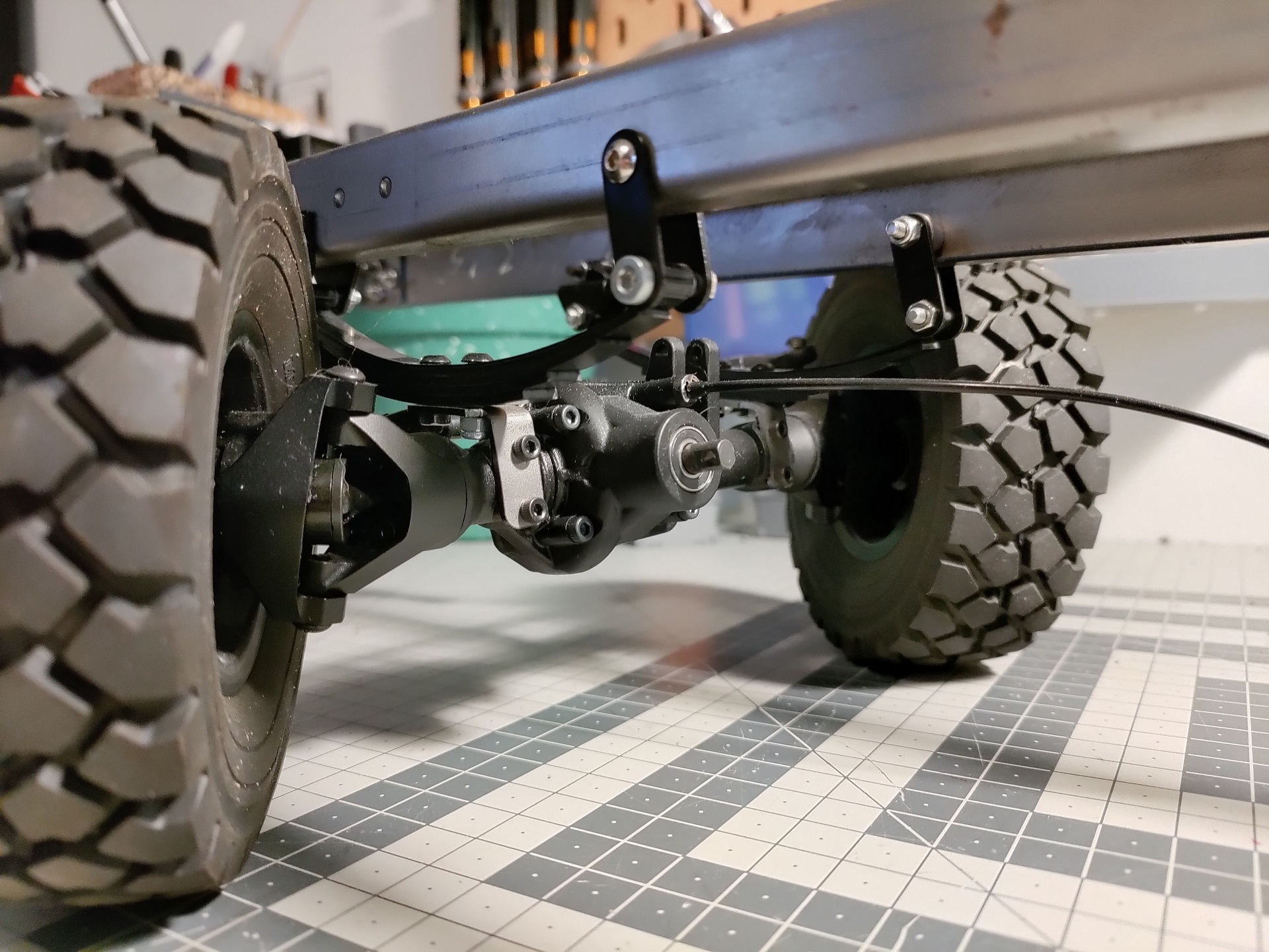 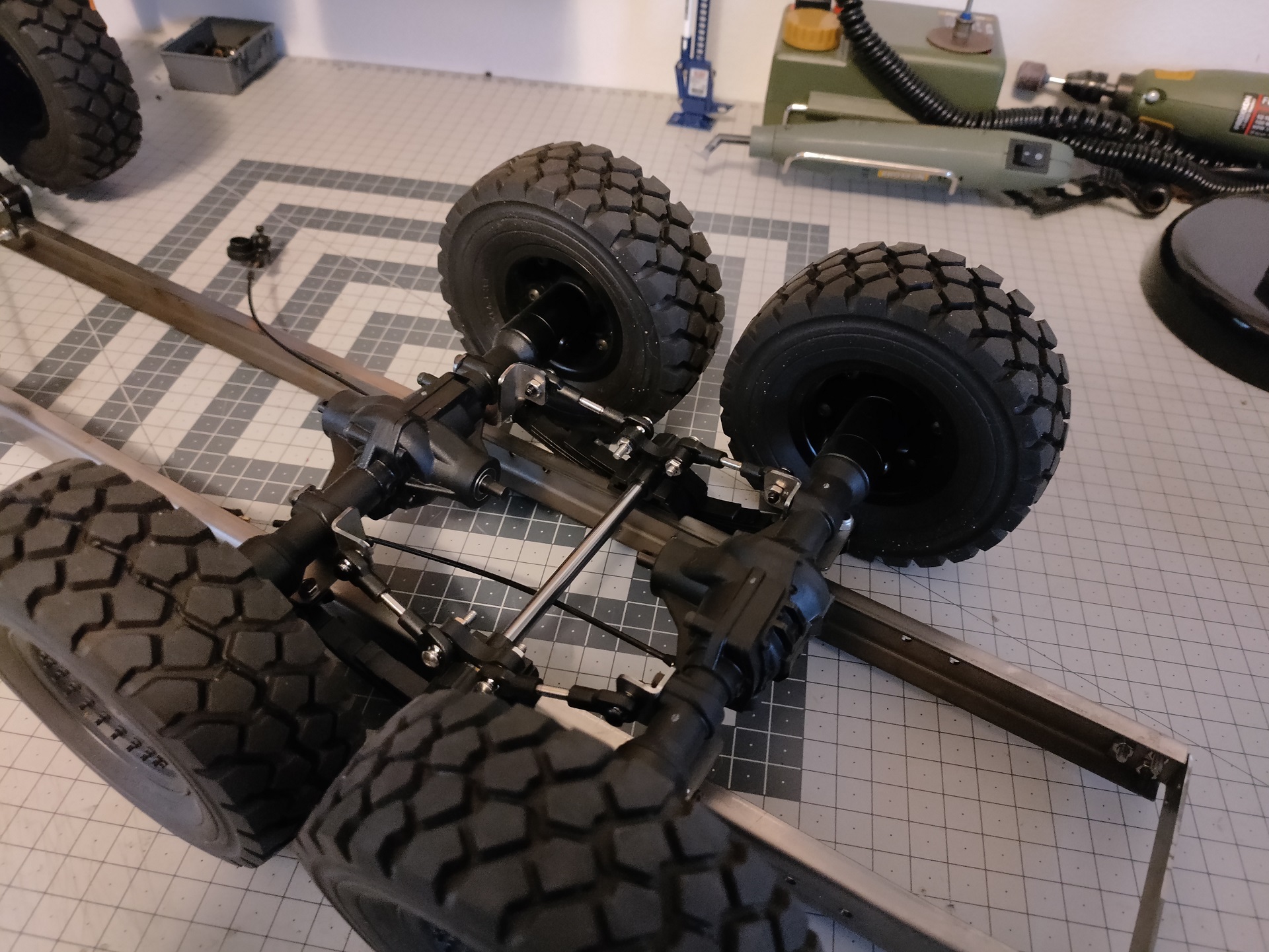 Tires are from RC4WD, 1.9 MIL-SPEC ZXLs. The outer diameter is 4.17" which is pretty scale as the real trucks seem to have tires around 48-50" outer diameter. Wheels are from Axial UMG10 6x6, I scored seven of those from a fellow hobbyist. I usually prefer metal wheels but I think that on this kind of slow 6x6 they don't matter that much. I will weather these to look less shiny and plasticky.

For driveline I have a Kingkong rc transmission and a Boom racing SWD transfer case. So I will be able to have the turk in either 6x4 or 6x6 drive. Although with the selectable diffs and now selectable transfer case I don't have a radio with enough channels to handle everything

To be continued on Sunday...

I'm definitely liking what I'm seeing! Mil-spec is a perfect choice for this.

Well I hope I can deliver!

imthatguy said:
I'm definitely liking what I'm seeing! Mil-spec is a perfect choice for this.
Click to expand...

Thanks Matt! I like the look of the Mil-specs too, luckily, as there aren't many other options in this size. 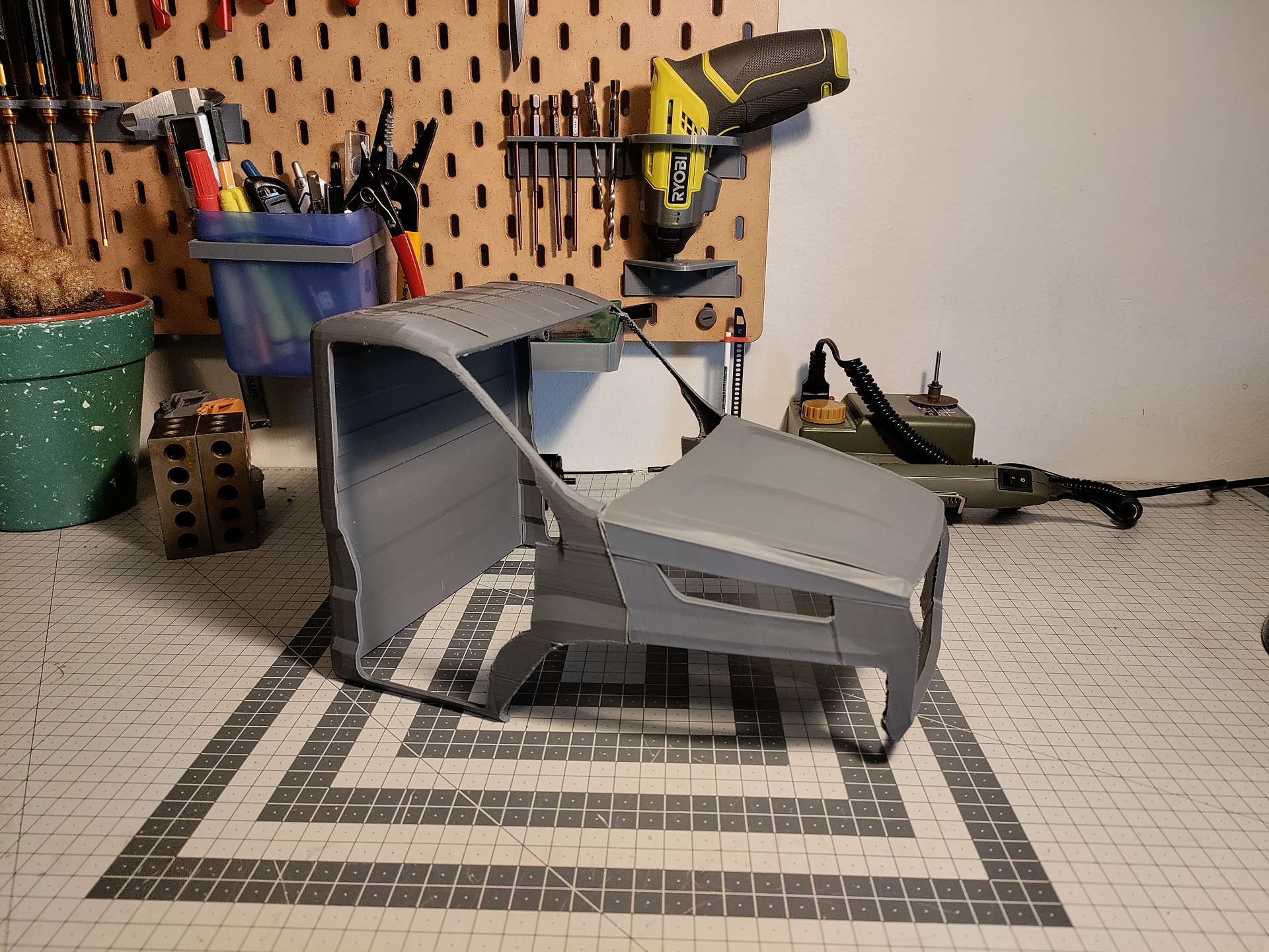 Got the body printed and it turned out ok. There are some issues with the model; some weird gaps in the back wall and the hood does not align properly with the body but nothing major. I will fill the gaps with styrene and some epoxy and make stuff align. I knew that the a-pilars would be difficult to print and yet I didn't pay enough attention to them while slicing the model. I printed them without supports and they almost failed. It would have ruined the whole print but luckily they didn't. I will probably be able to make them ok with a lot of sanding and filling but if that fails I will cut the a-pilars out and make new ones from styrene. But before sanding anything I will print the doors and other remaining parts and put everything together as that will support the a-pillars and make it easier to work with them. 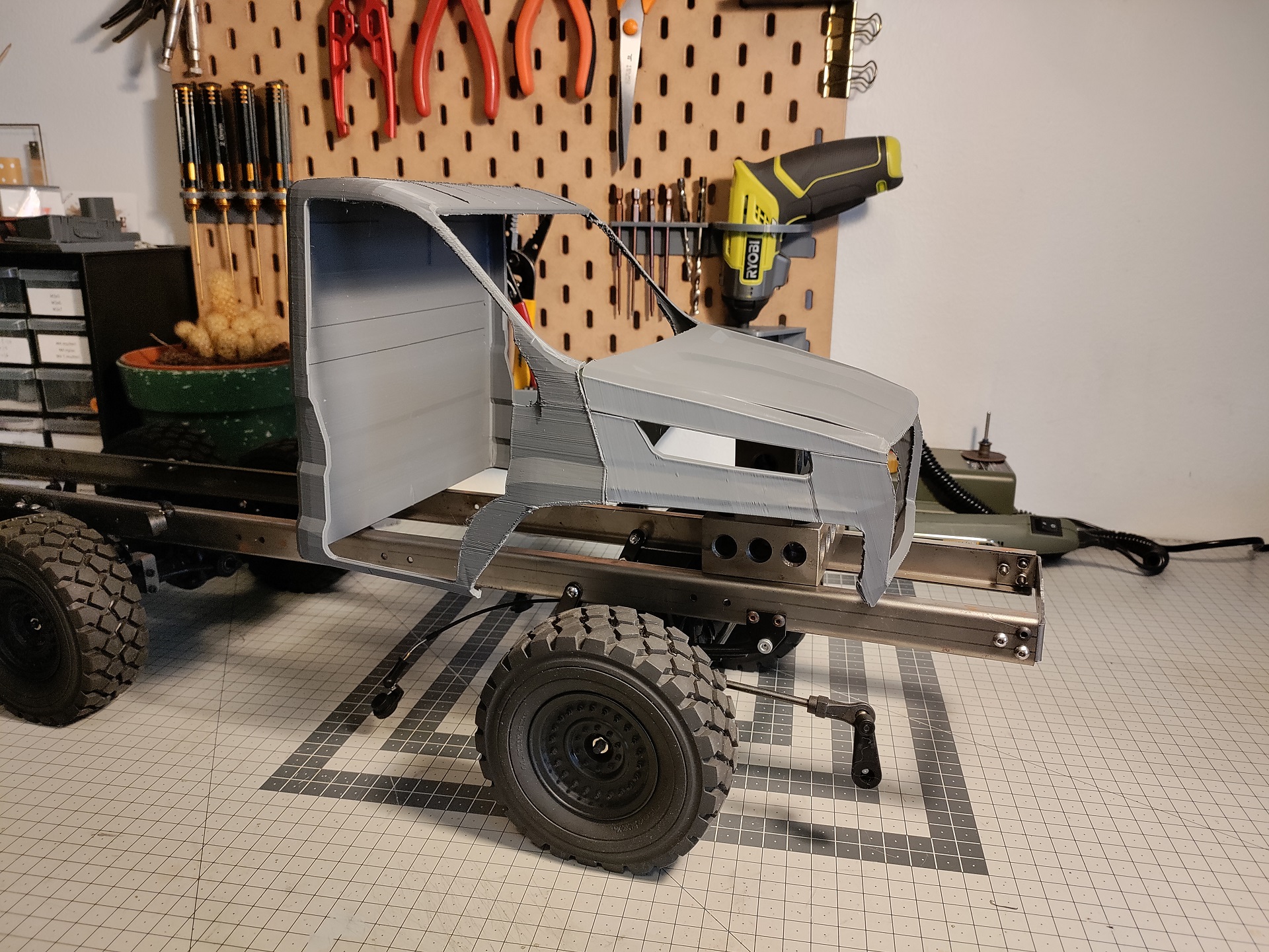 With the current front axle position this would be the cab position. I did some measurements and decided to move the front axle so much forward that the grill will be at the front of frame rails with out shortening them. There seems to be couple different wheelbase options for the 1/1 and this will be pretty close to the longer version. Plan is to have a bed long enough for a 1/12 scale 20' shipping container, which is about 510mm long.
You must log in or register to reply here.
Share:
Facebook Twitter Reddit Pinterest Tumblr WhatsApp Email Share Link
Top